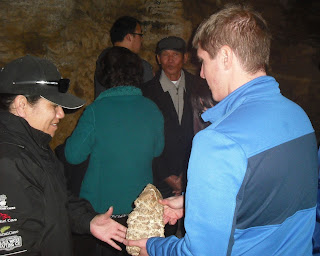 You can't appreciate a country from one big city.  Our son, Michael wanted us to see more of his adopted country, New Zealand than just Auckland.  Four of us packed in a car and traveled over 1600 kilometers around the North Island in a week.

First stop was Waitomo for the glow worm caves.  We were disappointed you couldn't take flash photography, but it was an experience.  We were told that the acoustics were so good that special concerts featuring the likes of the Vienna Boys Choir have performed there.  Glow worms were pointed out to us and at first you could barely notice them, but gradually as your view took in more of them you appreciated the uniqueness and beauty.  At the end of the walking tour we were put in boats and told to be quiet.  Of the whole trip the feeling of awe was strongest on this gentle boat trip.  In another cave we walked a great deal and took loads of photos.

From Waitomo we had a long drive that took us through curvy mountainous roads that included a little snow before we reached our next destination, Wanganui, sometimes spelled Whanganui.  A local resident told us that New Zealand produces a lot of racing drivers that got their training going through the mountains.  In the off season we intended only a sleepover, but the next day we were directed to the Durie Hill Elevator, the only underground elevator in New Zealand.  At the top we walked up two monuments that gave an excellent view of the town and of the Wanganui River. 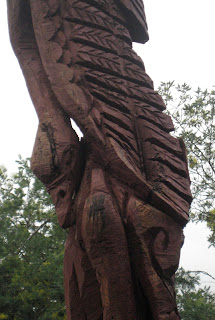 While there we encountered a man walking his dog who suggested we might like Virginia Lake which I could not recall from any tourist literature.  In the middle of a residential area it proved to be quite the gem.  In one section they had many birds in a confined area that were very colorful and entertaining.  Just outside were more domesticated birds like ducks and chickens. Next we entered a winter garden that had very warming colours. Back outside we circled the actual lake with lots of interesting wild birds and trees.  One of the highlights for me was a carved tree still in the ground.  The Maori design was very intricate.

Our next destination was Wellington, the capital, not as big as Auckland, but with its own unique atmosphere.  Our hotel was located right on Cuba Street full of interesting restaurants and shops.

One of the first attractions we visited was the Te Papa Museum-. Again a lot of emphasis on the Maoris and on relevant geological developments.  One of the better museums I have been in.

One brand that has made the world more conscious of New Zealand has been "Lord of the Rings". We visited the Weta Cave that has many of the artifacts on display and has a film that outlines effectively the contributions of the staff.  I had not realized they have been integral to many films I had thought came wholly from Hollywood.

We quickly drove to a movie theatre in Lower Hutt, a suburb of Wellington.  The huge theatre impressed me as much as any theatre in any big city.  The food options included the familiar, but had a few Kiwi additions.  Our tickets were to particular seats which were very comfortable.  We watched "World War Z" which we all enjoyed. 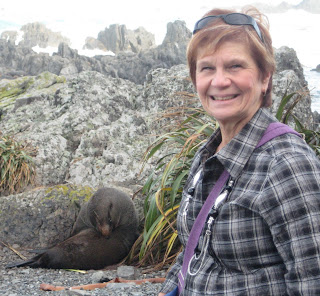 The goal the next morning was to see live fur seals in the wild.  We opted to walk for about an hour along the coast of Cook Strait at the Te Kopahou reserve only minutes from our hotel. When we arrived there were dozens of fur seals very unconcerned about our presence letting us get to within 10 meters.  It is one thing to see friendly domestic animals, but it still feels different to get close to wild animals.  Part of the satisfaction was the effort to reach them.

Researching for the trip I learned about an art project in a small park and was pleased to learn it was within easy walking distance.  Te Aro Park is  a small triangle intersection with a fountain and some bits of tile and sculpture.  Also not far was some other bits of sculpture including the Bucket which splashes water on a continuous basis right on Cuba Street. 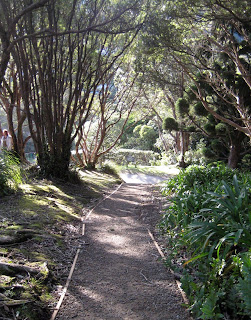 Shown on all the Wellington tourist brochures is their cable car.  It starts in a commercial mall and goes up a steep hill with three stops.  We got out at the Wellington Botanic Gardens.  I was very impressed with the trees, but wished I could have viewed more flowers in their summer season. 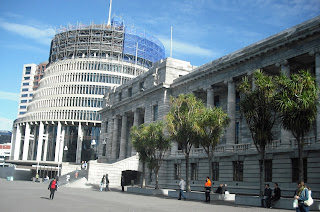 One fact that makes Wellington so important is that the national government is there.  We got inside for a tour, but ran out of time.  Aside from government departments, they have set up three buildings side by side that represent the legislature, the executive and the national library. The building where the elected officials have offices  is very unique and is labeled the Beehive.  While there I ventured into their gift shop and ended up buying a political satire book., "Don't Vote-It only encourages them!"


Napier was a town that had been flattened by an earthquake in 1931.  They rebuilt it in a style fashionable at the time, Art Deco.  It is prevalent downtown and in some residential areas. 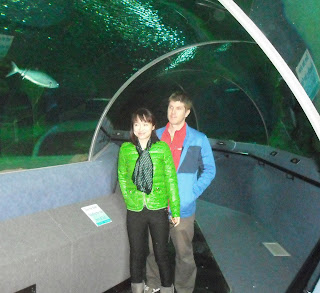 Napier is also home to the National Aquarium.  The building is designed to appear as a stingray from the outside.  Inside it is much bigger than it appears.  All sorts of interesting sea creatures are in glass (or plexiglass) containers.  One room is an immense tank where visitors walk through a tunnel and view a wide variety of fish, including sharks.  Since coming to New Zealand I have been on a quest to see their national bird the Kiwi.  Everywhere there is a ban on flash photography as the kiwi is a nocturnal animal. Here we at least got to see a live kiwi and in a night atmosphere they are lively.

From there we drove to Taupo which is on the largest lake in New Zealand.  We played  mini golf and watched a few golfers try an unusual hole in one contest.  They drove the ball from land, but tried to hit a hole on a floating deck several feet away.  The owner said he got a hole in one every few weeks. 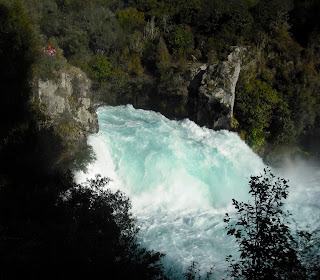 The next morning we drove towards Rotorua first visiting Huka Falls.  There is only about a nine meter drop, but the water is very fast.  One sign noted that because of the hard flow no eels are found in Lake Taupo.

Nearby was the Huka Honey Hive.  Honey is an important export for New Zealand and we had been told while in Canada that it is some of the best in the world.  There were a lot of temptations--I gave into an urge to buy honey flavoured ice cream in a cone which was delicious.  I was tempted to buy pickles that were marinated in honey and rum, but was told it would be too difficult to take home.  We did taste a variety of honey samples and ended up buying a few small jars.  A woman in charge of tasting has a son in London, England and had many interesting things to say.  Realizing she was trying to persuade us to take on some heavy items to our luggage she pointed out that many travelers wear old underwear and then discard for trip back home.  She was successful in selling us some very tempting honey products. 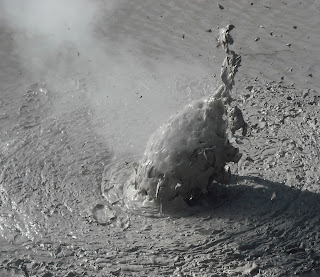 Rotorua is a major tourist destination, with a lot of Maori and natural attractions.  We visited one location to watch bubbling mud and another to visit steam vents.  Might sound boring from a distance, but it is always amazing to see the power of nature. 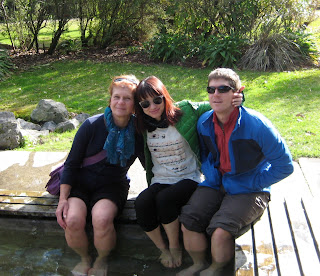 Our last visit was to soak our feet in some water pumped in from these natural resources.  We had done a lot of walking up and down big hills, monuments and along seashores.  It felt good. Bear in mind this is the middle of New Zealand's winter.

After getting back to Auckland we learned of a Wellington minor earthquake about three days after we left.

I will add a few impressions of New Zealand and make some comparisons with my native Canada at http://www.therealjohndavidson.com/2013/07/new-zealand-odds-ends.html.  A vacation should be more than just visiting tourist attractions.  You can read New Zealand Part 1 which focuses on Auckland at http://www.therealjohndavidson.com/2013/07/new-zealand-part-1.html
Posted by John F Davidson at 4:49 PM