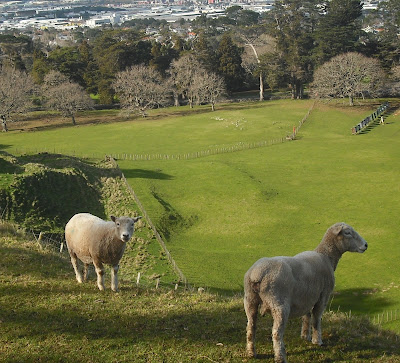 Settling back in Canada to my regular routine it is time to reflect on our recent New Zealand trip.

In Canada we live in the middle of 5 1/2 time zones and seldom have to worry much about them except perhaps watching sporting events or a national election.  With New Zealand we were dealing with 16 hours difference which has an effect on all your natural body functions.  To confuse the issue more they are ahead of North America as the dateline is just to the east of New Zealand.  We realized our sleeping patterns left only a few hours of conscious overlapping time with those we left behind in Canada.

From North America you will be confused by the left-hand side driving.  Even as a pedestrian you have to be alert to look in the right direction to avoid being hit.  Often as a passenger I cringed as turns and lane changes seemed to go against my natural instincts.  This extends to walking where we saw signs that told you to bear left instead of right.  Most of us walking the streets ignore this rule, but when you come head on to another walker the New Zealander tends to go to the left.  They say you will get used to it.

One thing quickly noted is prices.  Most things appear to cost a little more than we are used to.  Like Canada and the United States they use a dollar based economy, but at the moment both North American dollar currencies are worth more so as visitors you have a 10-20% discount already.  Unlike in Canada all taxes are built into the price.  In restaurants tips are not expected and on credit card transactions tips are not usually even an option.  New Zealand does have to import many of their goods, but they have been clever in developing ways of earning their way in the world.

Most of their energy is imported and this is reflected in higher gas prices.  New Zealand seems more conscious of environmental concerns than do North Americans.  It took me awhile to catch on that when flushing a toilet you have two choices;  lesser amount of water or for a bigger job a greater amount of water.  Another energy saver was encountered in parking garages amongst other facilities where sensor lights went on as you approached and went off as you left. 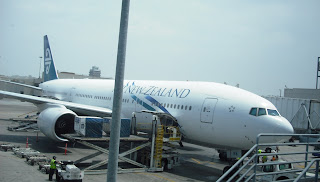 Getting to New Zealand from central Canada is arduous, but Air New Zealand makes it easier. With a twelve hour+ flight (from Los Angeles) you anticipate a lot of discomfort.  They go to a lot of effort to minimize that.  The first thing we saw as we approached our economy seats was a pillow, blanket and head phones.  A touch screen had far more movie and music options than I ever encountered on a airplane.  Before leaving you can actually preview the choices on their webpage.  They take a lot of attention to food, giving you two main interesting choices at each meal.  A major part of the food is grown in New Zealand..  They also pay attention to wine selections.  You are given choices of reds or whites (or other beverages).  Towards the end of your meal they may offer to top up your wine. New Zealand wine is among our favorites.  Snacks are available on demand.  I watched two movies on each trip and listened to some music taking some time to rest.

Our taste adventure continued after we landed. 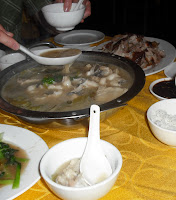 We enjoyed a wide variety of meals.  There are a lot of Asians in New Zealand and a lot of them opened up restaurants.  I used chopsticks for at least four meals, but have a long way to go in that regard.

One of our first meals was at Beijing Duck in Panmure, a part of Auckland.  I had never understood what was so special before about what used to be called Peking Duck.  The actual duck had to be ordered a few hours in advance.  Properly prepared it is an experience--sliced and put in very thin rice wraps with other Chinese condiments it is wonderful.  I also used chopsticks in a Chinese noodle restaurant in the same area and discovered a sauce I plan to seek out (but only have the Chinese labeling to help me).  A Japanese restaurant required chopsticks and I recall using them at a Malaysian restaurant in Wellington where I also tried a type of milk tea that was delicious. 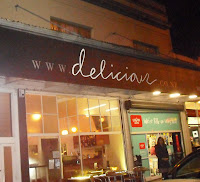 We enjoyed Indian and Turkish food, both of which are very common throughout New Zealand.  Along ethnic lines we also had some Mexican food that was as good as back home.

On my wife Sharon's birthday I had discovered an Italian restaurant, Delicious that offered a rare delicacy, gnocchi with gorgonzola which I enjoyed with a glass of wine.

Driving between cities we gave into our hunger cravings in the small town of Shannon.  In a restaurant that was basically Chinese we had fish n chips.  In some ways it was the best value of the whole trip so I will mention the name, Sun Ming's Takeaways in the town of Shannon.  I ate Terakihi fish which I could only spell after reading about it in "The Bone People," a famous New Zealand novel. 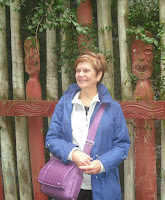 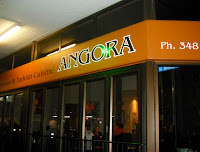 Back home we occasionally enjoyed eating British style meat pies from a favorite vendor at the Hamilton Farmers' Market, but New Zealand takes meat pies (which they simply call "pies") to a new level.  They were bigger, meatier and sometimes spicier. My favorite was Kristy's Cafe in Wanganui where I had heard of their Raetihi pies.  They lived up to their billing and one of the waitresses  earned my respect by customizing an order for Laura, my son Michael's girlfriend.

Another New Zealand product is lamb.  Normally I would eat lamb two or three times a year maximum, however well aware that it is a specialty here I ate several variations of it.  I will admit that the best version was a home dinner cooked by Laura.   I also had lamb as a garnish on bruschetta, as a meat pie and burger filler and the meat choice for a few of my Asian entrees (New Zealanders call them "mains").  I expect to eat lamb more often.  Sheep are everywhere in New Zealand outside the cities.

Another researched item was prawns which are harvested in Lake Taupo amongst other places.  I had a few versions of prawns with Mexican and Asian mains.

There were times when it was more convenient to hit a global chain and we did three or four times.  The service was more than adequate, but I wanted to add in that the McDonald's McCafe in Taupo  made us feel important with their service. 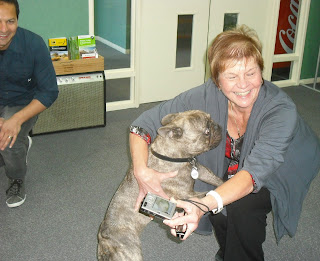 Traveling in the off season (their winter) made some things a little easier and affordable.  The most luxurious hotel was the Comfort Hotel on Cuba Street in Wellington where we stayed three nights.  The staff was also very good helping us find our way around.  The most interesting was Parkside Lodge in Napier where the owner, Sateesh was especially helpful and set a unique decor.  He had an old fashion record player and rotated a variety of music.  They had kitchen facilities shared with other guests (and supplied with herbs and baked goodies from his wife).  Their dog Chutney was entertaining.  We also stayed at two Backpacker lodges which are affordable, if somewhat basic.  The managers were also helpful in directing us to where we wanted to go. 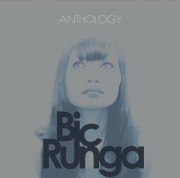 Music is important to me as a cultural link.  I had already liked opera singer Kiri Te Kanawa and Maori music.  In my research I learned of a number of more contemporary musicians and have decided that Bic Runga needs to be added to my library. A CD was purchased and I have been listening to it back home and love it.  Each time I listen to it memories of New Zealand will be stirred.

While doing all the things related in the three blog posts I also managed to squeeze in close to my normal reading.  Even though I was half way around the world I was able to return two books and borrow another from the Hamilton Public Library (the one in Ontario).  E books are wonderful.


In my first blog on New Zealand I commented on some of the reasons that Auckland is often considered one of the five best cities in the world to live in.  Mostly just commented on the weather and the scenery.  I had read "Fairness and Freedom" that contrasted American focus on freedom with the New Zealand focus on fairness and although there needs to be a balance between the two concepts many people would find the New Zealand emphasis is more comfortable to live with.  You can read my blog on that at http://www.therealjohndavidson.com/2012/06/fairness-and-freedom-book-review.html.  I would also mention that unlike in Canada or United States they have a form of proportional voting which to me means each of their votes really counts which I feel is reflected in their lifestyle.

A fair amount of our time was devoted to taking photos which are my favorite souvenirs.  Sometimes one can get so intense about getting another photo or another angle that you fail to enjoy the unique moment.  We also visited several locations looking for the perfect souvenirs.  Souvenirs are a serious business for many, yet in some ways seem trivial.  We are really looking for memories which is the English translation of souvenirs.

When much younger I had the idea that I had to see everything there was to see, but as I aged I realized that is not possible.  Going to a Cuban beach the last few years I did more pure relaxation, but was still itching to see something I hadn't seen before.  There are a lot of interesting, even exciting things to see in this world, but you will enjoy life more if you can accept that life has brought you wherever you are and the best thing you can do is to enjoy that moment.

You can read New Zealand Part 1 at http://www.therealjohndavidson.com/2013/07/new-zealand-part-1.htmlwhich is focussed on Auckland.  New Zealand Part 2 recounts a 1600 kilometre motor trip around the North Island including the Waitomo Caves http://www.therealjohndavidson.com/2013/07/new-zealand-part-2.html
Posted by John F Davidson at 7:03 AM