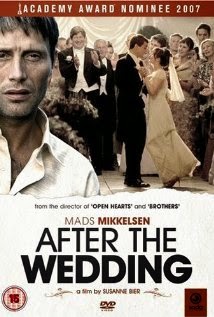 My first awareness of Mads was with "After The Wedding" which is still one of my very favorite movies.  He plays an idealist working in India at an orphanage coming back to Denmark to negotiate with a Danish philanthropist, but After the Wedding his life changes.  It really is a wonderful movie which I don't want to spoil.  Directed by Susanne Bier it had been nominated for best foreign film Oscar.

"Flame and Citron" released in 2008 about the Danish resistance in WWII with lots of uncertainty.  Won a few awards and nominated for others.

Pusher II shocked me--I was used to a likable, thoughtful man, but his role here is selfish, short sighted and definitely not likable.  A truly good actor disrupts your preconceptions.

"Adam's Apples" is a sort of black comedy  Mads played a minister who always saw good even in grotesque bad things.  He was incredibly naive and lots of people took advantage of him.

Being a James Bond villain is a badge of honour.   He played Le Chifre in "Casino Royale" as sinister and cruel as one could hope for.

"A Royal Affair" was nominated for an Oscar.  Again Mads plays a sympathetic, even noble  character.  this time he is a physician brought to the Danish court. At one point he suggests a smallpox vaccine.  I checked this in Wikipedia and it turns out to be true.

"The Hunt" nominated for Oscar is a wonderful movie depicting people at their worst.  Based on a young girl's claim which she later recanted people assumed the worst.  The ending was a bit brutal, but the alternative ending was even more brutal.

I enjoy his films in English or Danish, but he has led me to other Danish films that I have found enjoyable. Susanne Bier directed movies not only in Denmark winning another Oscar best foreign film for  "In a Better World" and another,  "Brothers" later remade in Hollywood.  Susanne herself has directed Hollywood movies.

Now that he is getting really good reviews on the popular "Hannibal" tv series as Dr Hannibal Lector he will get more respect.
Posted by John F Davidson at 2:35 PM