Anupam Kher an actor I have learned to respect. 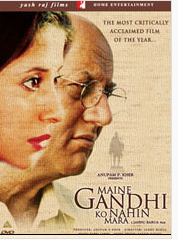 Anupam Kher epitomizes for me the worst and the best of Bollywood.   I am of two minds on Anupam.  In some films I have been embarrassed thinking his acting reminded me too much of Jerry Lewis at his worst.  I had seen enough of Bollywood to find lots of things to like, but could also see why my North American acquaintances tend to cringe when they think of it.  As an excuse, I can appreciate that to get ahead in a career you do whatever is required--Steve Martin was pretty wild when he hit my attention, but has proved to be pretty good at serious drama, enjoyable comedy and has done some serious writing.  Bollywood has always tried to cater to families (from Grandmother to the kids) and comic relief is important.

On the other hand Anupam has demonstrated his versatility.  We movie goers tend to judge the actors by what we see on the screen.  He has managed to take part in a lot of critically acclaimed films as well as some very popular ones.  Obviously he fits in well with film crews and has proven to be very flexible.  He has worked with a lot of well known directors, producers and other actors in at least five countries.  He is popular as a father figure, but that description covers in his case a wide range of styles.

Over 350 films.  Not usually a leading character, but he still must have juggled a lot to fit it all in  He is busier than ever and seems to like it.  He has also acted as an ambassador for Bollywood and been involved with acting schools.

Anupam started making films in 1982.  His first English speaking movie in 1984 was "Kim" starring Peter O'Toole, but Anupam was uncredited.

In "Darr," a scary movie he played comic relief excessively--but perhaps this movie really required comic relief.  In any case he won best supporting actor in a comic role from Filmfare.

Playing the father role in a very professional manner is more normal.  In "Wake up Sid" as father to Ranbir Kapoor he played a tough, but loving father in an excellent coming of age movie.  In "Vivah" he played a father encouraging his son, Shahid Kapoor to get married and was supportive of the prospective bride's family (in some ways from a relatively lower class). In "Dil Bole Hadippa" he was a cricket loving father again to Shahid.  In "Badma$h Company" again played father to Shahid , but as a tough ethical business man disappointed in his son.  In "Pyar Impossible" wearing a wig he played an empathetic father to producer director Uday Chopra in a movie not highly rated, but enjoyable to watch.

In "A Wednesday" he played the Mumbai city police commissioner threatened by bombs from Nasseruddin Shah. A lot of tension in this movie which won a number of awards.

In "Breakaway" Anupam came to Toronto and played the father to Vinay Virmani who wrote the script.  Hockey was the key ingredient linking Sikhs and Canada's national game.  Russell Peters gave it some more Canadian flavour.  Anupam had played a cricket playing father in "Bend it Like Beckham."

In "Silver Lining Playbook" he played a psychiatrist and with the rest of the cast had been nominated for awards as part of an ensemble cast.

In "Veer-Zaara," he played a tough ruthless Pakistani lawyer,  In "Paheli," another favorite movie he was a greedy merchant.  "Rang De Basanti" was another classic movie starring Aamir Khan.

"Lust-Caution!" by Ang Lee (one of the hard to forget movies) set in China with mostly Chinese dialect during World War II.  He played a shady character

"Special 26" can compare itself to "Oceans Eleven" favorably.  Akshay Kumar led the cast, but Anupam played a very clever con man with a large brood of children.  He was excellent.

"Maine Gandhi ko Nahin Mara" pictured at the top with Urmila Matondkar was the movie that inspired this blog post.  Anupam was a producer and really gave a top notch performance in the difficult role of a man with Alzheimer's.  He paid his dues and will be remembered for this role and dozens of others.  He added value to a number of worthy movies.  When I now see his name I know there must be something good to look forward to.

Mar 1/11 Enjoyed  watching him in "New Amsterdam" disappointed to see him leave, but understand.  Look forward to future endeavours.