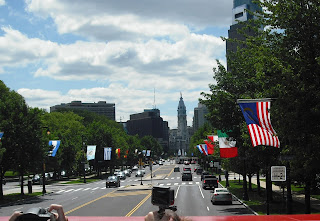 Most of the world seems to like the new agreement with Iran and six other nations, but others are threatening to block it anyway they can with one presidential candidate threatening to bomb Iran on his first day in office.  Many Americans feel they are "exceptional" and ought to be able to get their way no matter what.  It is actually not healthy when one side can bully everyone else.  Fear creates communication problems and ignorance begets poor choices.

At least four years in the making many politicians have denounced it before reading any details.  Obviously to them politics and appealing to a political base is more critical than serious study.

Obama explained the situation much better than I can so I may borrow a few of his thoughts.  Each side had some leverage and each is looking for ways to increase that power.  If you don't have anything the other person wants it creates an awkward situation.  The British started what became known as the Opium Wars essentially because the Chinese didn't want very much of what the English had to offer in exchange for tea which the British took a fancy to and so they did their best to create opium addictions.

The Iranians want to be able to sell more goods to the world and the West wants to stop the spread of nuclear weapons (particularly to unfriendly parties).  There are a lot of side issues such as prisoners being held hostage, conventional weapons being sent to terrorists, Sunni terrorists in Iraq and Syria, human rights violations.  One option is to use force, but that can be very expensive, not only in terms of money, but in lives and credibility.  Force in the Middle East often just reinforces their perception of being hated and the need to fight back.

As Obama pointed out they were able to put a coalition together that added more pressure to Iran, but each coalition member (United Kingdom, France, Russia, China and Germany) have their own particular concerns.  They negotiated an agreement they felt comfortable with, but won't be pleased if the United States wants to renege.  Each member of congress has to recognize they are not just objecting to Obama, but also to the other coalition partners who helped force Iran to this agreement.  Congress also needs to realize that the coalition members may not wish to carry on sanctions and therefore Iran may well feel less pressure to give up further power.

The issue of trust is often brought up as if the Iranians were the only ones with a bad reputation.  It was the American CIA that arranged for a democratically elected Iranian leader to be deposed and replaced with a monarch way back in 1953 and then went on to help set up a secret service that controlled ordinary Iranians.  Iraq was encouraged to invade Iran.  Later  Ronald Reagan authorized a contra deal involving weapons with the Iranians.  Earlier after World War I European powers, mainly England and France split up the Middle East for their own greedy reasons.

Americans are upset that Hamas and Hezbollah are financed in part by Iran.  Iranians, at all levels do not see them as terrorists, but as freedom fighters.  There is a great deal of resentment in the Muslim world that Israelis financed by Americans are subjugating Palestinians.  There are a lot of facts and opinions to back that up.  It is fair to say Iranians do not share American sentiments on the issue.

There is a very delicate balance between keeping Israel, Saudi Arabia and other Middle Eastern countries satisfied.  The agreement will not please everyone in that area, but a revocation by one party will only exacerbate the situation.

Israel fears their Arab and Persian neighbours, but does work with some of them and is concerned that any new regimes (such as after the Arab Spring) might be more difficult.  Saudi Arabia seems to be the biggest source of terrorists and have Shiites wanting to be treated equally.  The people of almost all Muslim countries are sympathetic to the Palestinians and distrust those they feel abuse them.

The American negotiating team has been accused of naivety, but in fact Obama clearly understands there is a possibility the other side will not honour the agreement.  Punishments are laid for any violation and reasonable verification is in place.  Violations affect credibility.

Alternatives?? All seem to revolve around being tougher, more threatening.  There are a lot of complaints about Iran (and they have a few about us), but the underlying idea of these negotiations was to stop the spread of nuclear weapons and avoiding an escalation by other countries.

With the release of Iranian oil, the price at the pump is expected to go down.  This will have consequences.  Low cost oil will curtail expensive sources such as  Tar Sands and fracking.  Non oil countries will benefit with lower costs of living.  Climate change strategies may be delayed again, although green forces are gaining strength.  Arab countries and other oil producers will lose revenue.

Possibly the ISIL problem will be dealt with more effectively.  How will the Kurds fare as they contribute to the solution?

Israel and Sunnis and Shiites and Christians need to get along better--what plans do any of them have to facilitate that?

Photo is of the flags along the Benjamin Franklin Parkway in Philadelphia.
Posted by John F Davidson at 3:33 PM