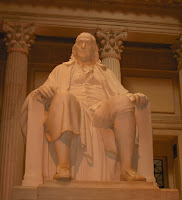 Some of you may know my son, Michael lives in New Zealand so when he told us he was coming to Canada to visit we were excited.  At an education and technology conference in New Zealand he learned of a bigger one to be held in Philadelphia while he was in North America.  His school agreed to pay part of the cost.  He invited us to join him and share driving and expenses.  Never been to Philadelphia, but this seemed like a good opportunity to expand my horizons.

Because of other commitments and the last minute addition of the convention there was not a lot of time for sightseeing, especially the kind where you are well rested.  It amounted to an 8 hour trip both ways with the last one overnight.  Still planning ahead you can see a lot of interesting things and learn about how another part of the world lives.

Philadelphia to some degree seems to live under the shadow of New York City, but in fact it has a lot going for it.  We found plenty of positives in comparison.

A pleasant surprise as we were too tired to walk far and too scared to drive so we took almost the first restaurant we saw, Penrose Diner across from our hotel.  We took one of the specials and got more than we expected--a glass of wine, dessert, very nice bread and the main course was delicious. Good service.

The next day we opted to go on a sight seeing bus tour to give an overview of the city.  We took advantage of the hop on-hop off feature and had three different tour guides.  Philadelphia was founded by Quakers who thought nature was a good vehicle to communicate with God and planned for lots of park space assuring that most citizens were within a mile of a park.  New York's Central Park had made a strong impression on me, but I learned that Fairmount Park is much bigger.  We saw lots of smaller parks wherever we traveled.  I had always thought that Monopoly was based on Atlantic City, but really it was only the streets, the businesses were all borrowed from Philadelphia.  Row houses, but mostly very individualized were very common and were the result of early taxing policies.

We just passed by the Rodin Museum which apparently is one of the biggest outside of Paris.  I had seen an exhibition in Victoria, B.C. and missed one in my home town, Hamilton.  Did take one photo from outside on top of the bus.

The Skyline is not quite as overwhelming as New York, but is still very impressive not only in the heights, but in the unique architecture, both new and historical.  They also put a premium on statues and fountains.  One guide told us that juvenile offenders were often given a choice of detention or working on murals and many opted for the paint work. 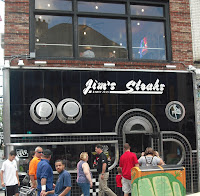 One tour guide confirmed a Canadian visitor by recommending Jim's Steak House as the best Philly Cheese Steak.  Reading about this tradition I was initially turned off by the inclusion of Cheese Whiz, but decided to try it anyway.  It does add flavor and texture.  Jim's Steak House is quite an operation with a long hot plate with various ingredients in various stages and with specialists, was able to respond to a wide range of individual options.  Very definitely a worthy tradition that visitors should at least try. 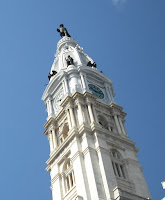 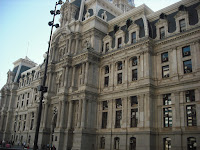 Our subway terminal was at the City Hall.  It is massive and I understand is one of the largest in the world of its type.  I could not fit it all in with my puny camera. 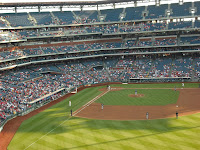 At night we had tickets for a Phillies baseball game. Philadelphia has quite the sports complex which we were able to walk to.  At the southern end of Broad street they have 3 modern sports facilities.  One just for baseball, one designed for football and an arena for basketball, hockey and lacrosse. The baseball facility was pretty cool, but not covered--the screen entertainment was engrossing (as most of it was the audience itself).  The game started off good for the home team, but didn't end that way.  Had my second Philly Cheese Steak and could see it was a very popular item among what I assumed were locals. 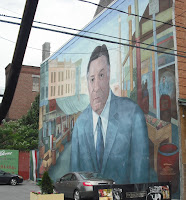 The next and last day for us was a lot of walking.  We used the subway system to get near the downtown and first checked out the Italian market.  Not entirely Italian (Mexican and Asian influences were noticeable).  Italians still dominate and we picked up a gift for Peter that hit a positive nerve.  I read a brochure about a gelato sandwich and decided that was not for me, but at Anthony's Italian Coffee House I decided to try one--good choice.

We walked up to the Independence Park area and quickly realized the Liberty Bell lineup was several hours long so I contented myself with a photo through a window (which I will not be displaying in this post).  Benjamin Franklin is one of my all time heroes and I visited a museum devoted to him.  I thought I knew a lot about him, but there was more to learn.  He was a problem solver which resulted in a wide variety of inventions (for which he did not seek patents) and developed fire fighting services, library and the postal service.  As a printer he wrote a lot of his own material and earned a lot of respect for his wisdom.  Later in life he performed critical tasks for the new American government.  I bought his autobiography from the gift shop. Among many other things the city designed a new street, the Benjamin Franklin Parkway modeled on the Champs d'Elysee with the flags of the world. 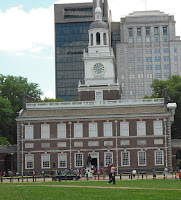 It seemed to me that Philadelphia received the short end of the stick and at first I blamed New York.  The Declaration of Independence and the American Constitution were both written here.  They had many important financial institutes and significant merchants, but I figured there must have been some jealousy from New York.  George Washington served his presidency from New York City in his first term, but before his second term, the capital had been moved to Philadelphia where it remained for ten years.  The problem seems to stem from southern resentment that the capital was in the rich north and they felt they would not get justice (remember slavery was one of their concerns) so they forced a compromise resulting in the founding of Washington, D.C. with Philadelphia declining in political influence.

We arrived at the Reading Terminal Market at about 2:30 on a Tuesday afternoon and we were stunned with how busy it was.  Our main comparison would be with the St Lawrence Market, the Hamilton Farmer's Market and  the Jean Talon Market in Montreal, all of which are worthy of a visit, but Philadelphia attracts a lot of tourists and also local people who like the market uniqueness.  Part of it comes from the Pennsylvania Dutch.  I learned a few years back that some of my ancestors came from Lancaster, Pennsylvania and took an interest in some of their food  I bought a jar of pumpkin butter (like apple butter, only sweeter) and Shoo fly pie.  We would have liked to buy from some of the eating places, but there were very long lineups for them, but not enough seating for the demand.  Read how I learned of my Mennonite heritage at  http://www.therealjohndavidson.com/2012/07/biggest-surprise-in-my-family-tree.html

A short walk away we discovered Maggiano's.  In the background was music by Frank Sinatra and Tony Bennett with a very Italian ambience.  My wife was attracted by an item on the menu eggplant parmagiana and it lived up to its reputation.  The food was excellent including the house salad.  My wife commented that they had the best washrooms on our trip.

We enjoyed our visit, but as we had to be back in Canada so our son could attend a Canada Day Blue Jays' game with our daughter and that meant an overnight drive.  We wish we had more time--it is a beautiful city with lots of interesting facets. 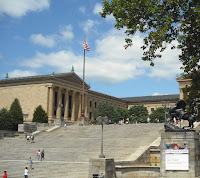 While researching for my trip I watched some movies set in Philadelphia.   An apology to Thom Ernest.who had commented on a sad section of the movie, "Rocky" whereas I reacted by saying it was a happy movie.  Overall it is, but the one scene he referred to with Burgess Meredith hit me a little harder.   I added the Rocky theme to my iTunesMusic- to help motivate me.  Yes we did visit the Rocky Steps.  A few other movies were interesting--saw a key house from "Sixth Sense" on the bus tour.

A tiring three days, but everyone got something out of it.

top:  Benjamin Franklin, my hero, taken at Franklin Institute after camera battery had run down a bit

Side by Side photos of Philadelphia City Hall--too much for my camera so separate for bottom and the top with William Penn statue.

Citizen's Bank Park where we watched the Phillies lose to Milwaukee

Rocky Steps
Posted by John F Davidson at 9:55 AM