FACE TO FACE HILLARY VS THE DONALD 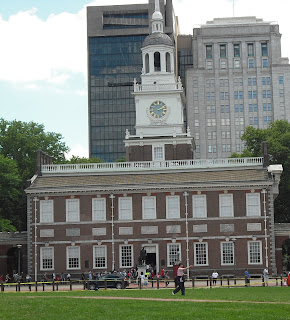 So many people are commenting on the big debate--first time face to face in front of millions.  Some of my observations are really second hand as with so many eyeballs and ears focused there are bound to be different perspective and interpretations.

The election has mostly been reported as a horse race.  How each candidate is doing with various voter niches.  The consequences are monumental, but the focus is on relatively inconsequential items.

During the primaries Hillary found herself modifying some of her positions such as on the TPP and post secondary education.  Trump really created attention by a steady stream of insults and few policy statements.  Hillary has had to endure petty mistatements while most of Trump's outrageous claims slid over his base support.  There are many people who have not fared well in the last few years looking for someone to blame.  Trump can name the disaster providers and present simple solutions.

Who won the debate?  Many would say Hillary Clinton, but others felt Trump did pretty good--after all he made a lot of points that some people agree with.  One of the problems was that many of his statements were fabrications and/or misleading.

There are too many examples of Trump's misstatements and missteps, but people do need reminding.

To make his points he made over 25 interruptions including against the moderator, Lester Holt plus talking over Hillary who acted flabbergasted at many of his claims.  Trump tends to talk in hyperbolic generalizations and not worry too much if he has already been disproved.  He also prefers changing the topic to answering the question at hand.  Lester did call Trump on some of his mis-statements, but generally let him run freely which was just as well.

Trump criticized Clinton for not being on the road the past week like he was.  She said she was getting prepared for the debate.  To me it signalled a better sense of priorities.   Later he bragged about his superior temperament (which drew laughter) while he commented he didn't feel he had to be prepared.  Stamina was really counter productive (again).   He said earlier he didn't think she looked "presidential," but really laid into the idea that she didn't have the necessary stamina.  She pointed out after he traveled as much as she had or endured 11 hours in a Congressional enquiry he could talk about "stamina."

At one point defending his non disclosure of his income taxes he ended up bragging about being smart to not pay income tax.  He also boasted he was a good business man anticipating a downside to business as a housing crisis approached.  His bankruptcies and stiffing contractual employees were signs of his smart business.

Racism became a topic to which Hillary made a few suggestions, but Trump completely misread the opportunity.  Instead of trying to reconcile with blacks his first point was we need "law and order."  Discussing the birther controversy he twisted it so it was good that he forced Barack Obama to produce his birth certificate.  Most blacks realize this was meant to discredit and humiliate the first black President.

Climate change poked into the debate a little.  He denied what he had said and misled about the solar panel efforts.  This is an area where the public is starting to get ahead of the right wing.  The right wing seems beholden to oil and coal interests.  This topic needs more time in future debates.

At one point he questioned NATO partners (plus Japan and South Korea) not paying their fair share.  Hillary was quick to reassure that she would honour American commitments.  Trump repeated an earlier suggestion we should have stolen oil from the Iraquis to prevent ISIS.  He criticized the Iranian deal and brought up money paid to Iran, neglecting to mention that it was returning money that had been frozen.  He seemed much readier to find a military solution than a diplomatic one.

At another time he ranted about regulations, but neglected to mention that a lack of enforced regulations was a major factor in the Great Recession of 2008 and of debilitating pollution.  This is another area that needs to be discussed.  Regulations can be abused and hamper business, but they can also facilitate smoother, fairer business.

Trump has supporters who actually believe what he says (and implies).  To many of them the biggest disappointments were the things he didn't say.  Off the stage he apparently implied he could have said some more pointed comments, but he was too decent to say them.  He really wasn't gallant at all--but perhaps was restrained by good advice not to be too provocative or too touchy.

The election looks better for Hillary, but unfortunately she might end up dealing with a very resistant Congress.  The right wing money behind the Republicans has already to a large extent been diverted to Senate and House of Representatives contests.  Most Congress members are distancing themselves as much as practical from Donald, but would continue to be obstructive to a progressive agenda
.
Posted by John F Davidson at 12:45 PM