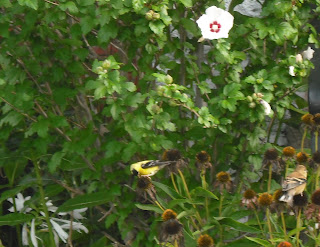 Guilty as charged.  I am not better than the mobs of ignorant people wanting to get something for nothing.  Television became available to me when I was in the elementary grades.  Of course my parents paid for everything at that stage, but I couldn't see how my family paid for what could be seen on television.

As a newspaper carrier from about age 10 I knew people paid for the newspaper because I collected the money.  Many years later as a circulation manager I learned that the subscription payments were not as crucial as advertising revenues. Later in my newspaper career I worked for free distribution papers which went for the advertising dollar.  For my newspaper career you can start a 3 part blog at:  http://www.therealjohndavidson.com/2012/08/my-career-in-newspaper-circulation-part.html

Advertising is also information, but unless we are looking for something (or something catches our eye) we find it annoying.  Still the marriage between information being a platform with those trying to sell a product or service has a long history.  If an advertiser can't lure enough consumers to buy their products they will go out of business.  They realize that most of the readers (or viewers or listeners) are not ready to buy whatever they are selling, but hope that in the myriad of those exposed to the ad are enough buyers.  Those of us who seek money are part of this struggle.  No buyers, no jobs.

"Page One:  Inside the New York Times" a DVD helped me regurgitate my thinking on this topic.  The New York Times has watched smaller papers go out of business.  Like many they have wrestled with the notion of charging for online content.  So far I have mostly kept under their limit although a few times I suffered near the end of the month.

A big part of my respect for the New York Times comes from television.  A number of New York Times columnists, notably Paul Krugman and reporters have appeared on talk shows and usually make the most sense.   I read a lot of criticism and can see some validity to it, but somehow they attract talent.

You Tube puts ads on many of their videos.  I believe these video ads are tailored to what they know about you.  And that comes from everything else you do on the inter-net.  More recently watched "Citizenfour"  about Edward Snowden where it was pointed out each keystroke is recorded somewhere and can be analyzed.  Google and Facebook have a pretty good idea of your preferences and attempt to meet them with their paid advertisers.  Sometimes it works, but other times you wonder where they ever got the idea you would be interested in something so off the wall.

"The Shallows" by Nicholas Carr was an diagnosis of a common trend.  With so much information I find myself skimming through a variety of online information..  The real talent is to be able to skim and get the important facts understood.  I used to literally spend hours each day reading newspapers which helped motivated me to work for a newspaper.  Now I spend hours each day on the internet picking up all sorts of tidbits, some of which are useful.  Some is thought provoking.  Some of it is numbing.

Whoever controls information has power.  Right now there is  lot of competition and I would say the bad guys are more than holding their own.  By that I mean the information is often very distorted and some news is hard to find.  Still corporate powers are trying to restrict access to the internet.

A good part of my life has been selling advertisements, so it is concerning when I am told that my prospect can get "free" advertising on the net.  It would be foolish to ignore these opportunities, but there are consequences.  Newspapers have used advertising revenue to provide news coverage.  Investigative reporting takes time, talent and money.  There are Ads only newspapers and channels which serve a purpose, but lacking editorial support.

I am used to getting free information.  Of course it is not really free.  Sometimes it is just an opinion or a slanted perspective on news.  We all love to be in the know.  What do you think of all this "free" information?
Posted by John F Davidson at 1:23 PM