"A Man Called Ove" a Great movie from Sweden 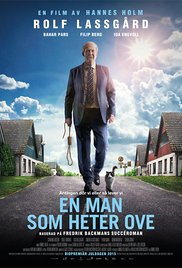 We all start judging people as soon as we are conscious of them.   It is hard to overcome our initial pre judgment, but everyone is deeper than their appearance.  Movies often dramatize how we are often wrong about our judgment.  "A Man called Ove" from Sweden is a good example that some would call formulaic, but here it is well done and a reminder we are all fallible

Ove is at first sight hard to like.  He is a grumpy even belligerent nit picker.  Much of it is comic.  At the very beginning you see him deliver flowers to his wife's grave and talk to her giving him a touch of humanity.  He is disgusted with much of the world and wants to join his wife, but his suicide attempts are interrupted

His background is told in flashbacks.  You can see many of his dislikable characteristics, but he is humanized and you might guess a woman is behind it.  The formula works with Sonja a perky and more sophisticated young woman overcomes his awkwardness.  She sees something in him after a chance meeting, perhaps his honesty (even though he lies to make an impression) and earnestness.

One example of his pettiness is his preference for Saab cars and judging other people's character by what cars they buy.  A close friend drove a Volvo and later a BMW and this really tested their friendship.  My father thought Saab was the best car he had ever driven and had been asked to join their rally team.

Back to the present; an Iranian immigrant woman, Parvanah meets him when her Swedish husband's car backs into Ove's mailbox  She annoys him at first, but she is persistently positive and gifts a Persian treat which he ignores until he eats it out of desperation and likes it.  Her two children make him cringe at first, but over the course of the movie he becomes attached.  This also segways to why he doesn't have children.  Later in the movie when Ove and  Parvanah have formed a friendly relationship as he is teaching her to drive, he calls her husband a loser.  She is a very boisterous and pivotal character..

The ending is not unexpected with everybody appreciating Ove a bit more, although they are not privy to all the flashback information.  It feels so good  I felt compelled to recommend the whole movie as you can't appreciate the ending unless you have seen what led up to it.  A grumpy man has been mellowed with young children loving him.

A first time novel from Fredrik Backman inspired the film.  He is a blogger, a magazine writer and now a novelist with a few best sellers under his belt that have been translated into 25 languages.

Hannes Holm directed and wrote the script.  He started directing in 1987 and writing scripts in 1995.  He acted in films starting in 1981.

Rolf  Lassgard appeared in my favourite movie "After the Wedding," a Danish Oscar nominated movie.   He played a benevolent manipulator and won at least one award for it.  He is also known for playing Kurt Wallander.  He played Ove with a lot of bluster, but also subtlety.

Bahar Pars was born in Iran but came to Sweden in 1989 after the Iranian-Iraq war.  Her acting career is all in Sweden.  She played the title characters in both "Anna Karenina" and "Hedda Gabler" on stage.  She also directed two short films; the second after this film she also wrote and produced.  It concerns a black woman asked to do a voice over for an advertisement that tries to steer her to a stereotypical role.

Ida Engvoll  plays Ove's wife seen only in flashbacks.    She brought a lot of energy as she had to make up for Ove's shyness.  She plays a title role in"Rebecka Martinsson"  tv series and also in some episodes of tv show I had seen earlier "The Bridge" a joint Danish-Swedish production.

The younger Ove was played by Filip Berg who like many Swedish actors gets most of his experience in television series.  He played a strait-laced man trying to make an impression on a vivacious woman.  He was a good complement to the older Rolf Lassgard.

The background music was provided by Gaute Storass, a Norwegian.  A few songs in Swedish and English helped set the mood.

Goran Hallberg was the cinematographer and had also worked on "The 100 Year Old Man who climbed out the window and disappeared."  Back in 2004 he filmed "ABBA:  Our Last Video Ever"

The editor Fredrik Morhedan has done over 40 films.  He was a creator for a popular Swedish tv series, "Blue Eyes"

A husband and wife team of Love Larson and Eva Von Bahr were nominated for an Oscar for best costume and makeup.  It was actually their second such nomination.  The earlier one was for "The Hundred year old man who climbed out the widow and disappeared."  I had seen that movie and even watched a special feature showing how they applied makeup to create the 100 year old in nine stages of aging--they had to speed up the camera as it was a very long elaborate process.  They had done some other interesting films--the Swedish version of "The Girl with the Dragon Tattoo" trilogy plus one of the English versions plus the Wallander series in Sweden and Britain.  In addition they worked on "Skyfall."  In Sweden film makers had not opted for expensive digital cleanup so that makeup crews had to be available during the shooting.  These two movies have made me appreciate makeup can have an important impact on a movie.

The producing team was headed by Nicklas Wikstrom Nicastra and Annica Bellander.  Nicklas had been a producer for over 10 films while this was only the third for Annica who had worked in the marketing department for several films.

If you are looking for a serious movie with a few laughs and leave you feeling good, this is good choice.  If you are sick of formula movies then maybe you wouldn't miss it, but really your enjoyments are rare and you should reconsider.
Posted by John F Davidson at 9:52 AM