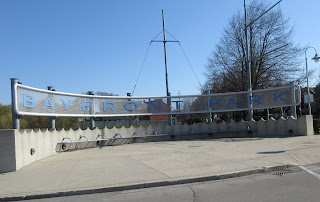 Today is about 10 days after my official retirement and my first visit to Bayfront Park.  It is scarcely ten minutes from my front door and for awhile one can pretend they are not in an industrial city.

With kids off to school, the morning is seniors time.    Still early in the season, but one can sense Nature reasserting itself. 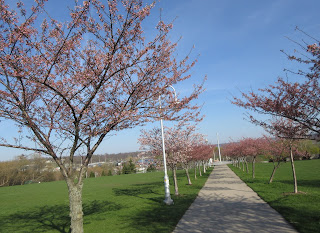 The Sakura project was the planting of Japanese cherry trees.  I have watched them over the years at first little more than saplings.  In 2019 they are growing taller and blooming brighter. 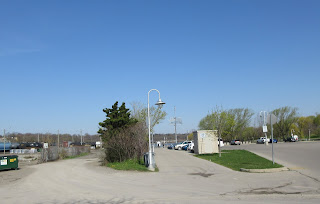 As one goes down to the parking lot there is a split between a path to the CNR railway and the trail. 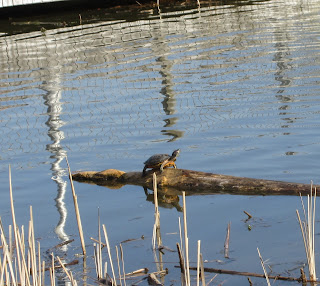 First time I have seen a turtle at this location. 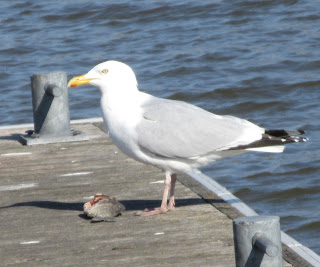 Seagulls are very common and I have seen many eating garbage once fascinated by seagulls feasting on french fries with vinegar.  This is the first time I have actually seen one about to eat a fish (from the Hamilton Harbour no less). 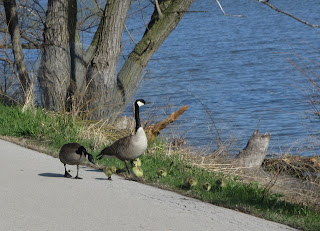 Along the trail greeted by Goose and Gander and some very young goslings.  At this time of year most of the goslings are kept safer in Cootes Paradise on the other side of the High Level Bridge.  They must be more trusting of trail walkers. 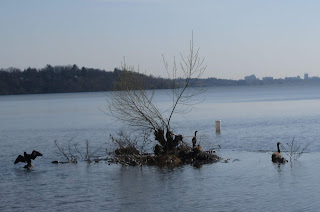 Cormorants are the most interesting birds.  Here is one on the left flapping his wings to dry off.  They can be tricky to photograph as they are apt to plunge under the water to chase a fish and emerge several meters away.  This island demonstrates a high water level.  It is similar or even the same as one I used for my Facebook background when the water was lower and more land visible. 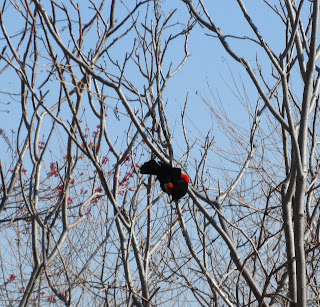 A redwing blackbird.  They seem to love being near the water. 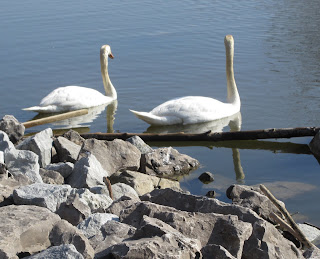 Two swans.  In a few weeks it is normal for them to nest right near where I earlier saw a turtle.

Somewhere near here I was spotted by an old friend, Barbara with a friend who had noticed beavers had been busy gnawing at trees.  Several years ago I had watched with others while a beaver dragged a tree across the trail. 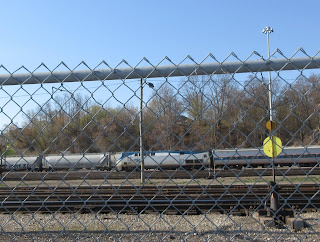 Gaze towards the east and one can see the Skyway Bridge and ships in the harbour.

Turn away from the water and one can see trains whizzing by. 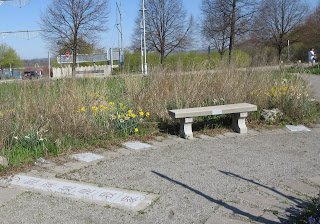 Just across from Bayfront Park is a corner that has been used for the Sunset Cultural Garden that had been set up by the Chinese community of Hamilton.  Many years ago I remember signing a petition to reserve this land for a garden.  People had been known to meditate here as it is so peaceful.  There are poems in stone in twelve different languages including Chinese, Korean, Gujarti and Arabic. 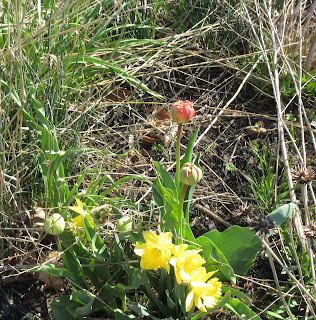 Flowers are blooming, but there will be more variety in a few weeks.  So something to look forward to.

I have enjoyed lots of interesting natural settings  in Canada and New Zealand more isolated from cities, but I am grateful that such a place a Bayfront Park exists for it gives me a sense of awe.
Posted by John F Davidson at 9:51 AM