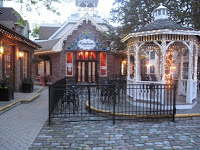 There is a concerted effort to paint Iran as the bad guy who might have to be taught a lesson.  Iran is far from perfect, but are they really the bad guy?

Much is made of their support for groups that are labeled terrorist.  Yes, that can certainly endanger some of our friends.  On the other hand it seems they are protecting fellow Shiites where they have been under attack in Yemen, Lebanon and elsewhere much like Americans profess alarm over Christians being besieged.  Yes, Tehran uses very scary rhetoric, but has anybody listened to Mr Trump?  Has much notice been given to the ever increasing restrictions on the Palestinians which many consider criminal?

A huge mistake was when Trump decided to withdraw from the Iran nuclear deal.  He claimed it didn't go far enough and he would force them to bend to his will.  We all want this to be a nuclear free world where everybody co-operates but in fact there is too much distrust.  Trump treats North Korea with more care, perhaps because he has been made aware they have nuclear weapons.  Libya decided to demolish their nuclear weapons, but that didn't protect Moamar Gaddafi.  Do Americans pay attention to history?

My core contention is that the Iran nuclear agreement not only gave some temporary relief from nuclear fears, but also was an opportunity to build trust that would allow other western concerns to be dealt with.  No matter what agreement the Americans can force upon the Iranians do they really expect others to trust them now?

In 1953 the Iranians had a democratically elected leader who was trying to follow the example of an agreement between Saudi Arabia and Americans to share oil revenue.  The British resisted and requested help from the U.S.  After a successful coup, Mohammed was replaced by the Shah.  To consolidate his power he sought help from the C.I.A. to set up SAVAK, a secret police service.  One of the trainers was Norman Schwarzkopf, later famous for the Iraq invasion.  They also involved the Israeli MOSSAD.  The purpose was to track and control enemies of the Pahlavi family.  The Americans left and SAVAK took a turn for more brutality including torture, executions, censorship.  The first director was repelled, eventually becoming a dissident and was assassinated in such a way to appear an accident.  Agents spied on Iranian citizens to uncover dissidents and as a by product promote distrust amongst neighbors.

With the election of Jimmy Carter the Iranians were coerced into alleviating torture and other abuses of power.  Ironically when the Iranian Revolution occurred in 1979, Carter also felt an obligation to support the Shah under siege.  This stirred resentment in Iran and led to the hostage crisis that helped undo Carter's re-election.  A few other ironies--during an oil boycott it was Carter who adopted a conservation strategy to make Americans less dependent on Mid-East oil.  This was ridiculed by Republicans who went onto ridicule climate change.  Another irony provided by the Republicans is that they spun an arms deal with the supposed enemy Iranians to finance an insurrection in Nicaragua.

The Iranian Revolution was sparked by civilian discontent.  As is often the case the people rallied behind fundamentalist clergy who in the end took control.  Similarly the Poles rebelled against the Soviets using the Catholic Church as a tool.  In another blog about corruption it was pointed out that when citizens have little room to protest they support fundamentalists.  see http://www.therealjohndavidson.com/2015/07/thieves-of-state.html

After the Iranian Revolution Iraq thought it would take advantage of confusion in Iran to invade it starting in 1980.  Americans, concerned about the prospect of a prolonged war supported Saddam Hussein including providing expertise on chemical weapons that not only killed an estimated 100,000 Iranians but were also used on Kurdish civilians.  Iran was able to quickly repel the invaders, but the conflict dragged on until the United Nations brokered a ceasefire accepted by Iran in 1988.

In 1988 an Iranian passenger airline was shot done in Iranian territory by an American missile.  Americans claimed they mistook it for a military fighter.  All 290 people on board died. Ronald Reagan expressed regret in a diplomatic note.  United States did not admit legal liability or offer a formal apology but did agree to a financial settlement of $61.8 million.

After 9/11 the Bush administration labeled Iran as part of an "axis of evil," although they had provided some intelligence for the crisis.  I have to admit that phrase came from David Frum, a Canadian conservative writer who I have come to like a bit.

There was some concern that Iran would develop nuclear weapons.  They were of course pictured supporting terrorists, threatening Israel and repressive.   Obama judged the priority to be avoiding nuclear weapon proliferation in the Mid East.  Iran had been under an embargo for decades and wanted relief.  Using the talents of John Kerry and co-operation with the United Kingdom, Germany, Russia and China an agreement was hammered out that restricted Iran's nuclear program and opened up relations a bit.  Many Americans were upset that the United States authorized a huge payment to Iran, overlooking the fact that it was money+interest that had been sequestered after the Iranian Revolution.  Monitoring adherence was part of the agreement and Iran was careful to keep their part of the deal.

I am not privy to intelligence that United States might possess and apparently neither are any other governments.  Iran is under provocation and there are political and social factions that are already quite upset with the Americans.  As the provocations step up and attitudes harden an accidental trigger could initiate a Mid-East war.  It is very likely to be larger than the Iraq War was and is also likely to be divisive among allies and citizens when the world should be prioritizing climate change and other global concerns.

It is not hard to speculate about motives.

At this particular moment Trump appears to be fishing for diversions.  The legal attack and perhaps even more the political attack against him appear to be making progress.  Another motivation might be to satisfy Saudi Arabia and Israel.  In the case of Israel they have some legitimate fears, although considering they already have nuclear weapons might be a little exaggerated for domestic politics.  Americans are perhaps too beholden to Israel who is making efforts to totally disenfranchise Palestinians.  Trump had some generous donations predicated on supporting Israeli goals.  In the case of Saudi Arabia Trump seems to have formed a relationship, one might say a business relationship.

The agreement should have been a building block.  United States and Israel could relieve tension over time.  Like Ronald Reagan once said "Trust but verify." That philosophy had a chance until Trump butted in, like he has in so many other ways.

earlier thoughts on the agreement
http://www.therealjohndavidson.com/2015/07/the-iran-nuclear-agreement.html

hopes for an agreement
http://www.therealjohndavidson.com/2015/04/will-we-waste-another-opportunity.html

if you enjoy movies, you might appreciate there are dissidents in Iran and there is also artistry.  http://www.therealjohndavidson.com/2016/03/three-persian-directors.html