WE'RE HEADED FOR A THIRD MELTDOWN THIS SNOW SEASON 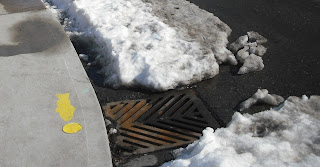 Geography does matter.  My house is located about a kilometer from Hamilton Harbour which is part of Burlington Bay and is really a western extension of Lake Ontario.  Going further from the lake or up the escarpment has slightly different weather.   It can be foolish to extrapolate experiences in one small unique area, but also foolish to ignore.

I am not exactly sure when the current snow season started, but it seems it was a little early when we got a dump of snow.  Very inconvenient for a short while and then we had our first meltdown including roads, sidewalks and lawns.  A bit later we had a second dump, but only a day or so later the meltdown started and soon all snow gone from roads, sidewalks and lawns.

Yesterday, January 18th we got another dump, but this one has been a little different.  After 10 cm of snow, the precipitation turned to rain, then overnite there was freezing meaning this morning sidewalks and roads were unusually slippery.  Ice is worse than snow, because it can be more slippery, but also because it is not always visible.  I feel safe to predict that by the end of this next week.

Several years ago Quebec suffered an ice storm.  My sister's family (south shore off Montreal) lost power and had to seek accommodation.  Driving towards Quebec several months later you could tell you were getting closer by the bent over trees.  The provincial government of Quebec learned a lesson moved much of their power structure underground.

As a youngster I grew up and shoveled a lot of snow, in Oshawa about two miles north of Lake Ontario and as a teenager moved about another two hour drive north to Haliburton.  The main difference I recall was that snow stayed on the ground an extra 1-2 weeks in Haliburton.  Always enjoyed a white Christmas and the only occasional problem with ice was at spring margin.

Hooked up to media and reasonably educated we realize the rest of the world has different weather patterns.  Canadians who have enough money head south in winter to Florida or the Caribbean.  A few years ago I escaped a cold snowy Christmas by flying to New Zealand and because of Skype we were able to talk to relatives suffering back home.

Climate change is beyond comprehension for most of us.  We are learning about increases in forest fires and floods and also droughts in faraway places.  We read about ice melting in Greenland and the Antarctic.  We can dig deeper and learn about literally thousands of studies that indicate climate change is really climate crisis.

The problem is there are a host of other voices (maybe a little less these days) that is very overblown and even a "hoax."  When we examine why this ignorance we learn that it is not just ignorance.  There literally is well over a trillion dollars worth of fossil fuels remaining to be extracted.  We learn that forests are being deliberately destroyed so that crop eating farm animals can expand.   The average person is struggling to keep up with their old expectations and are reluctant to change their habits.

A young, autistic Swedish girl has gained a platform and really represents the next generation.  Her message is getting harder for grownups with vested interests (most of us) to ignore.  There is a race to stem the tide towards disaster and we cannot be certain how it will turn out.  Perhaps it is better to assume we are in a house on fire and need to drop other priorities to give us a possible chance.

It is hard for me to believe that anyone anywhere is unaffected.  When our weather seems relatively normal it easy to learn of other places that are not.  Right now Australia is drawing a lot of attention, but also I learn there are serious floods in Africa.  Here I notice more ice and less snow--maybe a temporary aberration.

What can you do?  We are inundated with small things frequently and as much as possible need to adopt them.  We need to be informed and vocal.  Most important there are politicians at all levels who want power for a variety of reasons want to know what will tip your vote.  They need to know that if they want to get elected they NEED to pay attention to the Climate CRISIS.  Weigh their words and credibility like your future depends on it--it does.

My final word (at this time) is pay attention to what scientists are telling us and not the ones with  the most vested interests.

January 30,2020  As of this date most of the snowfall has disappeared and lawns, sidewalks and roads are over 90% snow free.  It did not happen quite the way I expected.  The temperature did go up to 1-3 degrees and there was a slow melt.  Before the weekend their was a lot of rain and that did most of the job.  Weather reports say there is a good chance we will snow within a few days.

March 6, 2020 well into a sixth meltdown.  This time rain is speeding up the process.  I would like to add these rapid weather changes help cause road potholes that cost money to both individual car owners and to municipalities.
Posted by John F Davidson at 7:37 AM