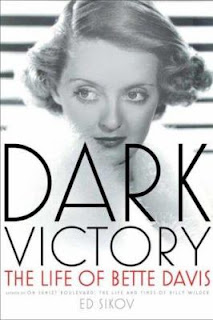 Unlike my other posts on movie actors this one involves a book.  Although by my teen years I had seen hundreds of movies from the same time frame as Bette Davis, but had not paid any attention to her.  She was not seen as glamorous or even an especially good actress.  She was a major star and in fact it stems from her acting talent.  "Bette Davis Eyes" song highlights one of her more appealing features.  A makeup artist expanded her lips and that somehow emphasized her eyes. Bette became very fussy about those who handled her appearance with Edith Head being her favorite dressmaker.  She also had her favorite cinematographers.

In 1928 she was an usher who had taken part in some theatrical productions.  When she reached Hollywood in 1930 she was asked to lay on her back while 15 male actors kissed her. as a sort of screen test.  Only Gilbert Roland is remembered.

The book, "Dark Victory" has inspired me to indulge in some gossip and the rivalry with Joan Crawford is very interesting.  Bette contrasted the two by saying that Joan was a movie star while she, Bette was an actress.

In 1933, Bette was scheduled for the first time to have her name above a movie title, but on the day set aside to publicize this occasion Joan Crawford announced her divorce from Douglas Fairbanks Jr. and dominated Hollywood news.

An early breakthrough from minor roles was with Geroge Arliss, a revered actor who praised her in 1934 with "The Man Who Played God,"

She had been loaned to RKO by Warner Brothers for "Of Human Bondage" (1934) with Leslie Howard.  She received an Oscar nomination and although she didn't win, some critics felt this performance was better than what she did win Oscars for "Dangerous" (1936 and "Jezebel" (1938).

While filming "Dangerous" it is said she fell for co-star Franchot Tone (she said as much several years later).  But Joan had got to him before and announced their engagement during the filming.

In "Now, Voyager" (1942) she was really made her up to be less than plain before being glamorized . She campaigned for this role and insisted upon a more bland look than management wanted as she thought she would gain more respect as an actress.

She and Joan Crawford had been paid to smoke to encourage women who wanted to look sophisticated.   More on the marketing of smoking with movies:  http://www.therealjohndavidson.com/2015/06/smoking-and-movies.html

Joan Crawford won her only Oscar for "Mildred Pierce" (1945), but for the role that Bette had turned down.

In"A Stolen Life" (1946) she played a dual role as a twin sister.  The shy one had lost to the more outgoing one, but it is the outgoing one who drowns and the survivor pretends to be the wife of a man they both loved.   Glenn Ford used this film in part to revive his career after two years in the armed services.  http://www.therealjohndavidson.com/2014/03/glenn-ford-forgotten-movie-star-from.html

During WWII she became heavily involved with war bond raising including train tours.  Together with John Garfield formed the Hollywood Canteen so that servicemen could visit movie stars.

"All About Eve" (1950), perhaps her best known film.  Joseph L. Mankiewicz managed to add dialogue that stresses the importance of the script, but allowed Bette to respond that an actress sometimes has to rescue the script before the audience disappears.  Nominated for Oscar along with co-star Anne Baxter which probably split their vote as neither won.

"What Ever Happened to Baby Jane?" (1962) brought two rivals together with Bette playing a deranged, bitter former child star while Joan Crawford played the crippled sister who in many ways managed the household.  Lots of petty issues.  Bette chose her preferred role and was concerned that director,  might give Joan more closeups, so had to be assured that Robert Aldrich was not sleeping with Joan.  Also knowing that Joan was on the Board of Directors for Pepsi, insisted that a Coke machine be installed on the set.  Bette was nominated and favored for another Oscar, but Joan not only campaigned against that, but was able to accept the Oscar for Anne Bancroft, the winner.

"Hush...Hush...Sweet Charlotte" (1964) was another chapter in the rivalry.  When Joan Crawford claimed she was too injured to shoot film, Bette helped recruit Olivia de Havilland.

Bette truly was in film, not so much for the glamour, but for the acting challenge.  She certainly did make herself into a long lasting movie star.  Over her career she was always fighting for artistic rights and tried to break contracts and at least once walked off the set.