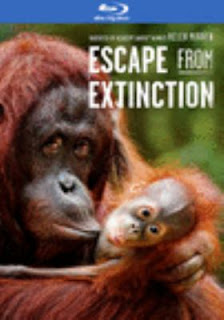 Modern man has competed with nature extracting necessities for survival, but also for our comfort and enjoyment.  With our greed we have upset the balance.  With an ever increasing population we are taking over land, adding pollution and inducing climate change.  Millions of acres of land have been carved out of forests for agricultural purposes.  Large numbers of humans like to hunt with always technologically improved killing equipment.  Others have found the illegal wildlife trade based on skins, food, medicines is one way to survive.

What makes the news are disasters such as wildfires, droughts  and oil spills that have literally killed millions of wild animals and accelerating extinctions.

In "Escape from Extinction"  (2020) they start off by identifying several species that have become extinct over the century and then catalogue many other species that are in dangerous decline.  But they then relate a few success stories.  The films continues with many challenges and successes.

Helen Mirren narrates and we hear from several animal experts.

In the process it forces one to take a different perspective.  As a youngster and even young adult I loved a visit to a zoo, but somehow by middle age I had decided zoos were cruel places and I did not want to support them.  This film suggests  (accredited) zoos and aquariums are part of the solution.   Still it is hard to believe that being confined away from your normal environment is all good.

Zoos have been subjected to a lot of protests, but in truth most of the staff is there for a love of animals.  With greater awareness zoos, or at least many of them of have become much more humane, with animals being given more space and effort .  They are aware of the protests and point out what they consider distortions and untruths.   For instance they talk about the movie "Free  Willy" (1993) and the efforts to release a captive whale.  They believe that animals that have been in captivity for a long time are poorly adapted to survive in the wild.  They counter with examples of animal experts better preparing animals that have lived in captivity and successfully restoring to a natural habitat.

To illustrate the importance of a balance of nature they recounted the story of grey wolves brought back to Yellowstone Park that played a vital role in the regrowth of the natural habitat and have revitalized species running from beavers to Bald Eagles.

Expanded development in India forced Asian elephants to encroach on towns and cities causing dangerous interactions.  Some animal experts learned that planting hot chilies would discourage elephants from going past the barrier.

In my home town, Hamilton there has been a controversy over extending urban development rights and supposedly paving over farmland.  A common concern as people prefer to live in detached homes (where builders can profit while the municipality has to provide infrastructure).  It seems the next generation is more likely to live in high rise buildings.  A complaint just heard over the past two or so years is coyotes entering urban areas killing pets and intimidating people.  They have nowhere to go and they are adapting to living on urban fringes.  Raccoons, squirrels and possums have already made adjustments.

An advantage zoo staff have over the rest of us is they understand animals better and are more comfortable handling them.  This is why they end up with wild animals that have been confiscated from illegal trade.  A drought in Africa threatened a large number of elephants and finally it was decided the best place would be American zoos where they could be fed and housed.

Other than providing accommodation for displaced wild animals zoos have used their expertise in the battle to avert extinctions.  They have set up breeding programs and even planned carefully to bring animals back to their natural habitats.   They have campaigned for conservation areas.   They have been involved with building corridors (bridges or tunnels) between wildlife habitats that have been separated by urban developments.   They have developed radio with GPS to track wild animals to both learn their habits, but if necessary to rescue.

In trying to conserve wild animals they are conscious that the rest are influenced by our fears of predators such as sharks.  The scary nature of sharks has been enhanced by movies, news reports and even music (Jaws theme).  Predators are necessary to keep a healthy balance of nature.  Sharks are hunted for soup and medicines with often the fins removed while still alive and the bodies discarded.

Perhaps another "noble" mission is to inspire youngsters who increasingly are removed from nature.  They are the ones who will carry on the struggle to preserve endangered species.

The one concern still remaining is animals confined into relatively small spaces.  We don't think about our pet dogs and cats being captive, but in fact I have two neutered cats confined to our house--for their protection.  Today most zoo animals are well cared for and many have become attached to their human handlers.  This actually means they are less adaptable to their natural habitat.

A film experience about nature affecting humans as "Lighthouse of the Orcas" (2016) with an autistic child and killer whales.  Very moving.  http://www.therealjohndavidson.com/2021/03/the-lighthouse-of-orcas.html

One interesting example for me was about New Zealand flightless parrots, known as Kakapo that are close to extinction.  Their eggs are laid on the ground which was not a problem before natural predators were brought to New Zealand.  They only breed in two to four year cycles.  Now it is taking extreme measures to build up their population, such as printing 3-D eggs.  I understand the Auckland Zoo is involved and so I hope to visit there (right beside Western Springs, a favorite stop for me). 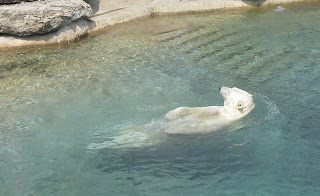 About two years ago when my son and his girlfriend visited from New Zealand we bought a group package for Toronto tourist attractions which included the Metro Toronto Zoo.  With only a little hesitation I decided to go.  As a curious person I found the animals entertaining.  I especially enjoyed watching the polar bears swimming.  The animals seemed well fed and a few were playing with the zoo staff.  As part of my research I stumbled on a video put out by the Metro Toronto Zoo that encapsulates much of the positive contributions of zoos.  https://www.torontozoo.com/fightingextinction  The video is worth the nine minutes and eased my guilt conscience a bit.
Posted by John F Davidson at 7:59 AM