Taiwan reaches our attention mainly because of threats from China.   Jessica J. Lee the author of "Two Trees Make a Forest" doesn't dwell on the potential crisis, but perhaps let the readers appreciate the uniqueness of the island nation.  Became aware of this book during the Canada Reads program that highlighted five books written by Canadians.

Jessica's maternal grandparents were both born in mainland China, but fled to Taiwan when Communist forces took over China.  Her grandfather had been a fighter pilot who fought against the Japanese during the Sino-Japanese War and WWII.  After joining the Flying Tigers de had received some of his training in United States.  Her grandmother had worked as a secretary for the Nationalist government whose parents chose to stay in Nanjing after the Communists controlled the country.

Jessica's mother was born in Taiwan and endured long separations from her father.  Eventually both  parents felt the Nationalists were too corrupt and migrated to Canada and settled in Niagara Falls,  Despite their proven skills they ended up as cleaners.  Her mother married a Welsh man and had lost most contacts with her Chinese relatives.  They found a telephone bill that had two numbers on it which eventually connected them to relatives in both Taiwan and mainland China.

When the Nationalists took over Taiwan they instituted martial law that last 38 years.  Censorship was very restrictive.  Not only were references to Marxism blocked, but words that resembled such as Mark Twain and Max Weber.  In October 1971, Taiwan was expelled from the United Nations to be replaced by the People's Republic of China.

Jessica decided she wanted to visit Taiwan.  As an award winning nature writer she wanted to focus on such things as botany, geology, birds, etc. Read more at her website:  https://www.jessicajleewrites.com/ 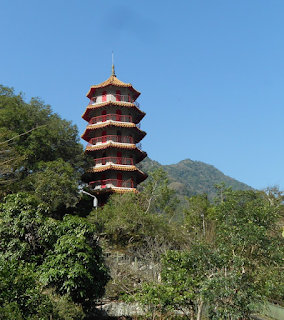 Geology  is important.  One factor brought out is that 75% of the land is on a slope.   To the left is an example of building on a slope.  Taiwan has lots of earthquake activity and some volcanic.  Most of the quakes are low on the Richter scale.  As a contrast Jessica recalls a 5.4 scale earthquake in southern Ontario was very scary, but her mother who had grown up in Taiwan did not notice.  Seismology was started by the Japanese with the some English contributions and today have developed a network that will help to respond to quakes.  The last severe quake in 1999 helped to create a lake.

Indigenous tribes formed in Taiwan over 5,000 years ago and resisted as best they could the Chinese, the Japanese, the Spaniards, the Portuguese and the Dutch. They now amount to less than 3% of the population.   Nevertheless Jessica noted both the Japanese, Dutch and Brits contributed to botany, geology and zoology.

As an island edemism is a feature.  Edemism basically means  the process where new species adapting to unique conditions  evolve and are localized.  One example that has been revived is the black faced spoonbill., not found elsewhere.   Taiwan has 60 mammal species that are unique to their country and contribute to global biodiversity along with birds and flora. 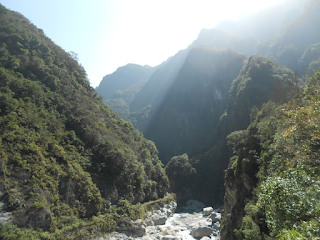 Trees form a critical role in Taiwan. Earthquakes also cause landslides and the Taiwanese have developed methods of dealing with them.  A key element is planting trees.  The forests had been decimated around the coasts to make way for farms and fisheries.  Lumber had been a major export.  By 1991 the government realized the importance of trees and enacted legislation to ban logging in natural forests.  They encountered tree poachers who could make a lot of money with little effort.  Forest rangers found one method to combat the poachers was to develop a DNA data base to identify tree poachers.  The government has found the trees are a boost to tourism as well as strengthening hillsides in the event of earthquakes.

Some earlier contacts with Canada Reads :

The two photos were taken by my son, Michael Davidson on a trip to Taiwan a few years ago.