My Two Cats are my Pandemic Saviours 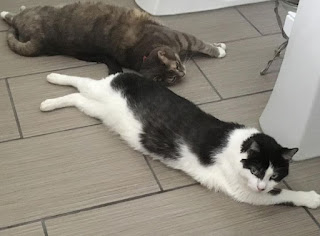 Retirement came  about 8 months before the Covid Pandemic started changing our lives.  My wife retired within the first few weeks.   I had started helping immigrants to practice English giving me some structure and purpose, but it was an early casualty.  Various restrictions came and went, at one point most stores were closed or tough measures taken including masks and limited accessibility.  Any regular readers of my blogs might have noticed an increase in frequency.  I watched more films.  Although things have opened up it still seems frustrating.  We had planned trips to New Zealand and/or Italy, but  they seem years away.  Things are looking up a bit, but time to reflect on our cats that helped us get through.

Mary Ditta, at work was my cat consultant.  She encouraged me to get a second cat when a young stray kitty approached us.  She also thought it a good idea to get a second cat, even a male to be a companion for the one already at home.

We decided years ago our cats would be indoor cats.  However one escaped during a pre Christmas gathering and we were unable to locate her.  On her own she returned a few weeks later just around Christmas looking the worse for wear.  Indoor cats live longer.

Our two cats had spent a lot of time alone and we had wondered what they do.  Except for a few incidents they mostly slept.  Probably partly boredom, but also conserving their energy.  How do they amuse themselves?   They both are addicted to boxes and an empty laundry basket which sometimes is carried with them in it.  Two cats amuse each other, but are also rivals for our attention  Hiding is one of their activities to play with us.  They are territorial with each other to some extent, but very upset with birds or animals that appear to invade their territory.

For a time I worked for a Chinese pet bed wholesaler.  The Chinese connection was something I did not seek, but had been recruited by a man who had been given my name by two of my pet retail customers.  In the end he died in an accident and I learned he had been lied to thinking he had an exclusive area.  On a call to Vancouver I actually was talking to the manager in China itself.

Some say cats (and dogs) provide unconditional love, but that seems a bit lopsided for me.   Feeding time has many rituals.  We sometimes try to defer their gratification, but are not enough consistent.  Cats are more independent than dogs and although felines can bug you for food and other times want to be stroked they can walk away and resist your attempts to get their attention.

The purr of a cat is one of the most satisfying sounds in the world.  You can't take it for granted, but seems like a reward for putting up with their more common aloofness and even demands.

For a brief time I had been recruited to help sell a new type of kitty litter.  One of my pet retailers had a friend with a son who had developed a new litter product in Mexico.  I learned a bit of the story.  The inventor was a Canadian who had moved to Mexico and somehow got involved in trying to develop a lighter kitty litter that old ladies could easily lift.

This led to finding a plant from Mexico that was much lighter than conventional litter.  He tried to discover a clumping agent and while eating with his mother (who had recovered from cancer) noticed flax worked for clumping.  Made contact with flax manufacturer in western Canada.  The product was tested in Mexico City at a rescue charity.  It seemed to work.  Each night the manager put litter through a sifter that made it easier to deal with a large number of cats.

A big sales pitch for me was that everything else I sold slowed down in the winter.  Kitty litter actually is more needed in the winter as cats allowed outdoors don't bother with litter in the good weather, but in the winter they spend more time indoors and their owners are forced to deal with the unpleasant smell.

Unfortunately my cats did not like the new litter and refused to use it.  Also as a small business owner, my friend overlooked many marketing details some of which were pointed out to me by another of my pet retailers.  They had a nice interesting story about how the product had been developed, but when packaged the story was inaccessible to the casual observer.  Although I got a few retailers to try it, the owners were so discouraged that they stopped manufacturing it.

Each cat has its own personality.  The first time we had two cats, the second one was a stray and we saw a little resentment, but no fighting in our presence.  The stray was the more active of the two and would scare us with jumping up to a second story rail and seemed to enjoy our reaction which was mainly fear she would fall.   When Maggie left us we were surprised Molly seemed more listless and didn't live as much longer as we expected.   The not so pleasant aspect of living with cats:   http://www.therealjohndavidson.com/2013/12/maggie.html

The second pair of cats were closer in the sense of when we got them.  The second cat, Oscar, a male (the black and white one above) was more aggressive and at first shoved Izzy, the older, larger female cat aside to eat out of the same food bowl.  This was so exasperating for me that I sometimes picked him up and put behind a door to give the female a chance to eat in piece.  Izzy's reaction was unexpected as she went upstairs where we had closed Oscar behind the bathroom door and waited outside.  Over time that changed as Oscar actually although more active was smaller and it seemed strange that they took turns being more aggressive, but generally tolerant.  They do play and it amazes me that the smaller one is more aggressive.

Curiosity is a trait associated with cats.  We admire it with human inventors, but laugh at cats.  Laughter is supposed to extend your life or at least make it more enjoyable.  My two cats provide a lot of laughter either when playing with each other, acting as rivals or trying to get our attention. The Dalai Lama has been a good model with the merits of laughter and my cats provide the opportunities.  A dab of peanut butter on my finger has become a ritual with Oscar that makes me laugh at his antics.   He plays cool and makes me chase him and reassuring, then he gets serious and obviously loves the flavor.

The pandemic has been an ordeal.  Retirement was supposed to be a time to enjoy life, do some travel and to do meaningful things.  We are all making adjustments and I am grateful my cats have made it easier.

Quietly watching my cats I have time to think and ponder.  http://www.therealjohndavidson.com/2015/10/philosophy-from-observing-cats.html