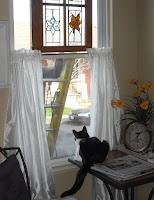 What are the big philosophical questions?  We struggle to get through the day and put food on the table, but given some reflection we all ponder what is it all about.  Then we try to forget and move on.  If you live long enough you get to see the full life cycle, not only for yourself, but also observing other people.  Cats have a shorter life span and are considered independent. 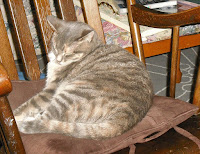 As an adult all my cats have been house cats, not allowed outside so really just caged pets or it must seem imprisoned.  They don't have to fend off predators, kill their food or seek shelter from the elements.  As they have been neutered they have lost that natural instinct.  Their sole purpose seems to be to amuse and comfort their owners.  Evolution scientists tell us there are only two purposes--to survive and to procreate.  We all die and wonder and worry what it is all about.

How do the cats see their purpose?  Without the need to kill or seek shelter and no mating urges what can they do to give meaning to their lives.  The first might be to seek amusement.  Some of the amusement I have observed seems like preparation for hunting.  They play fight constantly and I have seen them "stalk" little toys to pounce on them.  When they are in the mood they rub up against people, purr and will often lick bare skin.  That is, of course only when they are in the mood.  They have the ability to sleep easily and we can only wonder what they are dreaming.

As owners we are often amused to watch our pets and very often comforted to have them cuddle up with us.  Seems well worth the effort to feed and shelter them.  We also get carried up in the need for amusement which is often more satisfying than pondering our purpose.

Cats are territorial like most other creatures including humans.   It is common for strange cats to be sighted outside our windows.  Our two cats get very concerned over this intrusion and will go from window to window to express their displeasure.  They feel a sense of ownership or one might say a feeling of belonging.

Elsewhere I have written about grief.  For some youngsters the death of their beloved pet is their first real encounter with mortality.  As an adult I have been shocked at how I felt when my cats have died and have tried to rationalize it.  In reality it makes us aware of our own mortality and how things can be taken away from us.  http://www.therealjohndavidson.com/2013/12/maggie.html

Curiosity is supposed to be a weakness of cats, but it has been a driver for human growth.  If we weren't curious about a lot of things we would never understand them and be able to either take advantage of the way things are or to improve upon them.  Nothing ventured, nothing gained.  Mistakes are necessary to grow.  Seeking knowledge and understanding seems like a purpose in itself.

Are we deluding ourselves thinking we are very superior to cats, or other animals?  We live and die just like them.  We have a more sophisticated system to survive and procreate, but the basics are similar--others provide food, even killing.  We are or think we are smarter and can amuse ourselves more intelligently, maybe productively.  We control their lives, but are we aware of what controls our lives?

At one time as a non owner it seemed ownership should be avoided.  A cat is a responsibility.  As a salesman who used to call on pet stores I came across a store owner in  New Brunswick who would not sell one particular small rodent, degas in less than a group of six.  I had felt guilty to leave a single cat by itself while my wife and I worked all day and our kids were at school.  Our first attempt to provide a second cat as a companion did not work out like we hoped, but our second attempt worked out better.  Mary Ditta pointed out that not only did we enjoy the cats, but we saved them from a much worse life.  Ultimately the main purpose is to serve others.

In many ways I am a loner, partly because I like doing things that are not shared by my immediate crowd of people, but like anyone not a psychopath I value human contact.  Cat contact in some ways is even better.  Although they share even less of what I like to do, they are constant--except when they have one of their moods.
Posted by John F Davidson at 1:25 PM