How I became a Cat Lover 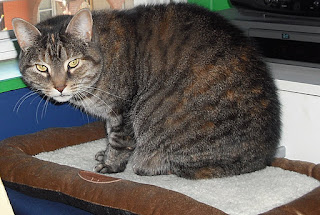 I grew up as a dog person. There always seemed to be a dog in the family. My father used to say to have a dog love you, you had to let it sleep in your bed. Well that certainly happened to me. 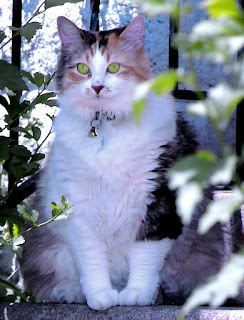 Now forty years later I am a cat person and although I still like dogs, I have little desire to own one. A lot of things helped steer me this way, but as usual people are important.

Growing up in Oshawa I remember one of my younger sisters, Susan picked up in succession two stray cats and kept them. I was sure my father (who seemed very intolerant of all sorts of things I wanted to do) would not allow this. Well he did. Perhaps he felt it would be good for Susan and not at all upsetting to him. I learned later that although he always had a dog he had "owned" cats as a young boy. 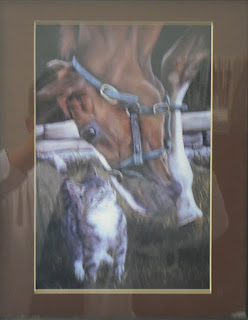 For a brief time I lived with my sister Pat who had a Himalayan cat from her mother in law. Very cute, but not my cat and I didn't really get attached.

Moving out into the world and not giving pets much thought I eventually owned a house. My sister-in-law Lorri decided a cat would be appropriate for her sister, my wife, Sharon. She even asked me if I was okay with it. I said "no.". She decided it was such a good idea she would go ahead anyway.


At first I was very resistant. Even when I felt myself melting I put up a good front. After awhile I found myself becoming more and more attached and found it hard to resist petting our cat, Sheba. Eventually and I am not sure how many years went by Sheba became ill and a decision was made to put her down.  Neither of us wanted to actually take her to a vet. A friend,  Debbie Bulir agreed to help out and we gave her a key and the freedom to decide when.


I was devastated. At the time I felt very guilty, after all men aren't supposed to get too emotional about a cat. I decided I did not want to go through that experience ever again.

Ironically around this time I made sales calls on pet stores and veterinarian clinics. Constantly talking with people with an attachment to dogs, cats and other pets. I had trouble connecting with their emotions and their daily concerns.

From my visits to vet clinics and developing a newsletter I became aware and then interested in grief counseling for pet owners. I realized I didn't need to feel guilty about my reaction after the death of my first cat.  Cats can give you unconditional love (certainly don't worry about your ups and downs) and are very forgiving.

At about the time my oldest daughter left to go to university in far away Halifax my sister-in-law Lorri decided it would be a good time to give us another cat, from one of her litters. She very considerately asked not only me, but also my son if it was ok. We actually both said "no", but this didn't deter Lorri. I didn't resist very long at all.

A few years later when my son had left for York University, not so far away (but shortly took off to Victoria) a tiny kitten crawled up to our porch in the rain. I told my wife not to feed it, but I started to weaken as the kitten was very persistent. I felt guilty about leaving Molly home by herself while we both worked and no children for company. I talked to Mary Ditta at work who had a reputation for cats. I ended up suggesting the idea of taking in the stray. Our first stray soon named Maggie is now part of the household. Another woman at work, Natalie Warren explained that stray cats are often more affectionate probably because they are more grateful.

It turned out the two cats don't get along. Their contrasting personalities are very interesting. Maggie wants to be friends, but Molly is very territorial and terrorizes her younger house mate whenever they get too close. Fortunately Maggie is much more spry.

I have a lot of women to thank for my love of cats. Some say and I believe it pet owners live longer and are happier than non pet owners. Mind you cats want your attention at the most awkward times. One personality trait is their independence. They want attention a lot of the time, but they walk away when they feel they have had enough.

Photos of my two cats. Molly is the good looking one (in a plump sense) and Maggie is the sleeker and more gentle one. The photo of a reprint of the horse and cat by Cathy Carter symbolizes my animal loves. The original painting was used in a campaign for Orange aPEEL, a company I worked for with a strong sense of mission. When I first saw it, I thought it was ridiculous and said so.  But I actually had people call me and want to know where they could get a reprint. Taking a closer look I decided I liked it and at one time asked for it as a bonus and now hang in on my office wall right in front of my desk.
Posted by John F Davidson at 5:33 AM