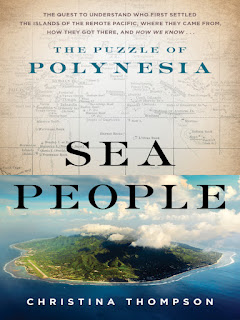 With my son, Michael living in New Zealand my interest in Polynesia has been revived.  Seemingly they live in a paradise, but one wonders how they arrived at all these remote and isolated islands in the midst of the world's largest geographical feature, the Pacific Ocean.  Christina Thompson examines the history and explanations in "Sea People  The Puzzle of Polynesia" (2019).

The European discovery of Polynesia started about 1595 and while opening up global knowledge also presented a clash of viewpoints.  The Europeans were a literate society with sophisticated tools.  The Polynesians were an oral culture with perhaps a deeper feeling for nature.

Many European nations took part in expanding their knowledge of the Pacific Ocean.  The Dutch, French, British, Spanish and Russians.

One event that opened up western awareness of Polynesia was when it was realized the best opportunity to observe the transit of Venus (when it moves between earth and the sun) would be in 1769 from somewhere in the middle of the Pacific Ocean.  The opportunity had been missed in 1761.  James Cook was chosen, partly because of his surveying skills (had surveyed Newfoundland) and likely because his personality inspired confidence.

Prior to this Tahiti had been approached by the British captain Wallis.  After some efforts to land, the British ship, the Dolphin was attacked, with stones but when they shot off some cannon he natives tried a different tactic.  They offered goods to trade, but the critical tactic was for their women to offer themselves.  Pretty soon the sailors were sleeping on the deck as the nails that held up their hammocks were commonly used to swap for sex.  Wallis returned to England in 1768 a few months before Cook left and this time to the newly found island.  The French were in Tahiti shortly after Wallis and encountered only friendly trade.

When Cook worked in Tahiti he encountered Tupaia, a consort of the Queen and a very talented man.  Tupaia requested to accompany Cook and although both men resented each other they did also complement one another.  Tupaia, like other Tahitians had a knowledge of other Pacific Islands and he was able to anticipate how close Cook's crew was to other islands.  He also was useful in placating natives including with the Maoris in New Zealand.  Tupaia had a curiosity and rode over to Australia (which he had no knowledge of) and continued through the Dutch East Indies.  He died of dysentery on one of these trips along with some of Cook's sailors.  Tupaia was later credited with some paintings that had previously been ascribed to Joseph Banks.  Cook died in Hawaii only a little later.

Easter Island was the most isolated inhabited island and the Dutch were the first to arrive there.  In 1722  Jacob Roggeveen approached the island that is known today at Rupa Nui.  We know of the gigantic statues and have speculated how they were installed.  Perhaps tied to the task was a lack of trees, although there was proof that trees had once grown there.  Another interested feature was that Roggeveen had been offered sweet potatoes, a plant that apparently came from South America.

New Zealand was another Dutch encounter, but not really explored until Cook did a tour and did converse with the Maoris.  The author's husband was Maori and during the research for the book he had an easy time with other Polynesians who recognized him as a "brother."

Over a period of time theories were developed how these remote islands had been settled.  One that still draws attention was that they came from South America.  Thor Heyerdahl took some loose facts and ignored others, but felt convinced strong enough to make a voyage to prove his point.  He raised money from various institutions.  A raft was constructed from Balsa wood that had been cut in Ecuador.  The Kon-Tiki expedition started 1947 from Callao, Peru and towed 50 miles away and released.  They drifted along the Hunboldt Current which would to the South Equatorial Current that would sweep them towards Polyneisian islands.  101 days later after many hardships they reached Raroia, but were met with coral reefs and were fortunate to land.   It was a promotional success (with books and movies), but serious scientists think it does not stand up to scrutiny.  One can speculate about currents and sweet potatoes, but the Polynesians seem to have different origins.

Drifting was an early theory, assuming the Poynesians lacked any real sophisticated science or engineering.  Currents do indeed steer wanderers or those lost at sea, but one wonders how they kept knowledge of other islands other than the one they settled on.

Radio carbon dating started being used after 1950.  It was slow, but got a boost when a University of Hawaii project enlisted students and a Japanese student asked about pottery.  At first there were no known pottery sites, but the idea led to fish hooks.  This allowed to calculate dates of settlements and uncovered other problems.  The process itself was evolving and spreading around the Polynesian triangle.

DNA studies were promising, but  ran into resistance and many Polynesians considered it a invasion of privacy.  Another method was to track companion animals to gauge how when they appeared at different locations indicating when their human master were as well.  Over time many were more open.  The general feeling is that Polynesians were a mix of Austronesian and Melanesian (between Indonesia and Philippines).  Research seemed to establish very early settling in Tonga/Samoa area and a long delay before more remote areas were reached.

One still wonders how they had the courage (or knowledge) to find the far away remote islands.  Oral traditions had been dismissed by Europeans, but lately have been studied more closely as they were often genealogical histories.  Much of the early wisdom has been lost, but still there are men who have retained some of the tricks.  They were able to read the sun, stars, waves, swells and birds  One scholar was told that in some instances the most effective way to the logic of the ocean would be to lay down flat in the boat and feel the way.  According to David Lewis the natives found male testicles provided the most sensitive balance.

A common boat used in the Pacific was an outrigger, which was a boat that had a wooden structure attached to the hull that made capsizing less likely.  The idea had originated in southeast Asia and made long voyages with many people possible.

A philosophy that encouraged travel to the unknown might be labeled "foundation focused ideology."  The stories that related their history included the benefits that fell to the first ones to find new land.

Most of us are descended from those who migrated through the the land masses--up from Africa, over to Europe on to Asia then to North America and then to South America almost all on land with stretches of water, but more land in sight at some points.  The Polynesians are remarkable in their daring, but we should also credit them with reading nature.  We are still learning how they did it.

Read about a trip to New Zealand that included a Maori ceremony:  http://www.therealjohndavidson.com/2018/01/starting-2018-in-new-zealand.html