"WINDFALL" WHO BENEFITS FROM CLIMATE CHANGE 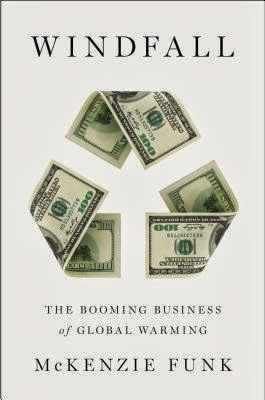 Some of us find it difficult to understand how people can be so complacent in the face of scientific evidence of climate change. McKenzie Funk, author of "Windfall" can help explain.  As usual it boils down to money.  While some deny the problem, others see an opportunity.

While acknowledging that many, likely the majority of people are likely to suffer, some investors can see where there are opportunities.  Many of these smart insiders feel there is nothing much they can do to stop climate change, others cold heartedly prefer to maximize the opportunity.  Others are adjusting to changing circumstances.

McKenzie started a story about Alpine ski resorts having serious concerns with declining snow cover. Then he veered off to discuss Gulag camps where desalination was developed amongst Jewish prisoners.  Eventually with an Israeli sidestep this evolved to more sophisticated processes that helped make the Sochi Olympics survive melting weather.

Desalination, now used by Israel, Spain, Australia and others is one method of restoring drinkable water to where it is wanted, but it requires a lot of energy that contributes to climate change.

Canada stands to benefit in a number of ways.  The Northwest Passage is becoming more navigable each year and although foreigners assert it should be international waters Canada will still benefit. Although drought in middle latitudes threaten to increase food commodity prices, Canadian agriculture should be able to expand its growing season and area.  Canada also stands to benefit from increased demand for energy with both the oil sands and Arctic drilling.

Climate refugees may be hard to identify, but drought is a little easier.  High food prices force many to seek better conditions.  There is awareness of this in Europe increasingly threatened by immigrants from Africa and in India from Bangladesh and in the southern US from Mexico.  These can all be expected to increase.  One group that benefits from this are private prisons.

Small islands and coastal cities are most endangered by rising water levels.  One nation with a lot of experience and expertise is the Netherlands.  They offer a variety of water management solutions.

Another consequence of climate change is that insects spreading northward and with water, causing diseases like Dengue, Nile virus.  Big and far seeing corporations are developing strategies such as genetically modified seeds as well as genetically tampered insects.

Geo engineering options are becoming more sophisticated.  Patents are being registered.  One basic source is the fact that major volcanic eruptions have had a cooling effect on earth.   One consequence affected rainfall

Not everyone is concerned about money so much.  Greenland has many monetary opportunities, but underlying it for many is the chance to be independent.  Oil, agriculture, mining, tourism, water are all areas that would help them to independence from a benevolent colonizer, Denmark.

The average person can do very little (but they can do some things such as set an example, educate). They can adjust within their circumstances.  Wealthier people in positions of authority can do more, but there is risk of losing their power.  Then there are opportunists.  Between adjusters and opportunists the rest of us have an uphill battle.  It is not just climate deniers that are the problem.

Some people think they are beyond consequences.  Maybe they are right.  Or maybe there is more than meets anyone's eyes.
Posted by John F Davidson at 12:04 PM