OVERBOOKED and thoughts on tourism 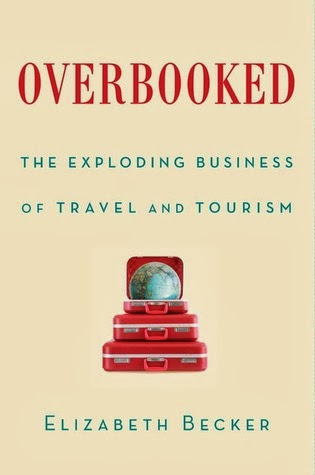 In a world where robots and low income workers are sucking up jobs, tourism is a growth industry.  It creates jobs, cash flow and meaning to a lot of people.  But and a big BUT, author Elizabeth Becker points out there are some serious concerns.

A lot of what I read was about exploitation of workers and environmental and cultural problems.  In the United States cruise business, the owners have exempted themselves from American laws so they can hire foreign workers at greatly reduced wages.  Some tourist destinations are so popular that the masses of people cause serious environmental damage as well as diluting their cultural uniqueness.  Tourists at Angkor Wat area have lowered the water levels so much that foundations have weakened.

Many nations have caught onto the idea that attracting tourists is a great way to provide jobs and tax revenues as well as helping foreigners to appreciate their country better.  Voluntary transfers of money from rich nations to poor nations does tend towards greater international equality. Unfortunately too much of a good thing creates stress.

To the author the two most ideal examples were France and Costa Rica.

France, is the number one international tourist destination.  Way back in 1936 France was the first nation to have a two week paid vacation.  More than most nations France invests money into culture and a lot of tourists have come to respect their homage to artists and writers.  They have developed a reputation for one of the best cuisines and vinicultures in the world and it is supported by boosting agriculture which also makes the countryside more pleasant for rail and motor rides.  Tourism support is important even in tough economic times.

Costa Rica is a small country without an army.  They have taken an approach that emphasizes nature. Many of their rivals try to cram as many people into a cruise ship or tour bus hiring cheap foreign labour.  Costa Rica uses its natural parks and encourages small tourist groups with local trained guides and staff.  Eco-tourism is important to other countries such as in Africa.

United States was a major tourist destination, but is now trying to catch up.  The Republicans under Newt Gingrich used their power in the 1990's to downgrade tourism as they felt it was not proper for the government to involve itself.  It had been planned to emphasize the tourism opportunity offered by the 1996 Atlanta Olympics, but even though Newt Gingrich represented Georgia he and others forced budgets to be reduced as much as possible at this time.  Not long into the George W Bush tenure, 9-11 shifted everything and the biggest concern became security with tens of thousands of security staff being inserted into the tourist process.  Barrack Obama was criticized for flying to Europe to support an Olympic bid for his home town of Chicago.  He and many others were shocked that Chicago was the first city to be eliminated from the finals.   An investigation uncovered that foreigners were very reluctant to visit the United States as there was too much awareness of humiliating treatment of incoming tourists at entry points.  America has a lot to offer and the situation is slowly turning around as the Democrats feel the government has a strong role to play.

A basic problem is cramming too many people into limited facilities.  One of advantage is that such efforts make it more affordable, but too many people bundled together make the travel experience more superficial and harmful.  Placing restrictions on vacation enjoyment for environmental reasons is seen by some as elitist.  A partial solution might be education--both for those guiding us and for tourists. Elizabeth Becker likes the idea of locally more thoroughly trained guides who can give more value and deserve more compensation.  We have all heard of the ugly American and the author now says the problem is more exemplified as the ugly Chinese tourist.  Traveling is an opportunity that we can all appreciate better when we understand cultural differences should be celebrated not diminished.

One fact that surprised me was that travel agents are making a bit of a comeback.  Most people search the inter net and are able to make all sorts of arrangements that seem to save money.  Like anything else important, an expert travel agent can help make your travel time more enjoyable and respect financial restraints.  Specialization is one key strategy for agents.

Traveling has played a strong role in my understanding of the world and my own country.  When my best friend, Bob Stone moved to Vancouver I got a chance to see a distant part of Canada I had vague ideas about.  Many things were enjoyable, but one thing that struck me was the ferry boats.  I didn't realize how big they were or how critical for linking the largest city with the provincial capital. When my son, Michael decided to go to school in Victoria that widened my understanding of Vancouver Island when I ventured outside Victoria and my friend Bob joined my wife and I to enjoy Tofino and Coombs.

While visiting Victoria I learned that advertisements don't always guide you to the best experience.  I learned about my favorite restaurant, Pagliacci from a guide book with no ads and later was directed to another favorite one, Ferris Oyster Bar by locals we encountered on a walk.  My daughter Heather decided to go to school on the other coast, in Halifax.  Discovered another great city and learned other great places like Cape Breton and Yarmouth.  On a sales trip I discovered Ile d'Orleans just off Quebec City with a very lovely culture.  http://www.therealjohndavidson.com/2012/07/travels-of-salesman-part-3-quebec.html

I have also visited United States and pretty much always enjoyed myself including New York City, Florida and Las Vegas.  I was surprised to read in Elizabeth Becker's book that most of the tourist workers in Las Vegas are unionized proving you can be fair to workers and make money.


Living most of my life near the Great Lakes (Oshawa, Hamilton) I actually lived in Haliburton, a popular cottage area and learned to appreciate its good points.  Later I spent short time in Port Dover, Port Stanley and Wasaga Beach, enjoying them.  Local vacations are usually easier on your budget and time table, but they offer relaxation and learning opportunities too.

On an international scale I have visited Cuba four times, all at the same resort and each time expanding a little bit beyond to include Havana (fascinating in many ways), Veradero downtown, a cave and sailing for the first time.   Check http://www.therealjohndavidson.com/2013/03/my-silver-wrist-band-visit-to-cuba.html
More recently went to New Zealand which had me out of my time zone and hemisphere  more completely than ever.  http://www.therealjohndavidson.com/2013/07/new-zealand-part-1.html

Money is the big limitation for traveling, but it is one of those opportunities that make one want to extend their resources.  My son, Michael has been to many countries in Europe, Asia and Africa and has a much better idea of how other people think, what they live with and has seen many beautiful things.

Many of these vacations were important enough to my psyche I have written blog posts on them.

A few summary thoughts.  Tourism is a wonderful thing.  You don't have to go far to to learn something new or to enjoy yourself.  Ideally you are looking for two way conversations with people who have a different perspective or view something beautiful.  Tourism is a logical way to spread money, giving many people a meaningful job. Tourism cannot be easily outsourced, but too much can be duplicated as when shopping malls and theme parks seem too much alike.
Posted by John F Davidson at 3:19 PM