Disposal of our dead bodies 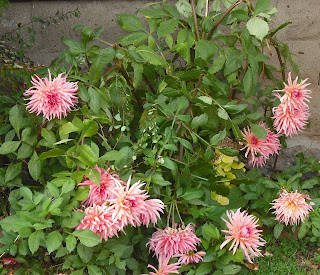 Death may be natural, but it still horrifies us and humankind has always sought ways to alleviate our distress.  Not only fear, but also guilt and grief.  Rituals have developed differently around the world, but underlying them all is our need to deal with the profound inescapable event.  We are looking for some sort of comfort as we resume our lives without our loved one (or at least someone we felt some attachment).  Any death reminds us of our own mortality.

In modern times some people rebel against the commercialism of funerals and others worry about death's role in our environment.  Religious beliefs are under attack and many seek reassurances they can't find through traditional means.  We want to show respect for those who died and we want death to fit into some comforting overview.

Funeral ceremonies are a rite of passage.  After embalming a body, fixing it up with cosmetics and dressing the corpse with their best clothes for a few days display many of us bury the bodies of our loved ones in a hard box and put it six feet under (supposed to protect from wild animals).  Words meant to comfort are spoken.  We visit the tomb stones, lay flowers and perhaps weep.  For the most part I am familiar with this routine, but now realize there are alternatives.

In ancient societies we know the dead were often buried with artifacts of things that were important to them and often people still do that.  Books, clothing, jewelry, and more.  Certain places were set aside for burials and with markers to remember.  The bodies were often just loose, but as time went on more solid coverings were used to protect the body from the elements.

Cremation has a long tradition in India and other countries.   The body disappears leaving some ashes that people can leave at an institution, keep in their homes or as some romantically envision, spread over significant land or water.  Early Hindus were repulsed with the slow decomposition of the body and had the idea that dead bodies made soil infertile. More theological support was that humans needed to detach their spirit from the body.

Christians avoided cremation as they associated it with pagans.  Some felt that it denied the possibility of resurrection, although others felt God could resurrect ashes as easily as flesh and bones.  Ironically fire was used to punish heretics.  Later cremation gained acceptance as one way to contain contagious diseases and also was less expensive.  A concern expressed by some is that green house gases are used.  Originally wood was used as the fuel, then later oils and gases to be speedier.  Efforts are being made to reduce the environmental impact.  One other factor favouring cremation in our overpopulated world is that burial space is becoming a precious commodity.

The Zorastrian religion started in Persia well before the birth of Christ.  In fact apparently one of the three wise men represented their faith.  They have survived to modern times with most living in India where they had fled after persecution.  They do not advocate for burial or cremation, but have developed a system where dead bodies after ritual cleaning are laid out in a dakhma (translated as towers of silence) to be devoured by scavenger birds and later their bones to be dissolved in lime and eventually washed to sea.  Although they do it based on their religious philosophy others consider it a green solution.  In India the bird population declined as poison used in agriculture killed too many and today Parsees as followers are called are breeding captive birds.

Burial at sea was once common out of necessity on long sea voyages, but today it is done more by choice.  Coffins, urns, ashes or sewn in sailcloth  are all used.  Sometimes it is another romantic idea relating to personal experience.

An early movie I enjoyed was "Beau Geste" with Gary Cooper and Ray Milland which dealt with three brothers who at a young age displayed a reverence for what they identified as a Viking Funeral which was being burned in a ship that sank.  Near the end of the movie one of the brothers had an improvised Viking funeral (in the desert).

Two methods of cheating include mummifying and cryonics.  Attempts to be immortal are natural enough  They are for the wealthy (and vain).  Do we really want to be immortal?  Can mankind support immortals and newborns?  Perhaps a topic for another blog.

Mummifying best known from Egyptians.  The powerful Pharaohs felt entitled and arranged to have their bodies preserved and encased in the incredibly expensive Pyramids.  Many mummies have survived and can be seen in museums, but obviously they were very wealthy or favoured by the powerful.  Embalming is one step in preserving bodies and is still very common.  Mummifying was also done in other parts of the world with the oldest discovered in South America.  We associate the process with chemicals, but in some cases dehydration was the mechanism and sometimes it was not planned.

Modern men with greater technical resources offer another solution called Cryonics.  Basically it boils down to timely freezing in hope of medical improvements.  The most famous example is baseball star, Ted Williams.  Not aware of anyone having been revived, but hope is eternal.

As a young reader I remember reading a version of Hiawatha as told by Henry Wordsworth Longfellow of a story that has stayed with me.  There is a lot of controversy about where Longfellow got his original material, but apparently based on native Indian legends including Iroquois.  Hiawatha was remembered as a noble leader who sought to improve his people's lot in life.  He prayed and fasted and when he convinced the gods that he was sincere he met a man dressed in green and yellow who offered to wrestle with him.  After several days the stranger told Hiawatha that he, Hiawatha  would conquer him and that he should be laid in the soft earth where rain and sunshine would flow down upon him.  After this was done and some time had passed, corn, considered a great gift to the Indians started to grow.  To my simple young mind it was the first thought that life can come from death.

Recently I learned of a new phenomena, composting bodies. This is still in its initial stages but consists of a tower 3 stories high where mourners with support can wrap the deceased in simple linen, carry the dead body to the top where it is lain (after a ceremony) amongst compostable materials and allowed to decompose.  The body is conveyed to lower stories until it eventually has fully decomposed and can be given to the family or friends or appropriate neighbours.  The remains can be disposed of to fertilize flowers or trees, but not currently food.  Seems the most natural of all.

You can read more about this new way through the Urban Death Project at  http://www.urbandeathproject.org 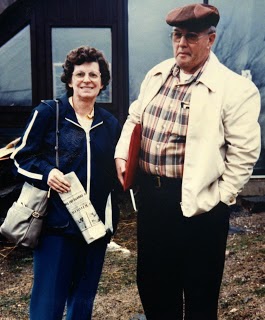 Funerals are really for the living.  In today's global busyness our "close" relatives aren't so physically close anymore. Too often it takes a death to make us realize we do share something in common.  It is literally our last chance in the sense that doing anything else says something about our priorities.   We need to feel we have done the right thing, accept that a loved one has died and commemorate with others who share some of our feelings.  The last wishes of anyone are something we try to respect.

For myself for the past few years when I summarize the previous year in an annual blog I have been starting off with personally significant people who have died and try to remember how they impacted my life.

Photo, by Miriam Barnes is of my parents who have been dead 30 and 15 years respectively, but not forgotten.
Posted by John F Davidson at 2:31 PM