Synchronized Skating would add to the Olympics 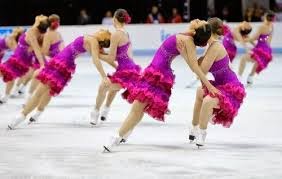 Dealing with the negatives first.

Too many athletes already.   Each athlete represents an increase in accommodation, transportation and to some extent facilities.  Television time is fixed and each new event spreads interest a little bit thinner.  Maybe team sports should be separated  for a separate Olympics or limited by way of number of teams, number of events.  Or maybe financing needs to be examined.  We do not want to create barriers for small countries, but need to find some way to get participating nations (at least those with a reasonable level of financial resources) to contribute to the expenses.  Perhaps an incentive might be to share in the revenues.  A model set by other sports offers another solution.  World Cup soccer was split between Japan and Korea and more recently World Cup cricket between Australia and New Zealand.  Political decisions could be made and it must be acknowledged that at some point the Olympics is in danger of being more circus than the ultimate athletic festival.

It is striking that there are actually a few men taking part in synchronized skating.  A potential problem is that men bring a more muscular dynamic to the sport.  At present there are no restrictions or regulations regarding a gender mix.  They could have all female or all male teams as in many other sports or they could have some sort of restriction.  At this stage each participating nation might have a different mix of men willing and able to improve the overall excellence of a team.  In any case it is a delicate balancing act dependent on available athletes.  In this modern age it is wonderful that gender offers fewer restrictions to what a human can achieve and contribute.  My involvement with horses has made me aware that at the Olympic level men and women compete equally in equestrian disciplines.  Men may be stronger, but women are often able to emerge victorious with other skills.

Another concern is that there are too many complaints about judging.  Over the years there have been political manoeuvrings and often just incompetence in a variety of other sports.  I noticed in the recent weekend that the crowd did not always agree with the judges, but that too exerts more political pressure.  Syncronized skating adopted criteria to be more objective.  A few years ago I went up a few steps towards being a swimming judge and can appreciate a lot of thought (and practice) goes into the decisions.  There will always be doubt and it must be admitted that a different set of objective judges might well come to a different decision.

One element common between synchronized swimming and synchronized skating is costumes and makeup.  For those who want to win, details matter and it probably is true there is a at subconscious preference for one combination of costume and makeup over another.  It goes back to faith in judgement.  But it is also is part of artistic impression and possibly lets crowd preferences have a subtle influence.  Personally it just adds to the enjoyment, but also the expense.

Some elitists feel skating along with other Olympic sports are more artistic than athletic.  Art and sports do seem to have a different focus, but they also overlap.  One of the joys of being a spectator is the beauty (or aesthetics) of athletes.  Michael Jordan is one of my favourites not just because of his points, or his victories but because of how he did them.  Teamwork is also something of beauty in that often that the result can be more than the sum of the elements.

Synchronized skating demands strength, speed and skill.  In addition to the individual demands are the demands of co-ordinating 16 athletes.  We love the artistic impression, but everyone should acknowledge that athletic skill is absolutely essential.

All sports depend on a grassroots support in order that a few can reach the highest levels of excellence.  Those at the bottom benefit from the physical exercise, building confidence and social skills.  They also form a base of spectators who can appreciate what it takes to excel.  A lot of attention is focused on the figure skating singles and at some point some drop out because they do not have the resources (talent, time, money) to keep at it.  Broadening the base so more people can meaningfully participate means more people can benefit and appreciate excellence. 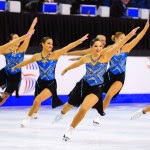 Synchronized skating, first labeled precision skating was formed by Dr  Richard Porter who formed a group called the Hockettes to perform between intermissions of the University of Michigan Wolverine hockey games.  It grew from there with the first international competition between Canadian and American teams n 1976.  Sweden and Finland rose to international standards quickly each winning a number of international championships.  Today there are 22 nations participating on 5 continents and is growing in participants.  It truly is not only a crowd pleaser, but a challenging participation sport requiring speed, strength, skill and discipline.

The original Olympics was also a cultural affair with sculpture and poetry being integral.  The Olympics with all its faults still commands international respect as a goal for excellence.  Synchronized skating can only add to the festival.

It was a wonderful show with a local group, Nexxice from Burlington winning, last year's champions from Finland finishing a very close second and Russia making a big breakthrough for bronze.
Posted by John F Davidson at 2:23 PM