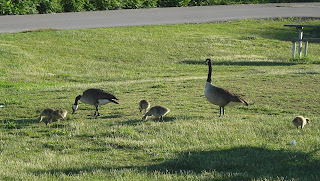 This post is inspiredly by a column in today's Spectator by Dante Ryel who captured and connected a lot of my themes with his own perspective.

Canada has one big asset, the Tar Sands that at one time seemed like it might be the salvation of mankind.   That was a long time ago, but our Prime Minister, Stephen Harper is tied to it.  There are several decades worth of oil buried there that at one time seemed not only could be sold to a desperate world, but at a huge profit for Canada.

Dante has pointed out two major concerns.  The one is climate change which most of the world is acknowledging, but a powerful section is denying.  Hopefully those who are willing to do something about it will overwhelm the ones wanting to cling to their fossil fuel empire.  The other concern is that when the price of oil is high the Canadian dollar is also high and that handicaps us from developing our manufacturing and diversifying our economy.  Canada has been too dependent on the oil industry.  In fact the Canadian government based its budget on the assumption of continuing price increases and demand.

For many years the Canadian dollar was well below the American dollar and that helped generate manufacturing jobs.  When the oil sands started booming our dollar caught up and surpassed the American dollar and there seemed to be a fairly strong correlation between the price of oil and the Canadian dollar.  When visiting other countries it was a pleasant surprise that our Canadian dollar would buy more than it used to.  With the price of oil declining that is reversing and may help manufacturing, but a little difficult to predict.

The Saudis are said to keep up production so that high priced alternatives such as the tar sands and fracking plus renewables will slow down.  Some speculate maybe they want the oil exporters Russia and Iran to suffer.  The price at the gas pump is still below previous levels a few months ago and consumption is up.  Dante suggests an alternative strategy; maybe the Saudis are liquidating their assets while they can.  When oil is replaced there will not be much profit in it.

The Saudis recognize that oil is a finite resource and have been using some of their profits for other investments.  Americans are suspicious of the Iranians wanting nuclear energy, but maybe they also realize there is a finite amount of oil and they need to find alternatives or at least be able to export to an oil hungry world.

It is also pointed out that oil wealth tends to work against democracy.  One of my favourite examples has been when the Conservatives under Harper cut the $2 per vote subsidy for political parties.  This gives less incentive to vote for third parties and encourages strategic voting or not voting at all.  Another example has been muzzling scientists here in Canada while they are ridiculed by many Americans who wish to deny climate change.

Another one of my favourite themes has been our voting system that favours those who can split the vote in order to win with less than 40% of the popular vote.  Before we woke up to climate change, Canadians were aware of the dangers of pollution, but somehow those who support our fossil fuel corporations seem to hold onto power.

With low price on gas, consumption will increase for awhile and likely some alternatives will be put on hold.  But the price of solar and wind energy is coming down and will be seen by more and more people as a logical alternative.

It may be awhile before our elections are handled proportionately, but more Canadians need to realize we are being controlled by those beholden to the oil conglomerates.  The Conservatives were very clever to merge two divisions of their party a few years back while those opposed to their policies split the vote and allow the Conservatives to take power and set the rules.

While Stephen Harper clings to an oil alliance, Canada is missing opportunities to diversify which are being picked up by others who more realistically see the future.
Posted by John F Davidson at 2:23 PM