Lincoln Chafee has an interesting proposal for a metric future 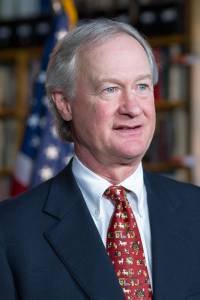 How does a marginal candidate get more attention?  How do they transform their unique resources into something people can understand.  Lincoln Chaffee came up with advocating the metric system.

A little background.  One of his main assets is that he was one of the few Senators to vote against the invasion of Iraq unlike Hilary Clinton.  Although she has disavowed her vote it really does point out that she has a tendency to make a political vote, rather than a stronger moral one.  Lincoln is very unique in that he was a Republican at the time and it took more courage to go against a party leader that said "you are either with us or against us."

It is part of his campaign to "wage peace."  He points out that America has a credibility problem partly to do with the Iraq War and that metric conversion would be one step to improve international reputation.  Most candidate are trying to project a "unilateralist" role for the United States.  Many politicians find themselves restricted by the strong notion that United States is exceptional and does not need to follow the world.  Lincoln seems to have the idea that in many ways United States would do better by better blending in.

Metric is internationally normal.  The old imperial system used by Amercians actually causes engineering adjustments for all countries.  It is easier for everyone, because the basis is 10, a number most can count on their fingers.   The globe, except for Liberia and Myanmar already trades and researches in metric, so everything involving the rest of the world will go smoother, i.e. be more understandable and economical in the long run.

In earlier blog on this subject I commented on basketball.  The international standard was adapted from the height of the first peach basket which was approximately 10 feet--it was just a convenient place to place the basket on an overhead running track.  It was not exact until someone decided to standardize it.  The International authority has adjusted to 3.05 metres which might not be to the same exact millimetre as 10 feet, but in reality basketball players adjust their shots with every hoop.  Check my earlier post, http://www.therealjohndavidson.com/2013/04/the-metric-system-needs-to-be-more.html

The Olympics is the biggest international event.  It is metric and Americans have accepted 100 metres, 200 metres, etc and trained with those exact distances in mind.   The NFL football may make an adjustment and it would be political.  An example would be the Ontario speed limit on controlled access highways went from 60 miles per hour to 61+ mph as that happens to be where 100 kilometres per hour converts.  I can see someone would round it up to make it better for defence and others would shorten downward to encourage more offensive excitement.

Of course a lack of exceptionalism will be thrown at Chafee and it is possible ridicule will shunt him to the side,   Thomas Jefferson advocated for metric.  Gerald Ford, a Republican  signed a bill to expand use of metric, but it ended up being voluntary.  I hope the voting masses consider the back story--US can increase its credibility, fit in the world better and actually make it easier to measure things

A few campaigns ago when the price of gas went up, the Democrats under Obama came up with the idea of how to lower the price of gas with a tire gauge.  It was ridiculed, but in fact it was  a very practical suggestion--lower the demand for gas (by being more efficient) and the price will come down.  Unfortunately the proof came with heavy unemployment.

There are a lot of issues in the election and ultimately the voters will decide on a package deal.  Right now Hilary has a commanding lead and a lot of resources to go all the way.  Bernie Sanders has an interesting package that will draw attention.  Perhaps the two men, plus Martin O'Malley can have their good ideas blended in the Democrat campaign and even force the Republicans to eventually accept the merits.
Posted by John F Davidson at 4:31 AM