SHONALI BOSE DOES FILMS WITH IMPACT 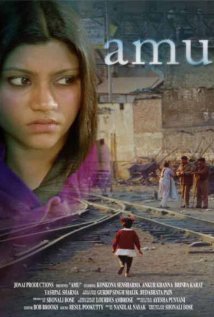 When the talk is about Bollywood most people think about a certain style but the term can be stretched to include movies from India with a different style.  The popular Bollywood style is just that--popular but there are other movies that are well worth viewing.  To do something with limited commercial potential one needs to jump through a lot of hoops

"Amu" was just something I stumbled over.  The bonus features were a gold mine of information and understanding, but the movie stands on its own as both enjoyable and instructional.

History provides a source for movies, but sometimes the authorities are too sensitive for some types of movies that hit too close to home.  The riots after the assassination  of Indira Gandhi by two Sikh guards in 1984 in Delhi aroused a lot of emotion.  Not just outraged religious foes but supported by police and government officials.  Later government basically wanted to bury it.  Secrecy about the real content of the movie was maintained until the release.

Most of the dialogue is in English, first because main protagonist was raised in America and the adopted family is upper middle class and speaks English regularly.  There are subtitles when Hindi and Punjabi actors speak.


It is obvious movies cost money and if the general consensus is that the idea has limited popular support it is difficult to finance.  Shonali Bose remarked that it is a lot easier if you can get a bankable star, like Shah Rukh Khan.  A lot of time was spent on attracting investors and she was fortunate to have a few contacts.  There was always a concern about controlling expenses, but reality is not always co-operative.

There is a scene where a young boy is seen dancing to a Bollywood tune.  Sonali wanted to include something like that to illustrate what is popular with the masses.  A young boy named Salman was selected as being the best dancer and he chose the song.  Later it turned out to be an expensive choice for video rights.

Another financial stress was with a scene where they wanted to illustrate that locals had to pump water when in fact there was a severe water restrictions and they ended up bringing in a water tank (I believe surplus was given to locals).

One beautiful scene was at the Gurdwara Bangla Sahib, a Sikh temple where even outside it is required to cover the head.

Censorship can be an issue, especially with some delicate history.  They were asked to cut out some key lines "not just the ....right to the top"  The censors wanted to keep this line from children although there was no sex and little violence.  When set to play on Indian tv they were told they would have to cut some words, but at the time of the DVD they refused to do so.  The concern was that the riots were not just the result of religious bigotry, but had sanction from the government.  The forbidden line was shown in my version.

In fact Shonali was anxious to avoid impression that religious tensions solely accounted for riots and showed scenes where Hindus hid their Sikh friends and neighbours.

The title is not explained until near the end and it is a bit of a shock as the main protagonist becomes aware of her own involvement.

Editing makes for some difficult choices.  The movie was to start in Los Angeles to demonstrate relationship between mother and daughter and the scenes added to the production costs.  Looking at the deleted scenes it seems many were cut to shorten the length.  Some scenes were shifted from their intended spot because they conveyed more meaning elsewhere.

There is some sarcasm between the American protagonist and the local Indians each party assumes the other doesn't get it.  The American retort to her future Indian lover is mocking his involvement with a Shakespeare play (a British import).

Kokona Sen Sharma was chosen to play the protagonist and is a well respected and Indian born actress over the original preference for an Indian actress with American experience.   She was a good choice for the lead, but not a big draw by herself.  I had watched her in "Mr and Mrs Iver" and especially remember her in  "Life in a Metro" shouting on roof top with Irrfan Khan.

Plot reminds me of "The True Story" set in Argentina that touched on children adoptions that were politically connected.  And of "Incendies" where the two main protagonists gradually learn their origin.  Another reminder was with "Walk on Water" where Nazi grandchildren interacted with Israelis.  An epic movie about human adjustments to tragedy.  The endings of these movies were more than just a surprise, more of a shock. 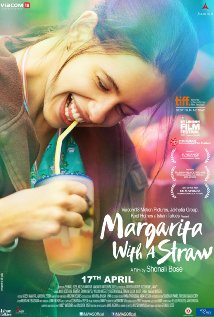 The idea for "Marguerita with a Straw" came from a birthday celebration of a cousin of Shonali who said all she wanted for her 40th birthday was sex.  Cerebral Palsy made that a difficult proposition.  That remark stuck with Shonali and developed into an idea. Sex is not the only focus, but it is critical.  "Normal" people feel it is at least a possibility, but handicapped people feel normal sex is impossible, partly because they feel repulsive and partly because society finds it incomprehensible

Kalki Koechlin, known for difficult roles played Laila, a young woman with cerebral palsy.  In other roles she has seemed more mature, but this role was for a young woman in her mid twenties.  Very well done.  Revathy played her mother trying to protect her daughter, yet also trying to understand her.  This was the second movie I had noticed Revathy.  She had a key role in "2 States" as another mother trying to accept her daughter's choice.  Sayani Gupta  played a blind and gay Pakistani girl who loves the protagonist and is very believable.  An early love interest is Tenzin Dalha, a Tibetan living in India and in the movie a band leader who sings a song written in Assamese by Laila.  Again the movie is mostly English with a good portion located in New York.

Bisexuality is portrayed tastefully.   One factor is that the protagonist is accused by at least two characters of seeking sexual relations to prove her normalcy.  Kalki's character Laila is going through an identity crisis grasping at what feels is right at the time.  The viewer will marvel at her lust for life.

Censorship apparently was a minor issue.  Although censor were accepting of much of the sex scenes they apparently were concerned over a women giving the finger as a gesture of displeasure.  They seemed to think it too disrespectful.  My version showed it and it fitted right in.

As in "Amu" they ran into a copyright concern as they had wanted Sayani Gupta to hum a popular Bollywood song as a way of linking her Indian culture, but learned even that would require a payment so decided to delete from the movie.

Aamir Khan was an active supporter of at least two of Shonali's films.   To me that is a sign of quality.

Shonali Bose married Dr Bedabrata Pain who she met at UCLA.  He had been a scientist with NASA, retiring from them in 2008 with 87 patents.  He was an executive producer for "Amu" and later co-wrote "Chittagong" using some technology he invented.  They had two sons, one of whom died in a freak accident.  It saddened me to hear they are now separated.  He was integral to "Amu."
P.S.  Since this post was written,Shonali has put out another masterpiece which you can read about here:  http://www.therealjohndavidson.com/2019/12/the-sky-is-pink-my-top-movie-for-2019.html
Posted by John F Davidson at 4:52 PM