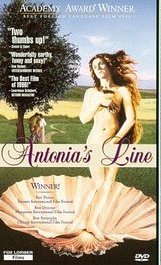 "Antonia's Line" (just"Antonia" in the original Dutch) won the Oscar as best foreign film of 1995 and a lot of other awards including a People's Choice award at TIFF.  It is well worth a view for its quality and uniqueness.  Dutch movies aren't so easily accessible as other foreign films, but they do go for quality.

Just as you are getting settled in your seat you will quickly realize this is a woman centric movie.  Men are not neglected, but play a secondary role.  There are a large number of characters that you will get to know in some ways better than most large ensembles.  The main character Antonia starts the movie proclaiming her death is today and summons her great grand-daughter who she had promised she would remember at this time.  Then the movie goes over her life starting with her arrival with her daughter Danielle back to her home where her mother is about to die.

Danielle has quite the imagination and we witness her fanciful distortions of reality.  We are soon introduced to some characters.  Mentally challenged people, particularly one known as Loopy Lips are sympathetically brought to our attention as Antonia treats everyone as humans.  Deedee is shown to us as a rape victim.  Antonia attacks the rapist and later forces him out of town.  As the narrator points out Loopy Lips and Deedee find each other to their mutual enjoyment.

An old moody man, Crooked Finger over the course of the movie becomes a mentor for a a few generations of women.  He is always quoting Schopenhauer and one remembered line was that "it is better never to be born."  He is one of many that discuss their philosophy of death.  Nevertheless he is beloved.

Sex is celebrated in this movie.  Although there are two rapes shown, mostly sex is a joyous event.  When Danielle decides she would like to become pregnant her mother takes her to a big city while they check out possible males.  They find one from a pregnant  woman in a home for unwed mothers.  Danielle obviously enjoys the sex, but cuts off a relationship.  Later the resulting daughter turns out to be a mathematical genius and Danielle has a joyous lesbian relationship with the math tutor.  The woman who brought the sperm donor into the picture eventually ends up at the village and has a love affair with the local priest who gave up his religious position.  All the sexually active couples (at least five couples by my count)are shown in a montage with celebratory music.

Marleen Gorris directed and wrote the script.  By some research and a comment from the special features Marleen's background and philosophy unsurprisingly is of feminism.  According to some write-ups some of her earlier films were guilty of misandry, one good example being "The Lost Island" (1990). With "Antonia's Line" she struck a more practical chord by featuring strong women.  Afterwards she has directed English language films including "The Luzhin Defence" (2000) and "Within the Whirlwind" (2009) both featuring Emily Watson as a strong female character.  Not seen either of these two films.

Willeke Van Ammelrooy played the lead, Antonia as a very strong woman with a love of life.  She had won 3 Dutch national awards for best actress.  I had seen her in "Bride Flight," (2008) and surprisingly in a Hollywood film, "The Lake House" (2006).

Els Dotterman played the daughter Danielle with quite a range of emotions.

Jan Decleir played a widower with five boys who patiently courted Antonia and eventually won her love.   Two years after this film he played a lead role in "Character" which won another best foreign film Oscar.

This movie is the sort that make me glad I am not hung up over subtitles.  It is well worth the effort.
For more on Dutch movies:  http://www.therealjohndavidson.com/2014/11/dutch-movies-are-hidden-gems.html
Posted by John F Davidson at 8:06 PM