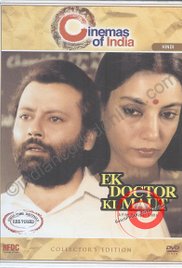 This 1990 Bollywood movie is about a workaholic.  Actually he is driven to do research as he feels that is more important, but needs a government hospital job to make ends meet.  His wife is exasperated by his long hours and inattention to her but sticks by him.

To do his experiments Dr Roy found a way to infect brown mice with leprosy and then using studies by a German Jew who died in the Holocaust he developed a cure.  The government accuses him of shoddy research and not going through proper channels.  To stop his efforts he is transferred to a small rural village where the medical demands use up his time and energy and he loses many of the indispensable resources needed for his research.   His wife stays at their original home, except for the weekends so she can care for the animals and get him books.  His colleagues view him as a temperamental man, stirring up trouble.  Because by accident he discovered a side effect involving female fertility, gynaecologists ganged up on him.

In 1990 animal rights were not as big an issue as it has become.  Near the end when his work is not credited he kills the animals including a rhesus monkey as he feels they are suffering needlessly.

Jealousy underscores many of his moves.  Instead of supporting his efforts government officials refuse to give necessary financial aid to finish his research.  Eventually a school mate after a plea from his wife campaigns to get more attention, but even that runs into a wall.

The bureaucracy seems more concerned over protecting their status. bureaucrats, eventually while delayed and delayed he lost out to Americans who used the same source material and came to the same conclusions.

Dr Roy does attract attention of an American research company and is offered a job.  He accepts because he wants to work and the film ends with an airplane taking off.  The lesson here is that talent (and a strong work ethic) is valuable.  The countries who put up barriers will lose in the long run.

The movie was based on the experiences of Subhash Mukyopadhya, a medical doctor in Kolkata,(Calcutta) who was the second doctor to have an in vitro fertilization baby born in the world, but was treated almost as a criminal for not going through government bureaucracy.  A very few years later he committed suicide.  The English translation is "The Doctor Dies."

The film won a number of awards in India.  One that got my attention was from the Bengal Film Journalists awards.  The movie put a premium on the role of reporters getting out the truth.

Tapan Sinha, the director was a science graduate from the University of Calcutta and became a sound engineer for films.  Went to Britain for two years and came back to direct movies.  Most of his films were in Bengali, the dominant language around Calcutta, now known as Kolkutta.  He composed music for 12 movies and for "Ek Doctor Ki Maut" was the music director.   He also wrote the screenplay.

The music was written by Vanraj Bhatia.  the only other one of his movies I watched was "Pardes," starring Shah Rukh Khan.

Soumendu Roy was in charge of cinematography.  Watch for the ocean scene.  Had done "The 'Chess Players."

Subodh Roy had edited mostly Bengali movies.  This movie was his last film.

Pankaj Kapur in my limited experience played mostly dirty old man roles, however now I  better appreciate he played a variety of roles.   He opted for art movies.  Movies I have seen him in include "Roja," "Finding Fanny," and "Matru ki Biljee ka Mandola."  He is currently married to Supriya Pathak and from a previous marriage is father of Shahid Kapoor

Shabana Azmi had been considered one of the dominant female actors of 'Parallel Cinema' in the 1970' and 1980's  Married to Javed Akhtar, making her step mother to Farhan Akhtar (http://www.therealjohndavidson.com/2011/11/farhan-akhtar-young-man-on-rise-in.html) and Zoya.  Shabana's  father was an Urdu poet and her mother an actress--appeared in two films directed by Canadian Deepa Mehta, "Fire", a very controversial movie, banned in India after riots and "Midnight's Children."  Oher notable films include "Neerja" "The Chess Players," and "Matru ki Biljee ka Mandola."  She is excellent.

Irrfan Khan is better known to North Americans with such films as "The Namesake" "Slumdog Millionaire," "Life of Pi."  His "The Lunch Box" was popular at TIFF,  Also big in Bollywood with such as "Talvar," "Haider" and "Madaari," (http://www.therealjohndavidson.com/2017/02/madaari-open-movie-about-government.html).  He plays a journalist with science background who encourages the main protagonist.

The film is something of a lost gem.  It reminds us of the harmful effects of jealousy and of bureaucracy.
Posted by John F Davidson at 2:38 PM