LIFE AND DEATH POLITICS AS ENTERTAINMENT 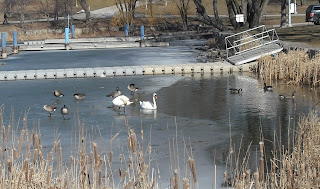 For many, politics is very boring.  Some will pay some attention during an election campaign and some think it is a waste of time.

A few of us don't think it is boring.  It is both about life and death and it does affect everyday life.  It does get buried in details.  What gets me excited is the power struggle between good and evil and the manipulation of minds.

Power is less based on merit, but more on marshaling social forces.  Decisions likewise often bear little resemblance to civic good. Manipulation is becoming more scientific--not only do they develop a message, but it is targeted. Under our present system it is not necessary to get 50%+1 so by accumulating niches that add up to enough to be first past the post you can win an election.

Money plays a big role, but surprisingly is not always decisive.  Part of my interest is similar to  basketball when the little guy overcomes the big guy.  Sometimes the less financed contender also overcomes the better financed, but usually the underdog is such for powerful logical reasons.

Most politicians say things they don't believe and reluctantly advocate for causes as part of a package. The best example is climate denialists, most of whom are well educated, but also know where their campaign funds come from.  They can bury their statements amongst other more appealing agendas.

Celebrity worshiping  "Dallas" glorified power manipulation and adultery.  Getting away with it was entertaining.  "House of Cards" drew a lot of attention, even Barrack Obama admired the machinations. Donald Trump's most famous line "You're fired" would devastate in person, but somehow seems tough. making us wish we had as much grit.

Not all political junkies share the same philosophy.  Some like the conservative agenda which boils down to the freedom of entrepreneurs.  They appreciate that social conservatism can be tied into the package and make victory possible.  check, http://www.therealjohndavidson.com/2016/10/social-conservatism-is-pivotal.html   Others like myself feel those in power are stacking the deck against everyone else and that leads to a lot of unhealthy responses.  We think the "good guy" would win if more people realized the merits of the cause.  On either side are some who feel compromise is necessary while others feel it is to be avoided.  There are different consequences at the end of all this political manoeuvrings.

Boring?  Definitely not!
Posted by John F Davidson at 7:48 AM