TV series from down under 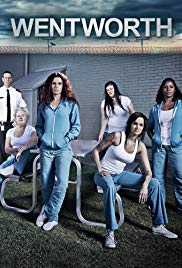 Humans spend a lot of time looking for amusement.  We are aware of things our predecessors had no knowledge of and many of us are seeking novelty.   I have watched movies from Australia and New Zealand, partly by accident and more so now that my son has moved to New Zealand.  My son has lived in New Zealand for a few years and having visited it twice we love it.  Not thought of television as I assumed most shows were inaccessible.

My daughter Heather got us watching "Wentworth" which was a regular dinner time event for us.  Set in a woman's prison in Australia the story line followed two interlocking power struggles--among the prisoners and among the staff.  Sex was part of the dynamics including extra marital, between and among staff and prisoners, a transgender and lesbianism.   A little racial tension with Aboriginal  (including one likable Samoan) and European cast.  I had seen the lead, Danielle Cormack in a New Zealand movie, "The Price of Milk."  Learned that one actress who slowly grew on me, Nicole Da Silva had moved onto another series, but saw not available on Netflix.

Browsing at the library, checked out what I thought an interesting movie from New Zealand and it turned out to be a television series.  Actually was upset at first because I have been trying to watch movies for blogging and didn't want to get tied up.  With some down time decided to give "800 Words" a shot and soon got hooked and later my wife enjoyed it as much.  I found the cast and stories interesting.  40 episodes passed quickly and enjoyably..

I saw a preview of "The Heart Guy" on "800 Words" and was surprised to learn available at my local library.  Part of the initial attraction was the presence of Nicole Da Silva who played a key character in "Wentworth" that showed her wide range of acting.  At first I may have misread, but understood she was to play the wife of the main character, but it turned out she was the ex girl friend and ended up marrying his brother.  Thought that would lead to infidelity, but it didn't amount to much except to illustrate the comical jealous rivalry of the two brothers.  Her character really deserves third or lower billing, but she is such a delight second billing seems appropriate.

What sustains series is unexpected plot developments, but not too stretched from reality. Relationships.   Both these two latter series are successful.  One of the techniques is character development of supporting cast and the many inter connections. 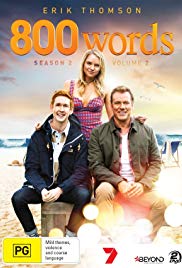 Watching 800 Words we  recognized a bit of the museum in Warkworth (one of the main locations) that we passed through twice on a road trip, once to look at Kauri trees and once to look at honey bees.   We also recognized  parts of Auckland notably the harbourfront.  Scenery plays a role as the main character likes surfing.  Never been to Sydney, but a few scenes make it seem attractive.

Sex is of interest to most viewers.  I reveal my age when I feel most comfortable with suggestive sex rather than explicit.  In the case of explicit there is not only an invasion of privacy, but also an attempt at sensationalism.  Like sex, violence is part of life, but we don't need it to be graphic.  Of course sometimes we need to see explicit or graphic in order to understand the situation, but most of the time we don't.

Erik Thomson plays George a widower with two teenagers in 800 Words.   George brought his kids from Australia to small town in New Zealand partly because he wanted to surf off the beach his parents took him to as a youngster.  Erik had roles in two movies I had seen, "The Boys are Back" and "The Black Balloon."  He always seems to be solving other people's problems, but has his own  He will be appearing in "The Luminaries" another mini series set in Australia.  I had enjoyed the unusual book, written by Eleanor Catton who won the 2013 Man Booker prize for it.

Melina Vidler plays the daughter, Shay and gets second billing.   In 2016 she won an award for most outstanding newcomer for this role.

Benson Jack Anthony plays the son, Arlo.  He provides a little wisdom from time to time, but eventually gets more involved in the various escapades normal to family mini series.  He had won an award  as best supporting actor for "High Life."

Rick Donald plays Woody, an unreliable handy man who provides comic relief.  It was difficult to reconcile a previous role as a slimy seducer in "Wentworth," which proves he is a better actor than I first thought.

Emma Leonard plays the love interest for Woody and a nudist beach lover who become school principle.  She has been active as a writer, director and producer.

Jonny Brugh plays an insecure comical real estate agent who sold George his house which wasn't the one George remembered from his childhood.  He appeared in "What we Do in the Shadows," a film I remember recognizing some of the scenery in Wellington, one of my favorite cities.

Anna Julienne played one of four female actresses to tempt the leading man,but with her own story.  She took a less likable role  in "Falling Inn Love," a fluffy, but enjoyable romance set in small town New Zealand.  She is in another mini series, "Mean Mums."

John Leith who played comic Constable Tom and Olivia Tennet who played Siouxsie were both in
"The Lord of the Rings:  the Twin Towers."  John will also be appearing in "The Luminaries" with Erik Thomson.

Rodger Corser who played Dr. Hugh Knight in "The Heart Guy." originally "Doctor Doctor," has been popular in Australian tv mini series and has also appeared in two American mini series.  He has also been a stage actor and played lead in "Rent" for both Melbourne and Sydney.

Nicole da Silva who played Hugh's sister in law, Charlie and former girl friend is the one that attracted us to "The Heart Guy"  Her role in "Wentworth" resulted in an award.  She also formed a partnership with co-actor  Danielle Cormack.

Ryan Johnson who played Hugh's brother, Matt Knight once wrote and starred in "One Step Closer to Home."  He is married to Tamara Asmar, script writer, including some episodes of "The Heart Guy."

Tina Bursill plays Hugh's mother.  She started in musicals and comedies, but has played several heavier roles.  One was in "Prisoners" an earlier version of "Wentworth.

Learned that there is fourth season just being released overseas.  Hope I get a chance to find out what my characters have moved on to.

The creators have some interesting backgrounds.  Ian Collie also produced "Saving Mr Banks."  Claudia Karvan as an actress played leads across from Guy Pearce and Hugh Jackman.  Tony McNamara is probably most famous for co-writing the script for Oscar winner "The Favourite."

A Facebook friend recommended "Big Little Lies" which I found engrossing.  Bought a copy as gift for my wife, Sharon and she liked it.  In fact we both read a number of her books and on Air New Zealand flight my wife watched the start of the series.  Re-set in the States it nevertheless as an Australian flavor that I intend to explore.
Posted by John F Davidson at 10:32 AM