PERANBU, TOP FILM OUT OF INDIA, 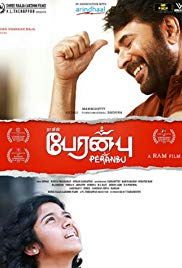 Peranbu was declared the top rated 2019 movie from India by IMDB, a Tamil movie beating out some very good Bollywood movies.  I was expecting some sort of action oriented movie or maybe a romance, but "Peranbu" is quite different.  The focus is on a spastic young girl and her father whose wife had left him.  To those used to watching glamorous actors there is an adjustment required.

The story is framed as a memoir written by the father and is split into 12 chapters.  Each chapter is titled as an aspect of nature for example ruthless, lawless, compassionate.  The father, Amudhavan  and his daughter, Paappa go through a series of mostly negative experiences, some of which seem to promise a breakthrough, but almost always ending in disappointment that the audience will feel.  The daughter Paappa is severely misshapen with her mouth open to one side and her tongue hanging out.  Her hands and her feet are bent at awkward angles.  She walks painfully and clumsily.

The father admitted that he had abandoned his daughter and taken a job in Dubai for 10 years.  His wife and daughter lived with his mother, brother and sister-in law all of whom rejected Paappa in one way or another.  We learn his wife left with another man and felt it was Amudhavan's turn to take care of the daughter.  We first encounter Paappa screaming and disrupting the household.  The first move is to a rural area and the most encouraging aspect is that Paappa perks up with a horse and with a wild bird.   Later they move back to Chennai, a very big city in southern India so she can relate more with other people.

One night he hears a woman being attacked and helps beat off the offender.  It turns out to be a prostitute, Meera who is also a transgender.  He becomes a protector and they develop a sort of relationship with ups and downs.

The viewer is always hopeful, but very often disappointed with other people who reject Paappa or try to take advantage of her.  We know even at the end that her physical problems will never end.  Without spoiling too much, at the end one is left with a good feeling with the main characters happier.

Ram, known by his mononym directed and wrote the script.  He has written and directed three other films, "Kattradhu Thamizh" (2007) ) and "Taramani" (2017) that both included Anjali in important roles and "Thanga Meengal" (2013) that had him playing the lead role with Sadhana as his daughter

Amundhavan Karuppia was a co-director who played a small role as well.  Anjana Krishnakumar was also listed as a co-director and had been a second unit director for "Taramani" and "Thana Meengal"  as well as writing some Malayalam dialogue.

The acting, not only of the four following, but of all the supporters is above average and adds to the reality.

Mammootty played Amudhavan as a loving, mature father.  He is best known for Malayalam films and 3 times won a national award for best actor and has over 400 acting credits.  He had trained and practiced as a lawyer and his demeanor is reflected in his acting.

Sandhana lives in Dubai where her mother operates a dance school.  She played Paappa and went to extraordinary contortions that make one cringe a bit, but before long everyone roots for her.  In reality dance is one of her favorite activities and ambitions.  She had played in "Thanga Meena" and won an award as best child actor.

Anjali (still another mononym not to be confused with Anjali Ameer below) played a supporting role as duplicitous housekeeper that made you at first like her, then hate her and then perhaps feel sorry for her.  She has mostly played in Tamil and Telegu roles with a few in Kannada.  She has been a prolific award winner.

Anjali Ameer plays a transgender prostitute.  She is a Malayal.  She is in reality transgender and will soon be appearing in a film about her life in which she will play both the male and female roles which will also include Mammootty.

Music was provided by Yuvan Shankar Raja who has 150 credits for film composing and has also been a playback singer.  There are about 4 unobtrusive songs and some very unique and enjoyable background music.  I had bought one of his songs from "Taramani" and it is one of my favorites.

The cinematography is handled by Theni Eswar. who had also done "Taramani."  My favorite sections were in the rural scenes which were beautifully shot.

The movie was very moving and I fear I have not done it justice.  Do not watch expecting something light and frothy, but expect to be emotionally involved.  Available on Prime.
Posted by John F Davidson at 6:37 PM