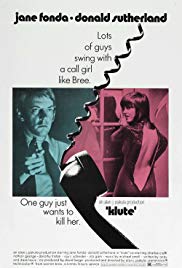 Struck by a comment that Alan J. Pakula was not a self promoter like many other Hollywood film people and preferred to concentrate on actually making high quality films.  A producer who directs and writes.

Born in 1928 to immigrant Jewish parents he had been expected to take over his father's printing business, but after graduating from Yale as drama major, Alan was more interested in theatre and persuaded his father to underwrite a movie.   He became an assistant in the cartoon department for Warner Brothers.

"Fear Strikes Out" (1957) was his first producer role and  formed a professional relationship with Robert Mulligan as director.  This movie was about Jimmy Piersall's battle with mental illness on his way to baseball stardom.

"To Kill a Mockingbird" (1962) again directed by Robert Mulligan who is listed as uncredited producer (with two others in addition to Pakula as the listed producer.  This film won 3 Oscars and both Mulligan as director and Pakula as producer were nominated.

The next two films "Love and the Proper Stranger" (1963) and"Baby The Rain Must Fall" 1965) both directed by Robert Mulligan and starred Steve McQueen who wanted to get into more serious acting roles.  "Inside Daisy Clover" (1965), "Up the Down Staircase," (1967 "Stalking Moon"1968) with Robert Mulligan directing.

With "Klute," (1971) as producer and director he helped Jane Fonda (who was reluctant to take the role) to win an Oscar.  This is the film that inspired me to do this blog.  "The Parallax View (1974), produced and directed a political thriller starring Warren Beatty. "All the President's Men" (1976) starring Robert Redford and Dustin Hoffman.  Alan was as director only, but received an Oscar nomination.

With "Sophie's Choice" (1982) as producer and director, but expanded to writing good enough to receive another Oscar nomination.   Starred Meryl Steep in one of her most memorable roles for which she won an Oscar. With "Presumed Innocent" (1990) was director/writer only based on a Scott Turlow novel of a courtroom drama.  A few years later wrote, produced and directed "The Pelican Brief" (1993) another political thriller from a John Grisham novel.  It showed an early Julia Roberts and Denzel Washington.  Excellent use of building suspense.  His last film as director only was "The Devil's Own" (1998) with Brad Pitt and Harrison Ford.

He married twice, first to Hope Lange who divorced and two years later married Hannah Cohn.  He had no children, but helped raise step children.

He died in a flukey accident in 1998.   Driving on expressway a pipe went through his car window after another car caused pipe to move.

For a fuller blog on what producers contribute to films check:  http://www.therealjohndavidson.com/2016/08/movie-producers-what-do-they-do.html

As usual I have bolded movies I have actually seen and which helped me gain a better appreciation.
Posted by John F Davidson at 10:10 AM