According to author Michael McCreary us neurotypicals have probably met more ASD people than we realize.  ASD stands for Autisim Spectrum Disorder and includes a wide range of functioning and not so functional people.  He also warns that reading his book may make us think that as we share some characteristics of Autistic people we might be on the spectrum ourselves.  He reassures us that all people share overlapping characteristics and we need not fear.  By the way neurotypicals are what "they" call us "normal" people.

For me the value of the book lies in trying to understand a significant number of my fellow humans.  From what seems like an unusual perspective, that of a stand up comedian Michael does a good job.

Earlier this year we were steered to watch three full seasons of "Atypical" which in one sense provided a lot of laughs, but also hit deeper more than a few times.  It attempts to explain how and why the main character responds to the world as he finds it.  Also it boosted my understanding of the people who live with Autistics including family, the general public, work and school mates.

Michael was the middle child and was not diagnosed until after his younger brother with a less functioning disorder had been diagnosed.   His parents were supportive.  He went to school in Orangeville where he was given opportunity to be involved with school plays.  At one time participated in a program at Theatre Orangeville Young Company. 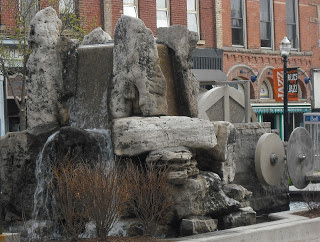 While a student Michael mentioned he once wanted to put a display in the middle of the main street in Orangeville and acknowledged that there was something already impressive in the middle of the street.  Many years ago when traveling as a salesman I was struck by this display to the left which Michael described.


At age 13 he took part in a program run by a standup comedian, Dave Granirer called "Stand up for Mental Health."  His parents encouraged these type of opportunities and Michael sparked.  Over time he gained more opportunities and I suspect he was identified as someone who could represent what Autistics could achieve if given a chance.  He took a course at Second City Training Centre.  At first he was given opportunities to perform in front of those involved with autistics, who might be assumed to sympathetic, but eventually he was given a chance to perform in mainstream audiences, including Toronto's Massey Hall.

As he writes this book he is 22 and recognizes that might seem a bit arrogant.  I would add that he does everyone a service not only by making us laugh, but also to understand a little bit better.  A few years ago (2014) I read "The Spark" about a child who for many years was non communicative, but later turned out to be a genius.  Read more:  http://www.therealjohndavidson.com/2014/01/the-spark.html

Michael was careful to point out that it is a common myth that autistics are math whizzes, but many are like him and not good at math at all.  Another myth was that autistics are incapable of lying.  While it is true they are very literal in their thinking and that lands them in awkward situations, when they are unable to explain what they are thinking a lie sometimes seems the only way.

Autistics seem to attract those who make fun of them and bullies.  Michael did not know when he was being made fun of for a long time, but gradually understood.  He also is able to observe how autistics can annoy neurotypicals and has advice to us on how to handle it.  We also can benefit from understanding some of their habits such as what he calls "stimming."  Stimming is often expressed as repetitive actions such as rocking, spinning objects or flapping hands.  Often it their way of handling over stimulation while conversely sometimes it is used to get stimulated.  The action is not the problem, but may indicate an underlying concern.

As he became more involved in performing he encountered some interesting people.  As a 7 year old helping his mother at a trade show booth he demonstrated for Temple Grandin who ended up buying some items.  Ten years later, again at the Toronto Convention Centre he performed before Temple made her presentation and his mother arranged for a photo of the two together.  Still three years later in Whitehorse, Yukon he was again set up as an opening act for Temple and this time he inter acted.  For the morning performance he was criticized by Temple for his sloppy clothes, but in the evening he changed to something else and commented it was because of her.  She liked his choice and they had a more serious conversation where she gave him some friendly advice, critiqued a Batman movie and sang the song from the tv series.  Temple Grandin is a big deal to me, but I only heard of her when I sold an ad to a feed store (not too far from Orangeville) that was sponsoring her at a show.  Out of curiosity I watched the movie,  "Temple Grandin" (2010) that is also recommended by Michael and saw that Temple is still another example of an autistic that has contributed significantly to neurotypical society.

From one of his performances Michael attracted the attention of Chris Hadfield's son who organized another project.  Through this experience Michael met Chris Hadfield, the astronaut and through him met author Neil Gaiman.

The book is very easy to read.  I got it through an e book process at my local library.  Your understanding of another slice of mankind will grow.

Near the title page the book is dedicated to Matty and I wondered who he was.  It was his younger brother who had a much more difficult time.  Michael in fact did not relate to him very well until after hearing a comment that if you want to get along with an autistic you should seek common ground.  For Michael it turned out to be trampolining that was the breakthrough.  Michael suffered a gran mal seizure and drowned as Michael was writing his memoir.

To end this review the last words from the Acknowledgements:  "Finally thanks to anyone I've ever had an awkward exchange with.  Without you I would not have had enough material to meet the quota."
Posted by John F Davidson at 8:44 AM