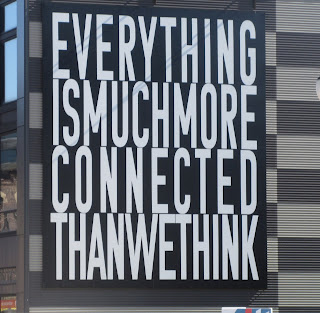 After awhile you realize that there is more to life than spending (almost) all your time at home.  I spend a lot of time thinking about places I have visited to make a living and to live and am grateful I have those memories.  My adopted home town has a lot to offer and walking around my appreciation for it has been enriching.

To the left is a large wall design on James St N. that is my basic concept.

We are told to maintain a 2 metre distance from other people which can be difficult.  I have done some shopping where we are lined up about 2 metres apart, but we all are looking for many of the same items.  Retailers need to protect themselves while trying to retain some cash flow and have been adjusting procedures for what they offer.  Traffic, both vehicular and pedestrian is much lighter than normal.   I notice more jaywalking and walking against red lights and I pleed guilty.  Most people respect others and will cross to the other side of the street or wait til someone has cleared an intersection or narrow stretch.   The video link below was  first brought to my attention by Cameron Kroetsch who also presented a petition to close some streets to vehicles to make it easier.  for pedestrians to maintain distancing.  He used example of Hamilton's Super Crawl that established protocols for redirecting traffice.  Check out the video that hi-lites the difficulty of maintaining 2 metres.
https://www.youtube.com/watch?v=aXxfKX4tRdw&feature=youtu.be 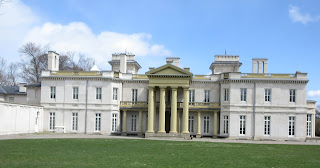 Dundurn Castle was one of the first things I would see when coming from work after taking the York cutoff.  Built for Sir Alan MacNab who at one time was Lieutenant-Governor and helped put down the Rebellion of 1837.  My sympathies were with the rebels.  He was behind roads improvements including access to the mountain. 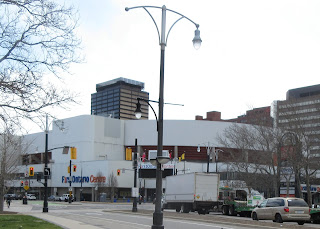 After visitors to Hamilton could see Copps Coliseum.  I call it "Copps" as he is the one responsible for getting it built in Hamilton.  I remember Victor Copps because he once approached me at a literary celebration to give me a lead for a research project that resulted in me getting a press pass to the Olympic qualifying basketball tournament held at McMaster University.  Unfortunately cities can only stretch tax dollars so far. 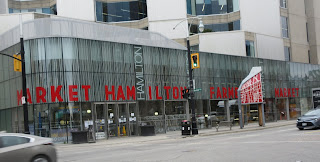 Just next to Copps is the Hamilton Farmer's Market (one of a few others) attached to Jackson Square.  It has been a regular stop each week.

Donald Trump is becoming nauseating for me.  Why has nobody taken steps to remove him from office?  He is a threat to the nation and it should have been apparent for years.  He has become an obsession for rational people (like me?) and a king for others. 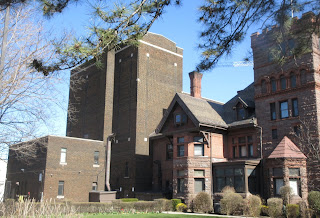 This building is now known as the Scottish Rite Masonic Centre, but long ago was known as the Tuckett Mansion.  George Tuckett had been mayor of Hamilton.  He made a fortune in tobacco and was even able during the American Civil War to bring tobacco to the north and Canada because of his citizenship. 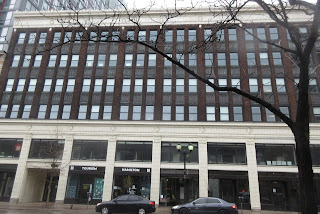 A few years back artists in Toronto started to notice that not only were rents a lot cheaper in Hamilton, but that old buildings gave a bit of atmosphere.  You can see Lister Block (my daughter has a desk there).   Enough artists congregated on James St. N. that someone had the bright idea to organize a monthly art craw that later spun off the Super Crawl once a year that closed several blocks for pedestrians and has attracted well over 100,000 visitors.

Bank of Montreal Building next to the Pigott Building.

At the corner of Mulberry and James is a coffee shop and numerous art studios.

The building on the right used to be owned by the Orange Lodge who left some symbolic frescoes of King Billy.  Since then the Vasco da Gama Football Club took over and it also houses some artists. 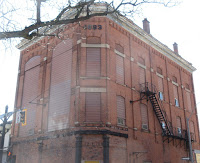 A building on King St E. that used to house Forbidden City, Chinese restaurant.  Built in 1893. 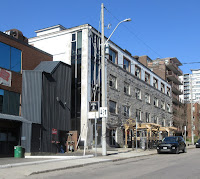 The building to the left is One Duke St, just off James St S.  I have worked for two different companies in that building and learned a secret.  see below. 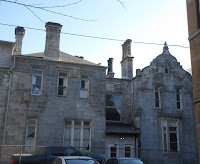 To the far left side you can barely see the top of a castle which is actually attached to One Duke St.  Recently I went to the next street over and took a photo of the rear side of the castle.


We all love to go to restaurants.  In my walks I pass by a number of restaurants.  Some are keeping alive with takeouts and deliveries.  We have had take-out about once a week for different local restaurants.  Here are a few of note.  Some I have been to and others I am fearful I may never get another chance. 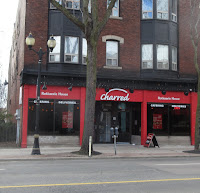 Trocadero Tavern was apparently once used for one of the Godfather movies. 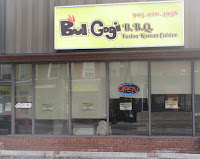 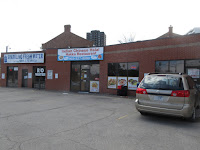 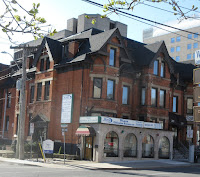 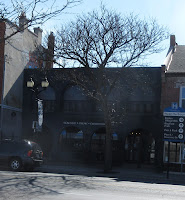 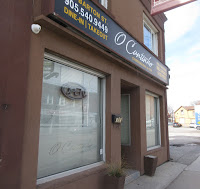 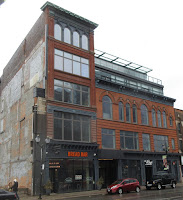 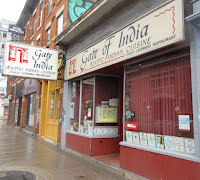 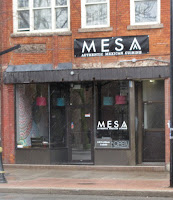 A Mexican restaurant that carries Halal was a favorite place to take my sister from Montreal. 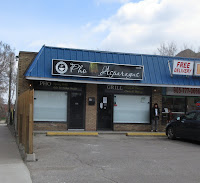 Across from the jail. 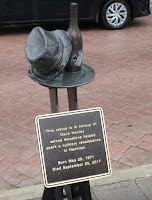 The plaque on the right honors Dave Hanley, a culinary leader and is across from the high end  restaurants on King William St 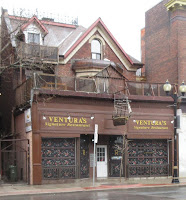 Once enjoyed a Fado Night at Ventura's.  Recently the owner decided to retire and sold to another restaurant, Rapscallions, but they haven't had a chance to set up just yet.

With the library closed I am renewed my interest in ebooks and the library has promoted some interesting choices.

Recently finished "Funny you don't look autistic" that not only boosted my understanding of autism, but as a Canadian story contained a few commonalities.  Read more:  http://www.therealjohndavidson.com/2020/04/funny-you-dont-look-autistic.html

They declared, "Moon Over Crusted Snow" as their Hamilton Reads selection for 2020 and made ebook copies readily available.  Read my review:  http://www.therealjohndavidson.com/2020/04/hamilton-reads-2020-moon-over-crusted.html

Links to other Covid-19 posts.

Nobody knows exactly how long the shutdown will last or what exactly the next steps are, so I will be looking for more things to fill my time and hopefully encounter things and experiences to enrich my life.  Spring is a time of hope.  I have many other photos and stories, but will save them for another post.
Posted by John F Davidson at 6:19 AM