COPING WITH THE COVID-19 SHUTDOWN 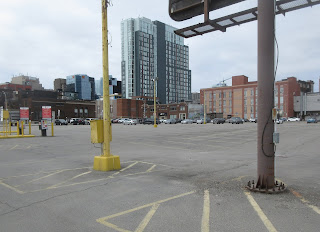 Only retired a few months and trying to establish a routine it all came to a screeching halt in late March.  My awareness about this new disruption started with distant news reports from China, then Europe and then parts of North America and even my home town of Hamilton, Ontario.  Restrictions started.   First I had to answer some questions at the local gym, take a squirt of sanitizer before being allowed to enter.  The next day cut off.  The library where hours most days had been spent was shut down.  Rapidly stores were closed our local shopping store instituted some restrictions and soon offered a special senior hour.  The Farmer's Market although open had many vendors vacant and traffic greatly reduced and I was urged not to visit.  Our bank tellers were closed off and I had been resisting their machines to ensure human employment, but that is the future.  The LCBO was considered essential, but a long line up (with spacing guidance enforced by security guards) made it take much longer than usual.  After a lull I had got back to volunteering at the Newcomer Centre at the library and that was soon cut out.

Already adjusting my routine from retirement many of the normal options were rapidly reduced.  Fall backs were blogging, watching Netflix, checking the news, playing with the cats, ranting about Donald Trump on social media, getting back to a long neglected jigsaw puzzle (which I won in a contest, but no picture to guide).  Walks were recommended and I decided to check out my neighborhood while avoiding getting too close to anyone.

Near the beginning I did go down to our Farmer's Market which is about a 1 kilometre walk.  Lots of restaurants were closed, some offering take out and/or delivery.  Most other businesses were closed with a note to protect employees and customers.  At the Farmer's Market many stalls were closed, but my regular ones were open and I bought my regular.  These people stand to lose a lot and I would rather support them than the big chains.  On my way home I decided to buy a box lunch (in reality 5 boxes) at Bul and Goggi which seemed a good deal.  I have been binging on a number of Korean tv series. 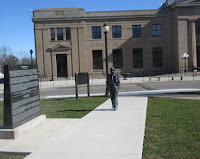 A popular life size statue in front of Liuna Station (often shown on tv shows).  Leonardo Sciassa was a famous Italian writer from the Sicilian town of Racamulto that has sent literally thousands of immigrants to Hamilton.


My wife was on a long planned Florida vacation with her 83 year old friend visiting her daughter and hoping to see spring training games.  Although Florida had a casual attitude towards Covid-19 my wife's group avoided crowds and eventually came home early and told she must abide by a 14 day self isolation.

That meant I was given some shopping and told to be careful.  On my most recent trip took advantage of senior hour starting at 7:00 am.  I heard announcements regarding distance and noticed there were plastic partitions for the cashiers.

This crisis coincides with spring and although we have had a mild winter  spring raises our hopes, but it is still a long way to the warmth of summer.  Two projects were of interest.  One is what I call a peace garden a few blocks away.  It has all been flattened with nothing yet planted.  What makes it unique is that it was started by a Chinese community group that allocated sections to different ethnic groups that all provided embedded ground stone  with a message in their original language.  The other project at Harbourfront Park is a corridor of Japanese cherry trees that were gifted to the city more than a decade ago.  Last year I watched the blooms, but anticipate they will be much better this year.

Two days later took a different route.  First to check on senior hours at our local shopping centre.  Went over to Beasley Park and noted there were no children at the swings.  Over on the skateboard section saw a man in an electric wheelchair going up and down and enjoying himself, sounding like his first time as there were no actual skateboarders. 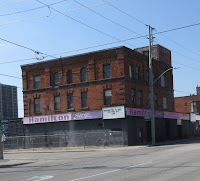 Hamilton Strip Club, before it was Hanrahan's has finally closed and I was surprised to learn that it started as a hotel and is considered historic.  It is due for renovations, but no dates settled.

Donald Trump is continuing to screw things up while he tries to manipulate events.  His ego is such that he doesn't realize that the best chance to revive the economy and possibly boost his election chances would be to solve the medical crisis.  As people die there are fewer consumers.  Voting in the U.S. (elsewhere I am sure) is an issue in itself as people will be reluctant to get in lines and poll workers will be fearful to serve them.  The Republicans realize that if mail voting is allowed the Democrats are more likely to win and so are resistant to any proposals to make voting easier.

Caught this fetching mural on a private house on one of my walks.


My daughter was part of group offering a phone in conference service for seniors and asked me to join in to beef up the participation.  One time was trivial pursuit and I managed to get a few.  Another was name that tune were I was the only one who got one tune, but struck out on many others. 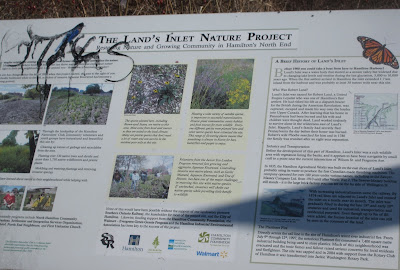 Less than two blocks from my house was the scene for a huge environmental disaster at Plastimet. on July 9, 1997.   I had watched the fire closeup with my 14 year old son at the time. Since then the area has been cleaned and turned into a park with a nature project at the adjacent Land' Inlet.  Reading the plaque learned that there used to be a stream connecting to Burlington Bay/Hamilton Harbour.

Hamilton was known primarily as a manufacturing centre and still has a lot of industrial plants.  A few blocks and easy walking distance is Burlington Street which has a number of industrial companies along with retailers/wholesalers that service them.  Now union workers have greatly declined, but Hamilton has shifted to a major medical and education centre.  My first visit to Hamilton when my father trucked a load at the other end of the street not far from the Skyway bridge.  I was not impressed.   http://www.therealjohndavidson.com/2013/09/hamilton-ontario-was-not-my-first-choice.html


Also on Burlington Street at the corner of Wentworth is a film studio that I once visited during Doors Open Hamilton.  A lot of tv shows have used its facilities.

It looks like there will be a longer period of adjustment.  I will keep learning new things and plan to share some of them with anyone willing to read my blog.