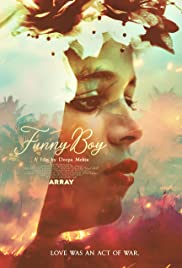 I never thought I would be touting a movie about a gay boy raised in Sri Lanka as one of my favorites for the year, but "Funny Boy" has a lot going for it.  One attention getting point is that it is the Canadian nomination for the Oscar international film category.  There are a lot of good films in that category and it is pointless to predict how far this film will go.  Regardless it is well worth the effort to watch.  CBC recently broadcast it without commercials.

First, let's deal with the gay part.  The title comes from family observations of Arjie, the protagonist when he was an 8 year old boy.  Very obviously he prefers girl things.  The opening example is a mock wedding among children where he portrays the bride (his face is initially hidden from our view).   When it comes time to kiss the bride we see he has on lipstick and one obnoxious child objects to the bride being a boy.   His parents call him "funny boy" in a concerned way and make attempts to steer him towards "boy" things, but he doesn't feel comfortable.  An aunt, Radha, returned from Canada recognizes that he is gay and encourages his "feminine" interests.

When he goes away to school he meets a kindred young man who happens to be Sinhalese and they soon realize they love each other, but for the most part have to hide their feelings.  Arjie's brother and sister are understanding but realize their parents aren't as understanding.  For me one of the most illuminating scenes is when the two boys are alone in a room and happily dancing to "Every Breath you Take" shown waist up and then covering themselves with blankets when they need to open doors to learn that violent riots are taking place nearby.  At the end of the movie when the family is at the Toronto Airport (in winter) the mother comments that now they are in Canada they are free slaves seeming to acknowledge that their son will be able to pursue who is really is.

There is another big source of tension and that is between the Tamils and Sinhalese.  The Tamils had been brought to what was then called Ceylon and they proved to be good at business and professions to such an extent the Sinhalese resented them and took steps to control them.  There are many minor encounters and references to Tamil Tigers that remind us of the tension.  The aunt who helps Arjie, falls in love with a Sinhalese and this is resisted by her parents who eventually force her to marry someone they picked.  Violence escalates and at one point they decide to flee to Canada.

So far my favorite movie seen this year is "Peranbu" (2019) and two other Tamil films are among my top movies for 2020.  "Funny Face" will rank up among the top films seen this year.   Although this is a movie about Tamils it should be of concern to Canadians as over 100,000 Tamils came to Canada.  I have become more impressed with Tamil film: Read more about my top film so far this year:  http://www.therealjohndavidson.com/2020/03/peranbu-top-film-out-of-india.html

There is lots to like about this film.  Start with the writing.  It is based on an award winning collection of short stories by Shayam Selvadurai who grew up gay in Sri Lanka before escaping to Canada.  He won the Lampa Literary Award and one for First novel authors.   He had worked on radio adaptation of one of his stories with Deepa Mehta.  After dealing with other screen writers, he gave up and decided to do it on his own.  He sought help from Deepa Mehta, a veteran screen writer, director and producer.  She has won numerous international awards with some of her outstanding films including "Fire" (1996) "Earth" (1998), "Water" (2005 also filmed in Sri Lanka), "Cooking with Stella" (2009) and "Midnight's Children" (2010).

Beautiful cinematography by Douglas Koch including natural scenery around Colombo, Sri Lanka and wrealthy old stately buildings where some of main characters lived.  Other films of his include "The Grand Seduction" (2013), "Through Black Spruce" (2018) and one for Deepa Mehta, "Bollywood/Hollywood" (2002).

The acting at all levels is very good.

Brandon Ingram was suggested by Shayam and he plays the older Arjie.   This is his first film after some 13 years in theatre.  He is openly gay in Sri Lanka where it is illegal.

Agam Darshi plays the progressive aunt Radha who has a short romance with Anil, a Sinhalese and then goes through with an arranged marriage.   She has been in numerous films and tv. shows in Canada and and the Unite States.  She has done some directing and producing and was a co-founder of the International South Asia Fim Festival.

Rehan Mudannayake who played lover to Arjie once had been an assistant casting for Metha's "Midnight's Children."  He has been a successful director of short films and founded Odyssey" that makes commercials, musical and corporate videos.  From Sri Lanka he studied at the University College in London.

On February 5, 2021 the Oscar committee narrows the international film category to 10.  From my very limited perspective it seems very possible it will make the final 10 that will get voted on by Academy members. It could be a rooting interest for Canadians.