A tear jerker from Turkey 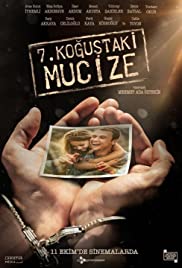 Trying to sort through my year end sorting of best films was disrupted by this almost last minute selection.   A  You tube video of the all time top Korean films made "Miracle in Cell No. 7"  (2013) one of the top ones.  Checking all my limited resources I learned there were at least four versions including a second one from Korea, plus one from the Philippines and another from Turkey, with all given above average ratings.  Didn't matter because only one was available on Netflix.  All of the reviews emphasized that you would shed some tears no matter how hard-hearted you are.

The plot is key to inducing tears, but most reviewers are reluctant to reveal too much of that and I suspect many may dismiss my outline.  We all have only so much time for a real tear-jerker, but this will do more than most.  A few years back I did a blog on sad movies and if you need to gauge my feelings on them check this out:  http://www.therealjohndavidson.com/2014/08/the-power-of-sad-movies.html

This movie "7 Kogustaki Mucize" (2019) which can be found on IMDB or Netflix as "Miracle in Cell No. 7" would top the list.  A tease of the plot might convince you of its uniqueness.  Before the title appears we see a mature woman in a rich setting listening to the news which is about the time of the Iraq invasion, but then mentions that finally Turkey has banned capital punishment and she picks up some sort of metal box and we wonder what significance it holds for her.  After the title we are introduced to a man who is bubbling with joy over picking up his daughter at a school.  His daughter's school mates all make fun of him and we soon realize the father is very simple minded.  You might not notice the teacher trying to quiet the unruly youngsters and steer them away from the father and daughter.  A few minutes are spent to demonstrate the close relationship of the parent and offspring and also a little more how the father is mocked.  Then the crux of the matter occurs when a class mate wanders off with the simple father and she accidentally falls, hitting her head on a rock and dies even after the simple father dives in the water and tries to save her.  The father of the dead girl turns out to be the military head of prison and he is very vindictive.  The simple father is quickly thrown in prison and beaten by guards and staff who see the man as a child killer.  The military leader forbids beating as he wants a swift execution.  You might think you can figure out the rest of the plot and you likely are partially right, but this really is unique and the story has a few twists.  Oh yes there is a miracle, not a fantasy, but  one that is big twist hard to imagine.

The plot can only carry you so far and if it is not believable can induce disgust.  All of the actors are very well including the six year old daughter who is precocious in a very nice way.  The scenery which is bleak in many scenes adds to the mood as does the unobtrusive background music.  The Turkish prison cell no. 7 contains about 8 or so prisoners with one designated to be a liaison with the staff.  They have a fair amount of freedom, except they cannot leave on their own.  One of the prisoners is a bit of a Muslim scholar and I suspect the Korean version had a Catholic surrogate lending some moral guidance.

The lead actor, Aras Bulut Iynemli carries the burden playing not only someone who seems joyous despite all the mockery and hatred that sometimes surrounds him, but also as perplexed man-child who does not understand why he is being mistreated.  I have enjoyed watching Turkish movies, but have never seen him before, but apparently he has not only won some awards, but acted in a variety of roles.

To me another key is the six year old daughter played by Nisa Sofiya Aksongur.  She reminds me of a niece my wife likes to babysit when she gets the chance.  She is bright and cheery and displays intelligence.  She does move the plot, basically for her persistent love of her father and her grandmother.  She had already appeared in several tv. episodes and has already gone on to more shows.

There are other key actors that make things move along.  One of the prisoners (Ilker Aksum) and the prison manager (Sarp Akkaya)  are both very good.  All of the supporting cast lend realism to the story.  Two writers helped to adapt the original script, Ozge Efendiglu and Kubilay Tat. The original Korean script was written by  Hwan-kyung Lee, Young-seok Kim and Hwang-seong Kim.  The director, Mehmet Ada Oztekin holds it altogether.

This is not the first Turkish movie to make an impression on me.  Several years ago was able to see a movie and read the book that was quite an education for me and encouraged me to watch other Turkish films.  Read about it:  http://www.therealjohndavidson.com/2011/05/turkish-delight-in-book-and-movie-form.html

In short ,if you are ready for a tear jerker this fits the bill, but your mood will be lifted way up at the end.