Cuba; After the Revolution 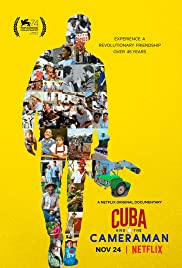 The American media tells us Cuba is a "police state" and the people are poor.  Four tourist trips for me plus watching "Cuba and the Camera Man" give a different perspective.

Few can deny that before the Revolution, American corporations and the Mafia were exploiting the people.  Many do deny that Cuba is a deserving country.  Cuba is viewed as oppressive.

"Cuba and the Cameraman" (2017) showed a variety of images spanning over 50 years covering many changes.  Jon Alpert had struck a relationship with Fidel Castro shortly after the Revolution and visited the island several times over the following decades.  He even accompanied Castro to a United Nations visit in New York City.  Anti Castro television coverage was shown to point out the opposition to his regime.

My four trips to Cuba were very enjoyable and a little educational.  As tourists inside a protected environment we saw little to criticize, but we did venture out from our Veradero resort into town and even to Havana on two of our trips.  Poverty was evident as were some historical architecture and some signs of modernization.  Old vehicles were a a bit of tourist attraction, but a necessity for those who could afford them.

We were conscious of a barter system.  One of our tour guides pointed out that the number one export was medical expertise.  At the time they were sending doctors to Venezuela in return for oil.  At the resort I remember we got some Argentinian wine as they had made some sort of cash free deal.  Tourists were critical to their economy and tipping was encouraged.  We were able to give out branded toothbrushes from my wife's boss and knitted wear from a friend.

One of our tour guides admitted that he had hated math and opted to learn English which gave him to opportunity to work in tourism.  He had  lived in Edmonton for awhile and pointed out Cubans hated the cold.  All the tour guides seemed well informed and gave us a Fidel Castro perspective on the politics.  As tourists we were well aware that Americans were friendly to and traded with China, Saudi Arabia and even Vietnam.

Politics is always a part of a Cuban discussion.  The Cuban diaspora in Florida was decisive in elections and both Democrats and Republicans were careful not to offend.   Many had been forced out of business and scared by "socialism."  I would like to ask many of the self righteous exiles how in fact they got the good things they were forced to give up.  Despite all sorts of economic challenges Cuba was able to offer free medical care, housing for all and extend education to boost their literacy rates to the highest in the Caribbean.  Their level of wealth looks dismal compared to United States and Canada, but perhaps we should be comparing them to other Caribbean nations.

On the other hand the film does point out things that are not easy to justify.  Castro at one point gathered  prisoners and mental health patients to leave for Florida.

On vacation we met Cubans with relatives in the U.S.A. and kept in touch with them.   We met one Cuban (from Brooklyn, New York)  while in Quebec who told us he had visited home.  He had married a Puerto Rican.

Some say Jon Alpert was naive, others biased and we can all agree limited.  Jon focused on some particular locals, three brothers in in a rural area and the some others in Havana that he repeatedly visited. They still lack many things we take for granted, but citizens were able to criticize.  Jon took his camera to a Tropicana performance which impressed my wife and I  One set of scenes was about one of the farmers he regularly had visited had had his larynx removed and we got to see a hole in his throat.  The doctor explained that had saved his life, but they could not afford a voice box.  Jon on a subsequent trip was able to bring one and have the same doctor insert it opening up communication.

For those who want to criticize Cuba they will find material.  There was a lot of poverty Jon captured with his camera.  Over the years one difference was that the same Cubans that had looked scrawny in the early years put on weight.  Private businesses were opening up.

Gabriela, a woman at work married a Cuban and brought him to Canada after about a year.  At the time had planned to bring over his daughter from a previous marriage when she turned 16.  Her husband was amazed at Canadian Tire.  He was able to find work.

My trips to Cuba were very enjoyable including lots of interesting things to see.  I didn't meet any politicians and I am sure there was a slant to what was presented.   What I remember most is the people.  They were helpful and anxious that we get the most of our vacation. Three of my trips were subjects of a blog with lots of photos and stories.  When United States under Obama was trying to open up I wrote my thoughts at the time.  If you get the chance I feel confident you would enjoy Cuba as well.

After one of my Cuban trips I was talking to a business contact in Houston and suddenly realized I might be offending him.   He was actually a Mexican citizen working in the States, but assured me that he and Mexicans loved Cuba..

an earlier blog on the political atmosphere:  http://www.therealjohndavidson.com/2014/12/obama-and-cuba.html