A Turkish Delight in book and movie form

Looking for something interesting to view I stumbled on "Bliss" in the Hamilton Library system. After some research (really just skimming) I reserved a DVD thinking at least I would get a perspective on movies from Turkey. When it actually came I wasn't initially very excited, but before too long I was hooked. I watched it a second time and started reading about it and the writer of the original novel. More recently I read the book.

It is common for movie goers to say the book is better than the movie and mostly I would agree. For this comparison I would say they are different with their own merits and demerits. 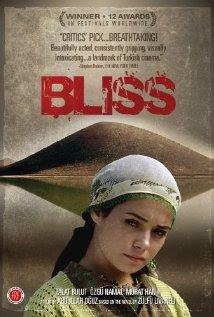 The key person in all this is the author Zulfu Livaneli. He had not crossed my radar, but he seems like a modern Renaissance man, deserving of wider recognition. Zulfu has written several books, and also screenplays, many of which have achieved international recognition. He leveraged his literary success into also directing successful movies. All that is interesting, but lots of writers can boast a similar resume. He is also a well regarded folk singer/musician who composes, also at an international level (by international I am not necessarily including North America in a big way). A concert featuring him in Ankara, the Turkish capital attracted over 500,000 visitors.

His history goes on. He has been involved in cross cultural projects such as collaborating with famous Greek Mika Theodorakis. He is a regular newspaper columnist. For one term he was an elected parliamentarian where he broke with his party and finished his term as an independent.

His concerns include that Turks should think of themselves as a nation (of many backgrounds) rather than a race. Another issue is youth and their predisposition to go astray.

The two versions of "Bliss" present an interesting contrast. I think I was fortunate to have seen the movie first and then read the book and would advise any curious readers to follow that example. There is some mystery involved so I will try to avoid giving too many clues that will spoil the two different endings.

Both are centered around what are often called "honor" killings. In reality this tradition, still prevalent in some European and Asian cultures, is where the victim is blamed for something shameful. In this case a young girl is raped and chooses not to publicly blame the guilty party. It is set in a rural, isolated part of Turkey and when females are raped it is considered shameful for the whole community. The young girl, Maryem, although encouraged to do so decides not to take her own life.  Cemal, just returning from army service is chosen to take her away to the big city of Istanbul, where he is instructed to kill her.

From there a few other characters are introduced and the plot moves along. Soon they enter the life of the third main character, Irfan, a professor who has escaped from a life of unhappiness (despite much material success and intellectual acceptance). The three of them impact each other in profound ways until the story is resolved.

That brief outline defines both movie and book, but there is a world of difference between them.  I felt both were very enjoyable and satisfying in their own way.

The movie contains a mystery. In the book the mystery is resolved at the beginning and the author deals with what he considers to be more important. The novel's message has more to do with how people inter act and deal with traditions. All three characters are dealt with in much more depth in the book and you understand their perspective much better on the whole. Some of the minor characters are also explained better.

If you read the book first you would take a better understanding of the three principal characters and what they are up against. But you would be missing a story tension that in the end highlights the hypocrisy of the tradition in the movie version. There is definitely tension in the book that compels you to carry on, but I would argue it is not as strong.

In the book the mystery (already answered to the reader) works out differently and plays a different role in the dynamics. There is a little more social politics in the book regarding the Kurds and Alawites (a relatively minor religious group, but with disproportionate power in nearby Syria). The book has one character that gives the professor an opportunity to discuss various thoughts on Turkish social and political mores that is missing from the movie. The author also shows his musical inclinations with a few references (one, Jean- Pierre Rampal which I am listening to as I write this).

The movie ending is actually referred to in the book. One character actually suggests it and the professor replies that that would be a Hollywood ending, implying not realistic. I was predisposed to like the movie ending as suspenseful and poetic justice, but Livaneli was striving for a different message and was equally effective to my way of thinking.

The movie is also enjoyable, not only for how the mystery adds suspense, but for a number of mechanical details.  Livaneli as a well regarded writer and director of movies was given the option of writing or directing the movie and he rejected both. Instead he opted to write the music (which he had done for several other movies). That was one of the enjoyable mechanics I noticed before realizing the composer was also the novelist. I had read and now agree that it seems a combination of folk music modernized.

Another mechanic factor is the cinematography. I had read about one trick in the introduction and watched that part several times afterwards. It is an aerial view of a flock of sheep circling counter clockwise that is mesmerizing. The movie/DVD viewer gets some gorgeous views of Turkey, both rural and Istanbul that are captivating (sorry about the cliches, but they do apply).

Two more elements I would include are the acting and the writing. The girl, Ozgu Namal is very well played and likable, but in the movie seems a little more mature than in the book. The two main males, Talat Bulut and Murat Han seem to fit what I later read in the book. The minor film characters all seem believable and lend some realism.   Another movie of Ozu:  http://www.therealjohndavidson.com/2021/09/beynelmilel.html

The book has more characters than the movie and they advance different themes effectively and in some cases take the story in a different direction. The idea of any movie is to condense the more time consuming book into something that can impact a viewer in an entertaining and possibly educational manner. The script of this movie does pull the viewer in and does deal with the "honor" killing issue and in some ways more effectively points out the hypocrisy. It certainly is entertaining and a joy to recall.

Movie executives are inclined to make a story more attractive to non readers and save expense (by cutting out characters and distracting subplots). Sometimes it works and in this case had some benefits.

The book is richer in character and political/social commentary. In conclusion I recommend both the movie and the book. To get maximum enjoyment I suggest you see the movie first--if it doesn't entertain you and intrigue you, well I suggest you move onto something more promising.  I am glad I read the book and understand the underlying thinking a little better. I will be looking for more outputs of Zulfu Livaneli, whether it be books, films or music.
Posted by John F Davidson at 6:47 AM