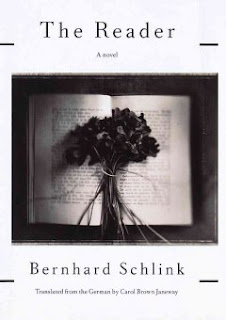 This book was recommended by Vijayakumar Mk Nair who has a history of suggesting satisfying and enjoyable books.  I had enjoyed the movie several years ago but it was pointed out (no surprise) that the book is better than the movie.  The German translation for the title is actually "The Narrator," which better suits the format.

The beginning recounts the time when the narrator, Michael Berg was only 15 years old and is attracted to Hanna, a woman 21 years older. who helped him clean himself up from a vomiting incident.  She responds by becoming a lover with some unusual habits.  Warning: there is a lot of sex in both the book and the film.  She seems to prefer a simpler life than one she had been offered by employers willing to give her a promotion.  Not only did she reject the promotions, but also disappeared and got another relatively low level job.  To enhance their sexual relations she enjoys the narrator reading a wide range of stories including classics like "The Odyssey"  Then as he becomes obsessed and concerned about offending her she disappears, the result of another promotion offer.

The next section is ten years later when the narrator is now a law student observing at a trial for Nazi concentration camp staff and learns she is accused of complicity.  She is outspoken and is very truthful despite advice from a lawyer and social pressure from the other accused of working with her.  Her co-workers gang up on her and claim she wrote the report that is key to the case against them.  Surprisingly she admits to writing the report.

Then the past clicks in the narrator's head.  Why she walked away from better jobs and why she liked him reading to her.  She couldn't read and was ashamed of it.  The narrator, Michael Berg finds himself in a dilemma; should he approach legal authorities and tell them the extenuating circumstances--she could not have written that report or any other.  He consults both his father and a university professor and concludes not to help.

The book was written by Bernhard Schlink who was born in 1944 and thus is part of the post Holocaust generation.  His father was a leading German Lutheran theologian.  He went onto the position of professor of public law and the philosophy of law.  He also has written crime novels, some of which were made into films. He chose to tell his story through a narrator who attempts to explain his motivations and doubts.  Michael Berg, the narrator is of a generation that knows a little of their parent's acceptance of Nazi rule.  They disrespect many of the parents' guidelines of proper behavior and many indulge in political protests.

Watching the special features for the movie DVD I realize the writer, director and producer were all conscious it was very difficult to capture the thinking.  They adopted some incidents to try to convey the thinking.  One I recalled was how Hanna confronted by a menu and asked for her selection deferred to Michael.  The story continues over a number of years.  I prefer the ending of the movie--in the book the narrator is by himself, but in the movie he is with his daughter.

Several of the creative staff including Kate Winslet read the book in one sitting.  I saved it for an airplane trip to Edmonton, starting in the local airport and finishing before landing.  It was very engaging and like others I appreciated the thought process.

David Hare was an award winning British theatre playwright.  His film scripts include "The Hours"(2002)) and "The White Crow" (2018).  After reading the book he campaigned with Steven Daldrey to turn it to a movie.  They both worked with Bernhard Schlink.

Stephen Daldry also was very involved with British theater and won awards.  He has been the director for six Oscar nominated performances including Kate Winslett.  Other films include as director and/or producer include "The Hours" (2002),  " Extremely Loud and Incredibly Close" (2011), "Billy Elliot" (2014) and "The Crown" (2016-2019).

A German story filmed in Germany they sought German actors.

The key role of the younger Michael Berg was David Kross the 15 year old had to brush up on English.  They decided to wait until he turned 18 to film sex scenes which he was nervous about, but were approved by his mother.  His subsequent films include "War Horse" (2011) and "Into the White" (2012).

In sum I would say the movie does present the essence of the book, but if you really would like to better understand the thinking you need to read the book--I am glad I did.

Another blog about a book to a movie both of which I enjoyed is  http://www.therealjohndavidson.com/2011/05/turkish-delight-in-book-and-movie-form.html   In this case the book author was offered a chance to write or direct the movie and had the experience, but instead wrote the music. The book actually anticipates how the movie would distort and it was correct.

Still another blog dealing with books to movies has a section on Michael Ondaatje who saw his "The English Patient" turned into a movie with a lot of trepidation, but came away with admiration for the editing process   http://www.therealjohndavidson.com/2012/09/predictability-and-enjoyment-of-movies.html

As usual I have bolded first mention of movies I have seen.