TALKING TO THE ENEMY HOW ELSE CAN YOU UNDERSTAND THEM? 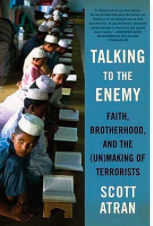 The author Scott Atran is an anthropologist and like most of us has heard descriptions of terrorists as religious or political fanatics.  What surprised him is that other factors turned out to be more critical.  If we start with wrong assumptions it will be more difficult to find a solution.

Evolution theory has focused on individual traits, but lately more attention is being paid to group dynamics--how did one group survive?  Co-operation and sacrifice for the common good has played a role.  In the early stages of human development relatively we had weak bodies, but big brains and a tendency to be gregarious.

In fact ideology and religion are forces that unite groups even as each believer may have different degrees of faith.  Trusting strangers is a very necessary factor for civilizations to develop.  Even so we are suspicious of people who do not look like us, do not express themselves the same way or who do not respect our sacred values.  We can affiliate with "strangers" more readily if they share some of our values.

Sacred values are personal and group priorities that we can identify (sometimes with help), but we don't always understand the sacred values of others.  Sacred values are often so strong with a group that they cannot be pushed away by mere material considerations.  One example might be Palestinians feel they have a right to the same land that some Jews feel they have a right to.  Offering cash and like considerations while ignoring their attachments to the values is an insult and can actually harden feelings.

Scott noticed that many of the terrorists went to the same school or played soccer together.  In some groups the heroes were sports celebrities and in others terrorists.  Some were admired and aspired to, not necessarily because of religious beliefs but because they stood up for the group.  What gives some of them meaning is publicity which he feels our media is complicit in giving them.  Publicity makes heroes.

What turns many people to terrorism (or sympathy for terrorists) is unemployment, poor schooling, and political marginalization.  He cites African Americans in the United States and Muslims in Europe.

In passing  there was an interesting quote from Andre Malraux as follows:  "The greatest mystery is not that we have been flung at random among the profusion of the earth and the galaxies, but that in this prism we can fashion images sufficiently powerful to deny our nothingness."  Realistic, but hopeful that there is some meaning in life.

A lot of critics of terrorism point out the religious content and wondering how the perpetrators could be so misled.  Scott contends that the critics are overlooking the social content.  Most religions, including Christianity have violence in their messages.  Again religion unites people.  The author is an atheist and thinks of religions as belief in the absurd, but points out that rituals that indicate our acceptance of the absurd bonds people together.

Terrorism should not be the priority it is because the average person has many more likely life threatening concerns (that they mostly ignore).  We need to get beyond the stereotypes and learn the root causes.  Many feel the outside world is against them.  In truth we do not understand a lot of foreign customs.  The author suggested one Afghan custom was underestimated and that is the importance they place on treating guests even if they do not see eye to eye with them.

Another recommendation from Fareed Zakaria.
Posted by John F Davidson at 5:29 PM