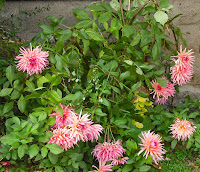 The weather is weird, has been weird for a few years.  Part of this winter has seemed more like spring.  Some fairly heavy snow then all melted twice.  Now however it looks like a snow day, meaning I am not expected to risk my life to get into work.

A previous blog recounted what it has been like to live on a corner for a Canadian winter.  You can read more at  http://www.therealjohndavidson.com/2013/12/living-on-corner-during-canadian-winter.html            One detail not mentioned was that because I am already out there I often shovel an extra few yards to cover my neighbours on both sides.  I have already done three or four times as much as their sidewalk frontage so it is hardly noticeable.

This does not go unappreciated.  The neighbours work different hours and of course snow doesn't follow a schedule.  When I am at work or sleeping a neighbour is apt to be out and recognizing I am not able to do my share, so they do.  Neighbors on either side of me have been known to shovel my sidewalk on their side.  Some days there is not much left for me.

One neighbour went out of her way to thank me for doing her little bit of a sidewalk (she was out finishing off the sidewalk to the house).  Her husband was out of town and she had a sore back.  This morning the snow continued and her husband was out but the truth is he has helped shovel our sidewalk lots of times when I have been at work.  Out shovelling to day I learned he had just got back from Belo Horizonte, Brazil where it was 90 degrees F.

Shovelling is important for all your neighbours.  Getting to work, to school, for shopping, shovelled sidewalks make it a lot easier.

Taking care of cars.  I park on the road.  Not only do you fight the snowfall itself you also fight the snow ploughs.  A lot of pushing and shovelling to get everyone off to work.  Some days work is closed and neighbours are out tidying up the mess.

NEW EDIT:   First I again apologize for putting up an incorrect link on Facebook.  I lay down to rest after my last blog, but got woken up as a neighbour wanting to borrow my snowblower.  This requires a confession, particularly to George and Shirley Harrison, wonderful neighbours who moved to a place where shovelling and snow blowing is not a requirement.  George gave me his snow blower (he lived on another corner house across from ours).  I never really used it and now I appreciate it was just a little harder to start as I could only store it outdoors.  One of our neighbours, Elder who works as a landscaper (only moved from the Azores 4 years ago) was mechanically inclined and got it to work in the summer.  His job in Toronto was snowed out today, so he wanted to do something with his time.  He plowed our sidewalk and quite a few of the neighbours.  He does have a protected place to store it and so I thought it made more sense to let him keep it.  We will help supply gas.  We found a happy home for the snow blower.

You might wonder why there is a photo of flowers on a snow story.  These flowers got my attention last summer.  They are of a neighbour.  The snow helps provide moisture that flowers need.
Posted by John F Davidson at 3:51 AM