In Praise of Water Polo 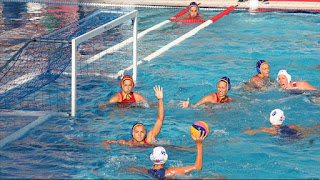 A confession to start this blog.  I haven't seen a live water polo game in years and only occasionally watch during the Olympics and Pan Am tv coverage.  My daughter, Heather who got me started on blogging is also the one who did get me interested in water polo.  Today I was reminded by a front page photo of the Hamilton Spectator that included my daughter's high school team, Westdale High.

No one was more surprised than me when my daughter picked up an interest in competitive swimming.  I didn't swim and although I did watch it at the Olympic level I didn't picture my life revolving around it as much as it turned out.  Swim meets tended to be out of town, sometimes requiring an overnight visit meaning sometimes the whole family took a vacation.  But the real time commitment came with practice which often meant getting up at 5 am and then later going to another practice in the evening.  I would hear about hockey parents going to a lot of practices and out of town games, but on the practice end I think the swimmers take the prize.  One of the bonuses is they are more fit.

Both my wife and I got involved in volunteer activities.  One of mine was getting results to the local paper and one pleasant memory was talking to Joanne Malar who once held a world record.  More concretely I got involved in officiating and worked myself up the ladder a bit.  Instead of being one of the cheering crowd I felt I was part of the action.  One of our club members actually made it to the Olympics as a starter for swim events.  More on my sports volunteering:  http://www.therealjohndavidson.com/2013/06/my-career-as-sports-volunteer.html

Swimming is very demanding.  All that sacrifice is necessary because to get to the top is extremely competitive.  Along the way it is not always fun. They go up and down lanes continuously with the only variation being stroke and pace and occasional breaks.  One coach explained it to me that there are countless practices in relation to an actual competition meet unlike in team sports where it seems there might be one to three practices for every game.  At one point my daughter got involved with water polo at the high school level and my wife and I started attending games which admittedly were more fun.

In my adopted city of Hamilton water polo is in almost every high school and my daughter's school, Westdale had a long tradition.  They like to recruit swimmers because they have endurance and speed, both in demand for water polo.  It didn't seem very ladylike and later my daughter confirmed it really wasn't for delicate people.

What do sports junkies get out of watching sports?  Although fictional drama works very cleverly to make one be pleasantly (sometimes otherwise) surprised at the ending it can't always match the unpredictability of a sports event.  Sports gives an opportunity to display character.  Overcoming difficulties and working as a team.  Skill, strength, speed and endurance. can be appreciated  It is all relative at one level.  If you haven't played a sport you can't really appreciate the skill, but the more you watch the more you can understand the skills required to win.

As in other sports a close game is more exciting.  With Water Polo we have seen come from behind and hold on to a slight lead, overtime tension and winning and losing.  My first sports love is basketball and I remember someone referring to it as a game of deception and let's be honest we all love to see one player fake out another or a defender calmly handle a fake.  The same holds true in water polo where faking is a key to getting around a defender or setting up a goalie for a shot.  My daughter assures me water polo is fun and it is easy to notice on the players' faces.

The first year Heather played for Westdale she was on the city championship team.  The last year she was the team captain and definitely one of the reasons they won another city championship.  The games were by no means a wipeout and winning required keeping your cool under pressure.  Of course it is always nice to be on the winning side, but as I get older I appreciate it is the opponent that brings out the best in you.  Learning to accept losing is always a character builder.

She went on to play for a non school team, but eventually she went to King's College in Halifax where interest was not as high.  Water polo is one of the sports I look for in the Olympics and other international events.  Water polo was one of the first team sports to be added to the Olympics back in 1900.  Modern day water polo came from England and Scotland in the late 19th century.

To be played properly water polo requires a deep pool.  Switching ends with one end being shallow takes away from skills involved.  A lot of the action is beneath the surface as players jockey for position.  It can be spectacular to see a player rise above the surface and if the defense can sometimes counter that.

All sports have merit.  As parents we want our kids to be fit and healthy and to take on challenges and to work as a team.  Water polo is something that should be encouraged and is certainly enjoyable to watch.  No need to anticipate boredom, if you get to know the game it will get you excited.
Posted by John F Davidson at 1:11 PM