SUPERCRAWL ON ITS TENTH ANNIVERSARY 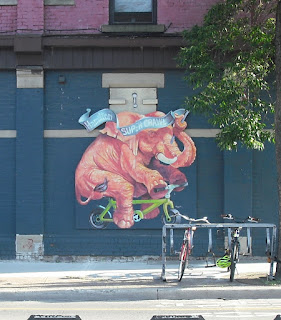 When I moved to my current house some 36 years ago it was affordable and not too far from downtown Hamilton.  The problem was that James Street North, the main way downtown was not very attractive and I learned that people from other parts of Hamilton frowned upon it.  However over the years a few things started to develop.

Apparently Toronto real estate prices increasingly forced some artists to look for alternatives.  Some discovered that not only was James St N in Hamilton more affordable, but there were some interesting older buildings that hadn't yet been torn down to be replaced by modern concrete buildings.  Two galleries decided to co-operate by combining two open houses.  Over time more artists got together for what was called an "art crawl"  Every second Friday of the month art studios and galleries would stay open to invite the general public to look at their art and perhaps be entertained by musicians and food.   Restaurants soon realized they could service a larger crowd.  I remember going a few times for the novelty.  Over a decade ago some organizers realized that the public had made the art crawls self sustaining and it could be expanded.  Politicians entered into the discussions and a budget was drawn up to have what came to be termed "Supercrawl."  Insurance and municipal expenses were included.

The first one in 2009 started out as a one day affair, with one city block closed to cars, but each year they attempted to make some kind of improvement.  The second year they closed two blocks and attendance increased.  It was always intended as a "free festival."  Politicians and local businesses realized  this could be a big boost for tourism, not to mention the city's image.  At one point they brought in food trucks for a greater variety of food and to handle the bigger crowds.  As a local I noticed that in good weather the food trucks dominated, but in bad weather the local restaurants were packed.  I am a supporter of the local restaurants and feel James Street North has some of the best restaurants I have been lucky enough to eat at.  One local specialty was Portuguese restaurants, not that I appreciated initially, but now love.

With such large crowds (over 200,000 some years) there is a big demand for eating.  A dozen food trucks are brought in and this year listening to visitors they added a lot of bench tables to make it more convenient.  A few years ago Hamilton was host to several soccer matches for the Pan American Games and local vendors were promised they would benefit.  In reality out of town visitors were herded right to the stadium and local businesses did not benefit significantly and in fact some lost out as they had invested in upgrading and stocking for the expected crowd.  At this Supercrawl I am pleased to say all of the restaurants along the route (and even slightly off) were packed.  We went through about half a dozen before we were squeezed into Nique, but once there we were not rushed and enjoyed a great meal.

On one of their early years they were virtually rained out.  Weather is unpredictable, but they have taken some precautions.

For the 10th anniversary they added a fourth day on Thursday as a sort of warm up.  On Friday and Saturday night and only a little less on Sunday it is very similar to walking through the midway on Kids' Day.  There are interesting things along the way--street entertainers, art installations and a wide variety of boutique type booths.

A big popular band is a key draw.  I don't usually stay that late, but did for K'Naan a few years back.  This year they headlined with Broken Social Scene, a previous top act on Thursday night and Lights was the highlight for Saturday night.

The Hamilton Philharmonic Orchestra offers an interesting combo of a small version of orchestra with a local indie rock band.  There is a little cross over.  Introducing some classical music to some and a local band to others.  Their latest version was with The Altobeelays. 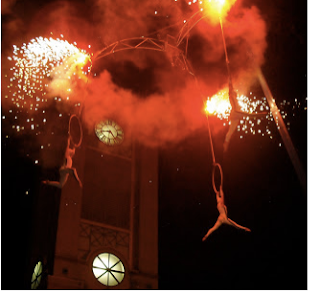 Circus Orange at their first appearance was a bit of a mystery.  They put on an aerial display of acrobats with fire.  The photo is from that first year.  Each year they have done a distinctly new show, sometimes using local buildings such as a parking facility.  People line up, mostly standing over an hour in advance to get a good view.

I included references to the art crawl and Supercrawl in more general blogs, but I started blogging about the art crawl by itself in 2013:  http://www.therealjohndavidson.com/2013/08/james-st-north-art-crawl-is-progressing.html

A few random shots from this year.  The logo at the top was designed by Lester Colomo. 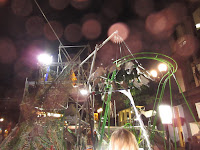 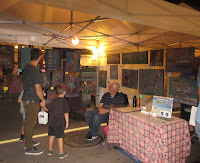 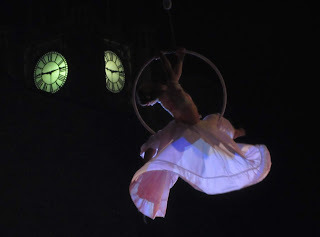 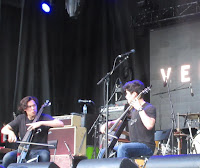 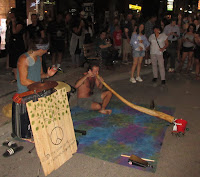 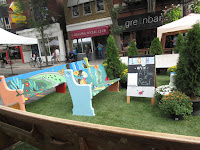