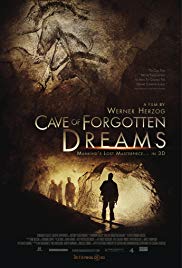 My first awareness of Werner Herzog was through documentaries, but that is only part of what he has offered the world.  Man of eclectic and eccentric interests.  Some very deep thinking once one is willing to deviate from the mainstream.  He made an impression with movie critic Roger Ebert who felt film criticism should be more than celebrity news.

"Cave of Forgotten Dreams" (2010) was the first film that I consciously became aware of Werner Herzog.  A very difficult location to show caveman art from 30,000 years ago.  Hard to imagine what would drive men to live in such an inaccessible hiding shelter.  Also what sparked one of our ancestors to express themselves in early art. A real challenge for cinematography by Peter Zeitlinger.  Although Werner did not like 3-D he filmed this one in 3-D as he felt it added to the perception of the art on curved cave rock.

Peter Zeitlinger got Werner's attention by his skill with a hand held camera.  He had been born in Prague, but raised in Austria.  Once hired by Werner, the two worked on many films, including dramas and documentaries.  Zeitlinger once commented that "Werner is a director who thinks in terms of inner vision."

Werner, born in Germany formed his own film company in 1963, but always found financing films precarious. He gained experience with short films.  His first feature was "Signs of Life" in 1968.  It won an award at the Berlin Film Festival.and another German award.  Some accounts of notable movies, some of which I saw.

"The Enigma of Kaspar Hausar" (1974) was about a mysterious appearance in 1828 in Nuremberg who seemed almost mute and in poor condition, but suspected might have royal connections.

"Fitzcarraldo" (1982)  demonstrates Herzog's striving for realism.    Based on a true story where a man intent on bringing opera to the Amazon jungle switched a boat over a hill by dismantling and then reassembling, only Herzog insisted on moving the boat intact.   He could have taken an easy location near a city, but opted to go deep into the jungle.  Werner believed location was essential not only for visual effect, but to put actors and crew voodoo of location.

A separate movie directed by Les Bank,  "Burden of Dreams" recorded much of the extraordinary obstacles Herzog dealt with boiling down to time and money.  The movie was originally scheduled during the rainy season to avoid a boat being grounded in shallow water.  The lead actor Jason Robards became ill and left and soon after Mick Jagger also had to leave for an album commitment.  Claudia Cardinale had been hired.  These delays led to other delays and some boredom and tension among crew and native extras and helpers.  At one point at the urging of a Catholic priest he hired some prostitute to avoid trouble with rival tribes.  All this in turn led to financial stress.  Watching this Werner spoke German, English and Spanish.  Won best director award at the Cannes Film Festival.

Joe Bini teamed up as editor for "Little Dieter Needs to Fly in 1997 .  He went onto work on several movies, both documentaries and dramas with Werner. Werner did not want editor on set as he felt they had to be independent.    An interesting short seen as a special feature was about the music selections for "The Grizzly Man."  As editor Joe appeared as edits had to be matched up to music.  Werner, was not musical, but had definite ideas and for this film had brought in musician/composer Richard Thompson and some other musicians to develop a score from the ground.   He feels that cinema lines up with music better than any other art.  Bini was noted for "We Need To Talk About Kevin," "You Were Never Really Here," and "Manhunt:  The Inside Story of the Hunt for Bin Ladin."

"My Best Fiend" (1999) related Werner's experience with Klaus Kinski who was a very difficult actor to work with.  Physical threats were part of their relationships, but at the same time Werner felt Kinski gave a unique feel to the 5 movies he appeared in.  Kinski had died beforehand and Werner wanted to remember him and their relationship.

"The White Diamond" (2004) was a documentary on exploring the rain forest using a unique airship that provided some drama of its own.  Won a New York Film Critics Circle Award (tied with "Grizzly Man").

"Grizzly Man" (2005) was filmed from videos by Timothy Treadwell after his death and supplemented with interviews with friends and relatives.  Timothy comes off maniacal, but did make friends with wild grizzlies and try to communicate their role in nature.  Unfortunately Timothy and a girl friend were killed and eaten by an unfamiliar bear, part of which was recorded.

"Encounters at the end of the world" (2007) no penguins (actually a brief reference with a penguin expert)--focuses on humans that came to McMurdo--quite a wide range of eccentric people--one thought that scared me a bit was a linguist who commented that it was likely that 90% of languages would disappear in his lifetime--comparing to species extinction-- a great loss.  Nominated for an Oscar.

"Bad Lieutenant:  Port of Call New Orleans" (2009)  was about depravity and madness with Nicolas Cage portraying (to really good reviews) a corrupt and addicted cop.  His girl friend was played by Eva Mendes.

"Into the Abyss" (2011) about really about the death penalty.  In this film Werner is exploring what makes killers kill and others want to kill the killer.  He had one interview with a condemned inmate just a few days before his scheduled execution.  Some details of the original crime were discussed, but the focus was on why the killing for both the individual and the state.  My understanding was that Werner was against the death penalty not so much because the accused may deserve it, but that someone had to do it.

"Red Army"(2014) used Werner as executive producer.  An interesting movie for both hockey and non-hockey fans.  Filmed in North America and Russia.  One of my more popular blogs:   http://www.therealjohndavidson.com/2017/09/the-red-army.html


"Queen of the Desert" (2015)  was about part of the life of Gertrude Bell and her her efforts in the Mid East.  Nicole Kidman played the title lead role.   Although she did influence events, much of her advice was ignored.


Werner Herzog narrates most of his documentaries and often appears as an interviewer or presenter with a gentle accented voice that compels listening.

A Werner Herzog quote picked up from Facebook:  "Dear America:  You are waking up as Germany once did to the awareness that 1/3 of your people would kill another 1/3 while 1/3 watches."

Another quote that hit me was by Roger Ebert during a review of a Herzog film, "...feel I am lucky to be old because there may not be another lifetime's length of happiness left for most people on earth." After he died I wrote a blog that if you don't know him will give some insights:  http://www.therealjohndavidson.com/2013/04/a-few-thoughts-on-roger-ebert.html   The fact that he admired Werner Herzog enough to write a book of reviews and interviews "Herzog by Ebert" is enough to warrant more explorations.
Posted by John F Davidson at 1:33 PM