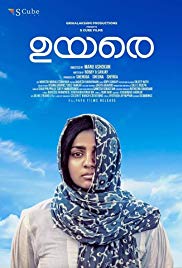 If it wasn't for Netflix I would never have been aware of the existence of "Uyare"  I revisited the original  trailer to see if I recalled it correctly.  There definitely was an element that motivated me to see it--a high rating and the subject of a woman in India piloting an airplane seemed unusual enough to want to know more.  I anticipated there would be obstacles and the trailer hinted at an unhappy romance.  If you looked very closely (less than 1 second screen time) you might have been prepared for the mid film surprise that formed the main dramatic tension.  So I will try to respect the intention of the marketing people so you can be jolted like I was and perhaps appreciate the movie better.

The rating --at the time 8.2 is an indication of a superior movie, but the trailer underplayed the drama.  There is not much romance, but there is tension.  The professional quality raises it above what an outsider might anticipate in a regional Indian language, Malayalam.

Palavi, as a young girl is fascinated with flying and tells her father she wants to be a pilot and after awhile he takes her seriously and supports her.  As a young adult she earns her pilot license.

The only real romance in the film is a dud almost from the beginning as the heroine has loyalty to a chauvinistic man with problems.  Eventually she gets tired of his demands and verbally breaks off the relationship, but he is bitter and takes revenge in a violent way.  For the rest of the movie he occasionally re appears, not to ask for forgiveness, but to make her life more aggravating.

How she deals with a disfigurement is the crux of the story.  At first she is discouraged and her license is revoked.  Her friends are supportive, but only through some flukey circumstances she gets a breakthrough chance to be a airline hostess and you might guess later she gets to rescue a airplane headed for disaster.  The story is more than that.  There seems to be a chance at a romance, but she squashes it.  What keeps her going is the support of friends and especially one man, who was strongly criticized by his father, but defies him and others.

What sustains your attention is the lead actress, Parvathy Thiruvothu.   Before getting into films she had been popular as a tv anchor for a phone in program. Appeared mostly in films in the Malayalam language, but has appeared opposite Dhanush in a Tamil film and opposite, Irrtan Khan in a Hindi film,  "Qarib Qarib Singile"  She has been a big winner in regional awards.  In an IMDB feature asking what her favorite films she listed two of mine-- "A Separation" and "The Secret in their Eyes" specifically the Argentine version.  But she especially likes any film with Jake Gyllenhaal.

Her key supporter is played by Tuvino Thomas educated as a software engineer.  He was born a Syrian Catholic.  Also a regional award winner who is popular and busy, but mostly in Malayalam films.  He plays a sort of irresponsible son of a wealthy man who wants to prove himself and does take a dicey risk.

Asif Ali plays the boyfriend who you quickly come to dislike.  Generally he plays more likeable characters, but does well in this role.  He has produced two movies.

Siddique plays her father.  His career started in 1985 and he has appeared in at least two noteworthy films.  The original version of "Drishyam" (I blogged the Bollywood copy: http://www.therealjohndavidson.com/2015/11/driishyam-bollywood-remake-masterpiece.html  ) and was the lead in "Naa Bansaare Talli" a Telegu film about sex trafficking with a twist highlighted in my year end movie review for 2018.  He also has produced two movies.

Manu Ashokan, the director with his first feature.  He had been an associate director for the Bollywood version of "Traffic"

Bobby and Sanjay were a writing team involving the director and editor they brought everything together.  A highlight of the movie is started in the opening scenes, but without the necessary context that comes in dribs and drabs over the course of the film.  Soon you are introduced to the heroine as a young girl and quickly she grows up to a college student and some of her conflict with her boyfriend.

Editing keeps the story flowing under the guidance of Manesh Narayan.  Manesh started with Malayalam films, winning an award with his first.  He has done significant films in Tamil, Telegu and Hindi languages.  In 2017 he directed and co-wrote, "Take-off" that won awards for himself and the film.

Music by Gopi Sundar.  Music in the background is enjoyable.  Shakthisree Gopalan was a factor in my decision to watch this movie and she sings one song.

Cinematography was handled by Mukesh Muraleedharan.  This was his third film in charge after years of various tasks in the camera department.

It was released in India in April of this year and was listed on Netflix in August.  I am sure it will be nominated for awards.

If you fear watching a movie in a language you might not have heard of please be assured with subtitles you will soon be gripped.  It is very professional.  A post on regional films from India:  http://www.therealjohndavidson.com/2017/01/regional-films-from-india.html
Posted by John F Davidson at 11:44 AM