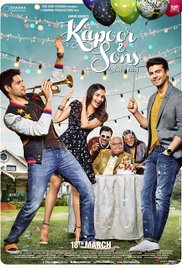 Outsiders can never quite understand conflicts the way insiders do.  Conflicts create impressions that can affect outcomes.  In some ways outsiders can be upset that there is a conflict and in others they take sides.  I feel the conflict between Bollywood and Pakistan cannot be ignored.

At base is the conflict in Kashmir that is disputed between Pakistan and India.  Terrorists have taken action over the years, but this past September terrorists killed 18 Indian soldiers.  The whole Kashmir situation is controversial and is very emotional for both sides.  To me, like in most situations I would be most concerned about what the actual people living there want.  Then the next thing is how to treat those who might lose out.  When the Indian subcontinent was partitioned in 1947 an immense amount of suffering resulted.  Feelings from that long ago date still stir resentment.

Only recently have I been conscious that there are Pakistani actors in Bollywood.  Fawad Khan in "Kapoor and Sons" made a strong impression, but at this point he seems to be the focal point of this issue.  He was cast at a time of India reaching out to Pakistan, but the good feelings are now gone.  In fairness it is not so much the Bollywood producers as the distributors (pressured by nationalist party MNS) who are leading the backlash.  Not too long ago I saw an interesting promo for "Ae Dil Hai Mushkil," but more recently I learn that because Fawad Khan has a prominent role in it some distributors are refusing to carry the film.  Karan Johar is promising never to hire another Pakistani actor.  I bought some of the music from iTunes several weeks ago.

India is amazing in the number of religious groups that live with each other.  There have been serious problems between Hindus, Muslims and Sikhs, but on the whole India has survived and grown.  Pakistan is more a one religion country and has had more tension between extremists and moderates.

A movie I had looked forward to was "Tigers" which I read about when researching for a post on Danis Tanovic.  The main theme dealt with corruption in the pharmacy trade in Pakistan.  Although shown at the Toronto International Film Festival, a few years back, it has not been released to the general public.

I dislike censorship, but I don't feel comfortable with  hard core pornography or extreme violence.  I can also understand a case for libelous content.  But those in authority are sometimes abusive.  The distributors are imposing political censorship  based only on participation in a movie.

Terrorists feel strongly, but are powerless to organize an army.  They attempt to gain their ends by shock and often welcome backlashes.  ISIL is trying to convince moderate Muslims that they are hated by others. They have been a little successful in this regarding recruits whenever Islamaphobia erupts.  I suspect the Kashmiri terrorists are pleased at the reaction of Bollywood.

In the United Arab Republic they are filming a tv series with both Pakistani and Indian actors.  One of them Javid Sheikh, without knowing he was Pakistani, had been commented on for a Bollywood film I enjoyed http://www.therealjohndavidson.com/2016/02/tamasha-wonderful-story.html The tv series will likely be distributed in the UAE and it is likely that both Pakistani and Indian audiences will seek it out.  Both countries enjoy each others' tv serials as well as movies.

Bollywood is always looking for talent wherever they can, but it has not been a one way street. Nandita Das, Naseeruddin Shah and Om Puri have all appeared in Pakistani films.  Musicians have crossed the border in both directions.  Bollywood stars are quite popular in Pakistan and have even appeared in tv. commercials.

I hope this situation is resolved before next January when Mahira Khan's role in "Raes" will be released with Shah Rukh Khan.  I am not aware of Pakistani involvement of other non Bollywood Indian films such as Tamil that I sometimes am able to watch.  I hope it doesn't result in any more censorship.

Dialogue is critical.  There actually is not enough of it.  A resolution to Kashmir is needed to undercut the terrorism, but if not done fairly may unleash even more.  India has resisted the idea of a mediator and I imagine their concern is to get an impartial one.  Perhaps the best one would be someone totally removed from the situation--perhaps a retired UN president or someone like Jimmy Carter.  Everyone on both sides has to respect what the actual residents want--an issue might be the preferences of ex-patriots.

Bottom line.  I like to watch good movies wherever they come from and whoever helps make them.  I also prefer dialogue to emotional arguing.
Posted by John F Davidson at 1:17 PM