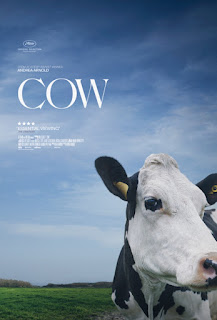 Several years ago I decided not to drink milk although up until the decision it was one of my favorite drinks.  My decision was based on health reasons--my daughter's swim coach had told them not to drink milk before a meet as it would be slow to digest.  At about the same time my son and daughter's choir master told them not to drink milk before a concert as it would clog up their throats.  Researching only reinforced and amplified these concerns.  Fortunately there are alternatives--almond milk, cashew milk, oat milk, even water.

At one time in our history cow's milk enabled Europeasn to boost their health economically.  As civilization advanced breeding, machinery and business evolved to control cows and the associated business.  The dairy industry is important to Canada and is a critical element of trade negotiations.

"Cow" (2022) demonstrates that cows do in fact suffer.  Shortly after birth their ears are punctured to tag them.  We see a mating, but we are also aware that artificial insemination is becoming more common.  After insemination a veterinarian is there for an invasive procedure to determine not only if they are pregnant, but also when the cow might start producing milk

Calves that are not deemed likely profitable milkers or breeders (mostly male) are disposed of.

We are shown lots of grass eating.  The cows convert the grass to milk and also skin, bones and methane which become environmental concerns.  Environmentalists are concerned that land that could help mitigate climate change is being diverted for land that aggravates the planet's problem.

We watch calves being born, possibly a breach birth as a team of people are pulling on a rope.  After a brief interlude the calves are put out of the reach of their mothers who are agonizing over the separation.

In some ways the film is boring in the same sense that life of cows IS boring.  Humans are constantly looking for some stimulation, but with farm animals stimulation is limited to what is profitable.

The film ends with no warning with a cow being shot dead that supposedly was taken away by bulldozer.

Cow's milk is good for calves just as human milk is good for humans.  I had read that goat milk is becoming important not only for taste, but also it is supposed to be healthier and closer to human milk.  It has become so popular that there is a problem of what to do with the male goats as most Canadians have not developed a taste for goat meat.  Many of these male goats will be killed and never eaten by humans.   There are marketing efforts to get more Canadians to eat goat meat.  I will be looking for substitutes for ice cream and cheese.

Andrea Arnold was the director.English born she began her tv. career as a dancer and acted .  She graduated from the American Film Institute in 1991.   Three times winner of the Jury prize at the Cannes Film Festival.  Won Oscar in 2005 for best short film, live action.  Currently up to 67 film awards,  Her       films include "Fish Tank" (2005) and "Wuthering Heights" (2011).

Magda Kowalczyk, the cinematographer was born in Poland  and had graduated from Polish National Film School and the Budapest Cinematography Masterclass.   Has filmed in the United Kingdom, Poland, United States and Israel.

Watching this makes us aware of some of the consequences of our decisions are unpleasant.  Many are apathetic, but others do care.

Not sure where this film can be accessed, but I was able to get the DVD from my local library.