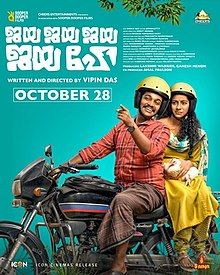 Some of you may have noticed an increased interest on movies from India especially in my case for Malayalam movies.  I attribute this to Kathy Gibson who blogs mainly about Bollywood movies, but carefully lists regional Indian films.  Combined with the competitive streaming market there are a lot of good and excellent  foreign sources of entertainment.  As an eager consumer  I have been directed to enjoyable and satisfying films.

"Jaya Jaya Jaya Jaya Hey" (2022 reflects typical Malayalam culture, to an extent  but with a twist that reflects all cultures to an extent.  We in the west like to think we are progressive, but in fact the process has been a long time developing and still has a long way to go.  In most cultures there is a male bias.  It is us males that are able to use our superior physical strength to dominate our female partners.  Gradually women have fought back and we have learned that female contributions can make our lives more satisfying.

Malayalis are civilized.  Arranged marriages are still common, but we can appreciate parents want to protect their daughters and are concerned that their daughters not be abused.  Jaya was brought up to be educated and her father boasted that she would be the next Indira Gandhi.  She had a teacher who seemed to be a feminist, advocating equality and she fell for him, but he soon revealed another side and she was stunned.  Her parents were convinced that the solution was an arranged marriage after being told her education could continue after marriage.

A suitable man, Rajez was found, even acceptable to Jaya.  After the marriage it seemed that Rajez had been putting on a show, but in reality was a chauvinistic male prone to temper tantrums.  He blocked her education ambitions.  He slapped his wife for minor, even imagined offenses.  He would feel guilty, apologize and take her out to a movie or restaurant.  Then the process would repeat.  For awhile she accepted his behavior and carried on doing her chores and even learned new recipes liked by everyone from her smart phone.

But then we were all surprised when she stopped him in mid slap and actually beat him up enough he sought medical attention.  Brutal fighting is often central to a segment of Malayalam film audiences and this is more martial which we learn she picked up on a smart phone.  He stops slapping her after a second fight, but still wants to redress his situation.  He is trapped by his culturally supported ego.  He is advised to get her pregnant and she will be forced to obey him.

She responds to his nicer behavior not noticing that he is monitoring her menstrual cycle.  In fairly quick order she does get pregnant.  She uncovers his game plan and is upset.  After a miscarriage she decides to leave him although both sets of parents are not supportive, feeling she should forgive and stick with her husband.

All this time we have been set up for a poetic twist ending.  In a sense it proves that gaining rights and respect require strength of one sort or another because those vested in the current power structure will not easily concede any of their benefits.  When both genders work together this could be a better world for each.

You will laugh, but you will also share Jaya's frustration.  Humor is a useful tool to help open awareness.  She is good intentioned, but kept down by outdated cultural habits.

Without a good cast and crew the idea behind this film would not be as impactful. The Malayalam movie industry seems to churn out very capable filmmakers.

Ganesh Menon was one of the producers.  His film credits include "Vikruthi" (2015).

Lakshmi Warrier was a travel agent who later started her own travel agency.   She sought advice of an uncle on how to use her travel business to work with the film industry.  He advised her instead to get involved with production management which she did and that in turn led to being a producer.  She also was a producer for "Vikruthi" (2015)

Ankit Menon wrote music and like many composers also was a playback singer.

John Kutty was the editor.  He started editing television shows in 2000 including an American series through Cartoon Network.  His film credits include "Pulimurugan" (2016)

Basil Joseph  played Rajesh who was the dominant and abusive husband and later a humiliated spouse who lost his power over his wife.   His film credits include "Virus" (2015), "Kilometers and Kilometers" (2020) and "Joji" (2021).  He does not always play a bad guy as I am just starting to "Palthu Janwar" (2022).  He has also directed 5 films.

Darshana Rajendran played the modest, but determined Jaya.  To prepare for the fight sequences she studied Taekwando for 2 months.  She credits the film realism to an action coach and John Kutty, the editor and Bablu Aju, the cinematographer.  But there was realism as she drew blood from Basil' face which required stitches, visible in later scenes.  Earlier films have included  "Koode" (2018, "Virus" 2019), "C.U. Soon"(2020), "Hridayam" (2022) and also did a Tamil film.

Manuj Pillai  played Jaya's mother-.  Her film credits include my favorite of this past year "#Home" (2021) and "The Teacher" (2022).  At that moment she has been in 78 episodes of a television series.  Check:  http://www.therealjohndavidson.com/2022/05/home-comedic-clash-of-generations.html

If you are not used to southern India films this might be a good place to start.  Having said that it is available from Hotstar which is transferring its library to Hulu which is owned by Disney+.

The first mention of films seen by me have been bolded.