This was supposed to be the year we recovered from Covid and to some extent we did. However it did rear its ugly head from time to time and has failed to go beyond the horizon.  Memories are fragile, but here are some I don't want to forget. 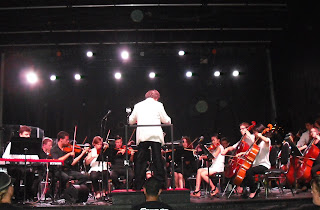 Boris Brott was killed by a hit and run driver while walking in his neighborhood.  He spent a number of decades leading various orchestras in different countries and arranging musical events.  He chose to live in Hamilton where his children attended Westdale High School.  I remembered attending a concert with the Hamilton Philharmonic backing Chuck Mangione, and later I was able to get the album.  I attended a few operas that he helped set up. When the Pan-Am Games had some soccer games in Hamilton he led some musicians backing up Terra Lightfoot which is shown to the left.  He enjoyed and promoted a wide variety of music as he felt it made life better.

Bill Russell, perhaps the winingest athlete in all pro sports with 2 national titles in the NCAA, an Olympic Gold Medal and twelve NBA titles.  He is the one who helped shift the attitude on basketball defense from an oxymoron to a game changer.  More than all that he stood up for human rights when it wasn't easy and was awarded a Presidential Medal of Honor.   You can read about his effect on basketball and me at:  http://www.therealjohndavidson.com/2012/09/bill-russell-and-rise-of-defense.html

Edson Arantes do Nascimento better known as Pele died in the last week of 2022.  He managed to survive through the World Cup that he had been a principle hero for.  I remember driving from Barrie to Toronto to watch Pele playing in an exhibition game at Varsity Stadium in 1971.  Brazil had won the World Cup in 1970.  You don't have to be a soccer fanatic to recognize one of the world's greatest athletes. 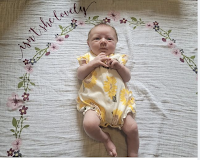 A new family member is welcomed to the fold.  Madelyn Rose, to be known as Maddie. 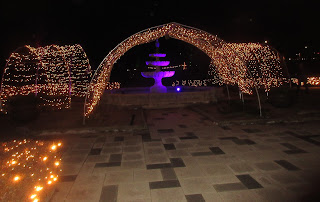 We both became members of the Royal Botanical Gardens.  Winter Lights were our first event there.

Early January is cold, but the scenery was wonderful. 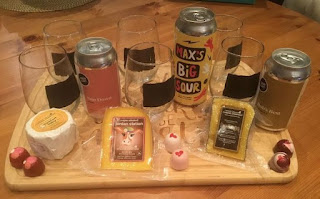 An anniversary present from Heather.  Grain and Grit put on a zoom meeting about beer, cheese and chocolate.  Very tasty combinations. 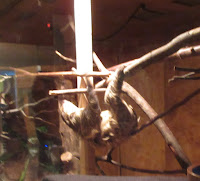 Many years ago we went to the Aquarium in Toronto for our anniversary and yes there was a restaurant.  This year we decided an RBG event would be appropriate.  Under the Canopy offered a display of tropical animals.  At first the sloth was sleeping, but when the caretaker got out the dinner the sloth was very lively compared to our expectations. 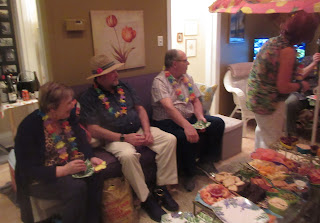 Our long tradition on a New Years' Eve Party was broken by a trip to New Zealand and two years of Covid.  March 5th we assembled most of our previous guests and made it over--we even made it to midnight.  The theme was a Tropical nite. 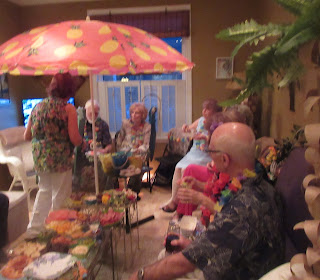 One new and welcome visitor.

A good spread of appetizers. 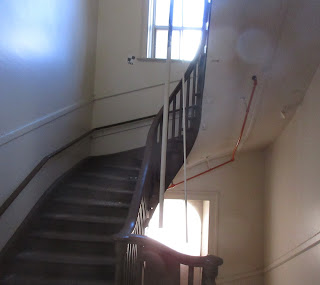 Stairwell in Coppley Building for Doors Open Hamilton.  Given a tour by Terry Cooke. 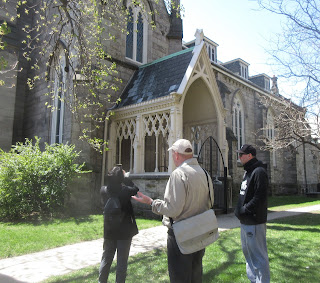 I have long been fascinated with the many murals in walking distance.  Here is a collection of some very interesting ones. 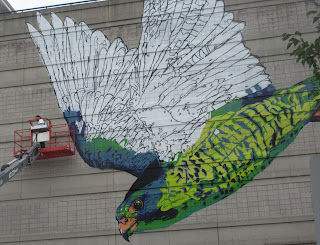 Artist Scott MacDonald in action.  See finished work in blog plus over 60 others and a few other artists.  http://www.therealjohndavidson.com/2022/09/murals-liven-up-hamilton.html 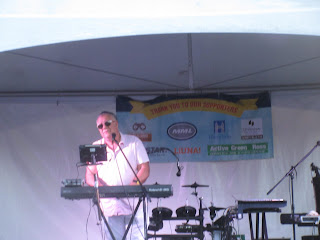 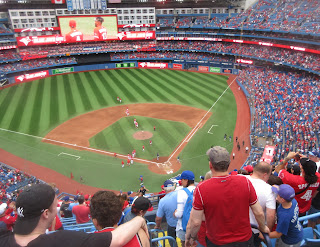 Trip to Port Dover to see Norm Foster play (Halfway There)--reminded me of Haliburton that also claims to be halfway between Equator and North Pole.  I had an interesting restaurant entree tandoori salmon

World Dodgeball Championship were held in Edmonton and they provided opportunity to see Michael after three years.

This is the famous Maori hakka.  The New Zealand team did it at the beginning of each day. 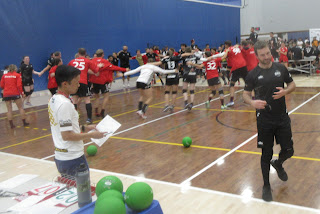 Not sure what this is called, but some teams as sort of a victory dance invite their opponents to also celebrate.  They go arm and arm in a circle until they all collapse. 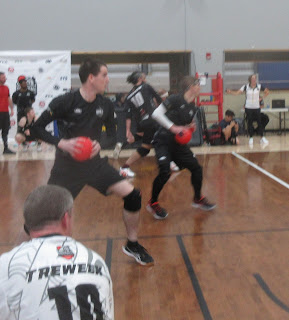 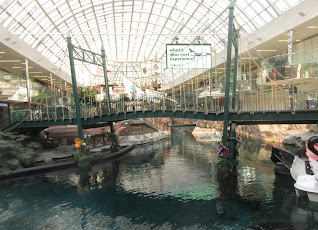 West Edmonton Mall.  It is overwhelming. 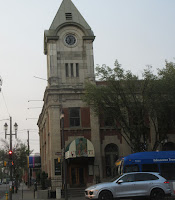 Chianti where we had dinner.   Took photo in a morning that I was seeking some murals.  I thought this was an abandoned Church, but it turns out it used to be a post office.  Actually it is an Italian restaurant that we quite enjoyed, service, ambiance and food.  About a block from our hotel on Whyte Avenue.

At the Edmonton Airport a commemoration of Wayne Gretzsky in a triumphant moment. 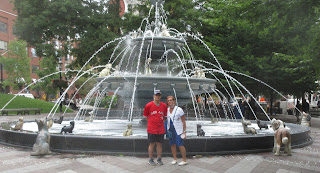 Checking out scenery in Toronto, actually Michael likes to geo cache wherever he goes 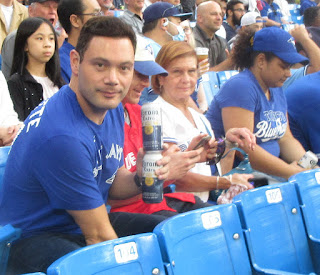 With some Kiwi visitors watching the Blue Jays. 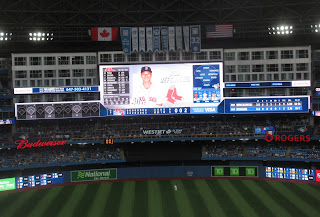 Another Blue Jays trip.  They won 10-1 after a nite of celebrating.  It wasn't actually dark at all. 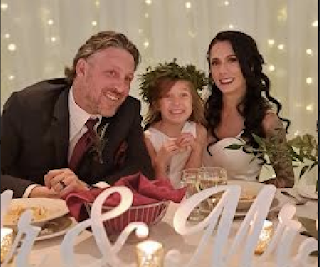 A joyous occasion was when Ryan married Samantha shown here with Emma.  It seemed risky holding an outdoor ceremony on October 22, 2022, but the weather added to the beauty.  A poster to be remembered:  "Pick a seat, not  side.  We will all be family when they tie the knot."   Photo by Sharon.

We went on the trails of RBG  on October 30 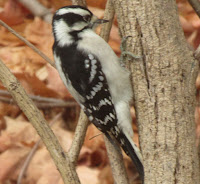 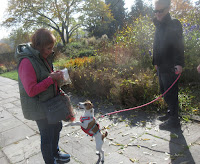 Sharon meets a dog, Ripley and just happens to have dog biscuits on her.

Christmas Eve was differently than had been habit forming.  It was a stage show at Theatre Aquarius, but it was different.  Personal--the actors told their personal stories and they centered around their experience in Hamilton.  Many of their references were familiar.  At the end they closed with a request to contribute to a food bank and personally took our donations in stockings by the front door.  We had a enjoyable meal at Pho B & T. and got set for Christmas. 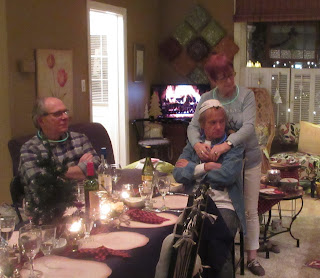 New Years Eve is the closeout of the year.  Getting back into our regular groove.  this year we declared Camp Winealot. 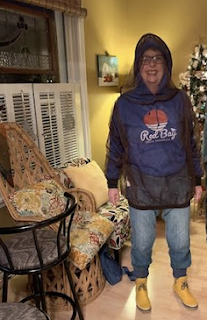 Another good year for watching movies.  Which ones did you also see?  Which ones did I miss?  http://www.therealjohndavidson.com/2022/12/worthwhile-english-speaking-films-seen.html

Among my top favorite movies many were subtitled.  http://www.therealjohndavidson.com/2022/12/films-from-non-english-world.html

Restaurants:  Rapscallion (Beatles brunch), Pho B & T,  Mai Pai on Barton, Afrolicious   A takeout with Persian at  Nannaaa .  While in Edmonton we enjoyed Chianti on Whyte Ave.

Most popular blogs:  Number one dealt with book on "China Unbound" from a Canadian perspective. http://www.therealjohndavidson.com/2022/04/china-unbound.html

Number two was inspired by the Trucker Convoy to Ottawa that I felt was misguided:  http://www.therealjohndavidson.com/2022/02/freedom-and-law.html

Number three was about an Egyptian tv. series partly filmed in the U.S. with an interesting complicated plot.  http://www.therealjohndavidson.com/2022/02/newtons-cradle.html

This honestly has been a better year than last year, but there certainly were pleasant memories in 2021  http://www.therealjohndavidson.com/2022/01/2021-another-disapointing-year.html